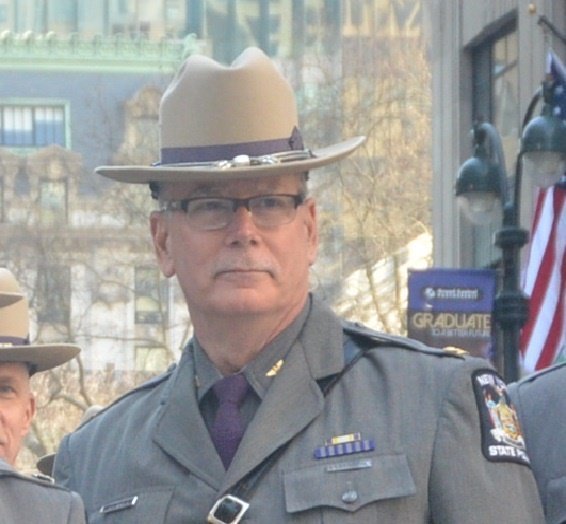 New York State Police Superintendent George P. Beach II was asked by his superiors to resign from the job, which he started about two years ago.

He’ll be stepping down from the job.  It was not clear why he was asked to resign.

“Each day I have served as a member of the State Police has been a privilege,” Beach wrote in the letter obtained by The Post.  “That is why it is difficult for me to inform you all I am retiring, effective January 16, 2019.”

When Beach was named to the top spot, Gov. Andrew Cuomo said he was “…supremely qualified to serve as superintendent.”

In commenting on Beach’s resignation, Cuomo noted that he “…has demonstrated unparalleled integrity throughout his 33-year career and he is truly one of New York’s finest public servants.”
Beach was in charge of the NYSP at the time that Toni Natalie and Joe O’Hara began what turned into a 2-year battle to get backthe computers and NXIVM-related materials that were seized from their residences by the NYSP in October 2013. Throughout that time, the NYSP insisted that per an “internal policy” that it never produced, it would only retrurn the computers if the hard-drives on them had been “wiped-clean”.
Natalie and O’Hara eventually succeeded in court – but not before the NYSP’s attorneys had made one of NXIVM’s attorneys, Paul DerOhannessian, aware of the battle – and started sending him copies of all their correspondence with the judge who was presiding over the matter.
***

Even though this story is about state-level criminal cases, it reinforces the danger of using an insanity defense…

William “Bill” Sutherland, 53, has been confined to state psychiatric centers since October 2000, when he pleaded “not responsible by reason of mental illness” to a felony arson charge.

Fire investigators said he started a fire that caused $100,000 damage to an apartment house in Buffalo – owned by Buffalo businessman Carl Paladino.  No one was injured.

Sutherland’s “not responsible” plea enabled him to avoid prison, but a judge ordered him held in the custody of the state Office of Mental Health for at least six months.

He has now been in the psychiatric hospital for 18-plus years.

For years, state psychiatrists examined Sutherland and maintained he was not ready to be released. Sutherland was recommitted.

Sutherland was charged with felony arson and other offenses. If he had gone to trial in the criminal courts on the arson charge, Sutherland probably would have been a free man at least 10 years ago.

Doctors who examined him called him “dangerously mentally ill” at the time.

He pleaded “not responsible by reason of mental illness.”

According to state officials, there are approximately 495 inpatients  confined to New York psychiatric facilities because they were found “not responsible” for criminal acts due to mental illness.

These patients are referred to as criminal procedure law patients.

Once caught up in the system, it is extremely difficult to escape it and many criminal procedure law patients spend the rest of their lives in psychiatric facilities.

According to Dr. Kristin Ahrens of the Buffalo Psychiatric Center, Sutherland exhibits “ongoing characteristics of antisocial and narcissistic personality disorders.”

Sutherland believes John Gotti was his father, that the devil was trying to invade his apartment, and “people were following him around.”

Prison for Pedos is Dangerous

Christian Maire, a married father-of-two from Binghamton, was sentenced in December to 40 years in prison after the FBI discovered he was the mastermind behind an Internet gang dubbed “The Bored Group.”

Fellow inmates at the federal prison in Milan, Michigan attacked him Friday. He died at a hospital several hours later.

At his sentencing, a female victim forecasted Maire’s demise, the Detroit News reported.

“He’s gonna get the hell beat out of him,” the now-20-year-old seethed.

The Federal Bureau of Prisons is investigating Maire’s death as a homicide.

Police in Italy are investigating whether a pedophile was shot dead by hitmen hired by the dad of one of his teen victims.

Guiseppe Matarazzo, 45, was killed a month after he was released from jail.  His body was found with five gunshot wounds.

Matarazzo was a pastor in Benevento, north of Naples, before he was sentenced to 11-years for sexually abusing two sisters.

One of his victims committed suicide at the age of 15 in 2008, the year after Matarazzo was imprisoned.

Her father is being investigated on suspicion of killing the sex abuser. Two other men, Generoso Nastam, 30, and Giuseppe Massaro, 55, are also under investigation.

Prosecutors believe the pair drove the car used to commit the crime.

Chief prosecutor Aldo Policastro has confirmed that it was a “hired crime.”

Guest View: Clare and Sara Bronfman will abandon Raniere like rats fleeing the Titanic
PELOSI’S WALL, FENCE, AND GATES THAT DON’T WORK BUT …SHE UTILZES ANYWAY…!