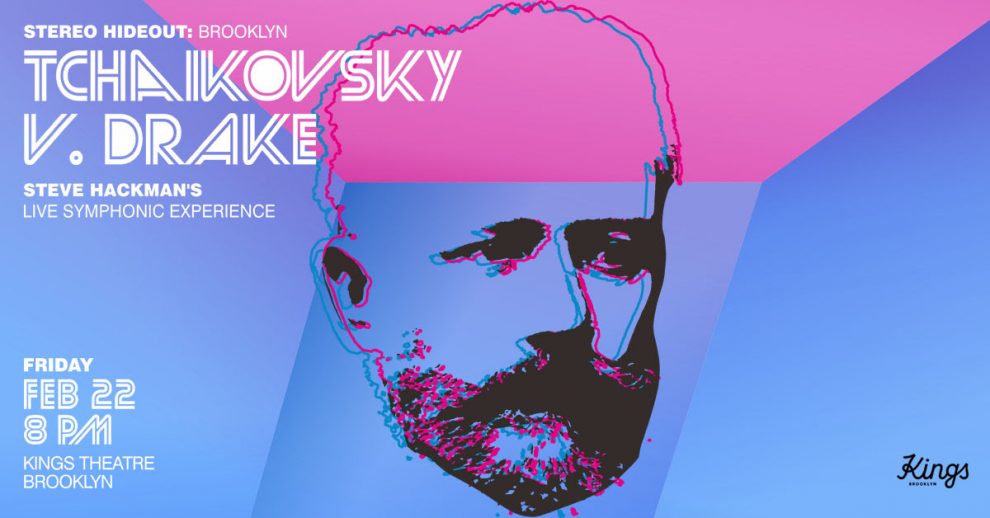 Symphonic Fusion To Include Full Orchestra, Singers, Rapper And More!

Created and arranged by Hackman, Tchaikovsky V. Drake is a symphonic experience that defies boundaries, genre and definition, blending the music of two composer-romanticists separated by almost a century. Fifteen songs of Drake are woven into Tchaikovsky’s epic Fifth Symphony, complimenting and magnifying the emotional narrative of the piece: beginning in anguish (‘Started from the Bottom’) and ending in transcendence (‘Jumpman’).

The Stereo Hideout Orchestra are some of the finest creative virtuosos in New York City. Joining the full orchestra are three guest vocal soloists: Brooklyn native India Carney (Top 3 on NBC’s The Voice and backup singer for Katy Perry), Malia Civetz (Warner-Chappell artist with over ten million plays on Spotify), Mario Jose (YouTube vocal sensation currently on tour with Postmodern Jukebox and Pentatonix), and rapper Jecorey ‘1200’ Arthur (a visionary leader and force for change in the Louisville music scene). Hackman also plays piano for several interludes, and even raps himself at one point.

Says Kings Theatre general manager Tyler Bates, “I’m very excited to be co-producingTchaikovsky V. Drake at Kings Theatre. Steve has one of the most brilliant musical minds I’ve ever encountered and his technique of re-imagining classical compositions to make them accessible to a wider audience is revolutionary and groundbreaking. Like the Brahms V. Radiohead we produced with Stereo Hideout last May, this performance will be incredibly unique and like nothing anyone has ever seen in NYC. It’s with great pleasure that we extend our relationship with Steve and support him as his home in Brooklyn.” Bates was featured in November’s edition of POLLSTAR heading up a uniquely successful run of events since the Theatre’s 2015 post-reno grand opening.

A musical visionary of incomparable gifts, Steve Hackman is a daring voice leading the charge among a new generation of classical musicians intent on redefining the genre. Equally adept in classical and popular forms, his breadth of musical fluency and technique is uncanny- he is at once a composer, conductor, producer, DJ, arranger, songwriter, singer, pianist, and even rapper. He uses those wide-ranging abilities to create ingenious hybrid compositions that blur the lines between high and pop art and challenge our very definitions thereof.

Hackman has sought to create a new path ever since graduating from the prestigious Curtis Institute of Music in Philadelphia. To date, he has melded together the likes of Björk and Bartók, Bon Iver and Aaron Copland and many others. His hybrid works effortlessly blend the classical and contemporary; he has been engaged by many of the country’s leading orchestras, including the Boston Pops, Pittsburgh Symphony and Nashville Symphony. Hackman saw his first performance at the Kings Theatre this past May with Brahms V. Radiohead. A packed out Kings Theatre witnessed the entwining of the former’s masterpiece First Symphony with the latter’s seminal opus OK Computer, all handled virtuosically by the 60-piece orchestra, complete with vocalists. It was Hackman’s first presentation of the work under the moniker Stereo Hideout.

For more information about the Kings Theatre, Brooklyn, visit: http://www.kingstheatre.com