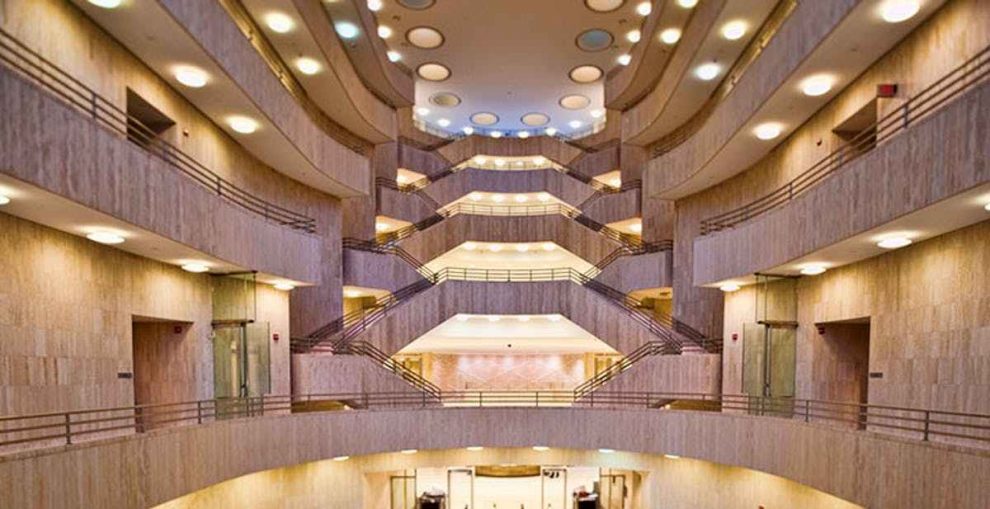 Tom Gargiulo attended the court hearing of Keith Raniere and the other Nxivm defendants [sans Nancy Salzman] on January 9, 2019. He provided us with excellent pictures in his photo essay of the prosecutors and Allison Mack leaving court.  Now Tom has taken to thoughtfully describing his observations in the courtroom in prose.

The US Federal Courthouse in Brooklyn, NY is an imposing structure. Upon entering one notices its multi-tiered cascading levels and a sense of overwhelm arises. It reminds of a prison, except that most are allowed to leave.

Entering Judge Garaufis courtroom on the 4th floor there is a similar feeling with its high ceiling, cold Carrara marble backdrop and only a single window placed far above eye level so that no one can see out or in.

The court was entirely empty upon entrance. Slowly, the players began to arrive and populate the room like the cast of a stage set that would slowly put a drama into motion. First, clerks; then, assistant defense attorneys, prosecution attorneys and then the principal actors and actresses: Kathy Russell, Clare Bronfman, Lauren Salzman and then Allison Mack accompanied by their principal attorneys.

Mack, carrying a large, bulging black knapsack took the position of social chairman and smiled broadly with over-expressive facial features at everyone and hugged Salzman and Bronfman. All the hugging did not seem appropriate considering the grim circumstances. Sex trafficking is not much cause to celebrate anything.

Finally before the stage was set, lead attorney Mark Agnifilo made his entrance looking jovial, comfortable and tanned while sporting an expensive suit and watch that glittered of gold and diamonds. I wondered if Agnifilo grasped the seriousness of the matter as well. But, in a time when “everyone is their image”, all appropriateness has become lost anyway. Finally, the master of ceremonies Judge Garaufis appeared and the stage was set for Keith Raniere to be led through a side door. Raniere was serious, focused and sober. Some may claim his long dyed hair is scruffy but he cast the strange shadow of a melancholic intellectual (a moody Bob Dylan?) behind his strong dark glasses. During the proceeding he was positioned to only make eye contact with the judge and attorneys.

Motions are important because they determine the scope of the trial and how it will unfold. Under argument is the flow of information between the prosecution and defense with defense claiming they are not getting specific information about charges of racketeering, identity theft, sex trafficking, forced labor, coercion and money laundering.

Lead prosecutor, Moira Penza began arguments with a slight and hesitant voice tone. If I were not in court, I’d have thought I was listening to a teenager or young adult rather than a strong, confident lead prosecutor.  Arguments proceeded with Prosecution re-iterating they are not required to give specific information now, can interview everyone in DOS if they want specific information, and they will eventually get specifics two weeks before trial.

Defense demanded specifics and countered that “knowledge and intent” that one is breaking the law must be proved for extortion and forced labor charges etc. and that no serious harm was done.

If the defense is accurate that “knowledge and intent” must be proved, I was left wondering if all the defendants operated from the same knowledge base. For example, is it fair to equate Keith Raniere’s knowledge with Allison Mack’s? In particular, Mack strikes me as someone who is insecure, needs to make herself the center of attention to prove she is likable and is not intellectually focused. She is someone who is easily swayed by her own need to be liked by others and may have had no knowledge or intent to break the law regarding forced labor or extortion charges which make up the heart of sex trafficking. What’s to become of her as other defendants request their trials to be separate or negotiate plea deals?

In the end I wondered why we were all there. The arguments between defense and prosecution seemed like a winnerless, repeating duel with Judge Garaufis preferring the prosecution with his comment “perhaps plaintiff DOS women felt the threat of sanctions”.

And, Garaufis seems a bit taken in by the unreal, celebrity aspect of this trial. In the middle of the proceeding when Mack’s attorney requested a bathroom break, the judge strangely asked Allison Mack if he had seen her earlier in the morning in the court cafeteria! The comment caught me off-guard; but scarily, I was worried he might ask her out to coffee. Fortunately, for all of us, he did not.

In disappointment I kept wondering why weren’t we discussing the real issues: pedophilia, harassment of dissidents who became impoverished or went to jail, lies and deceit about someone claiming to be the smartest man in the world and made claims about creating an ethical civilization but had no ethics himself, and the public servants who lied and enabled him? And, why didn’t we remember the people that died at the hands of Nxivm.