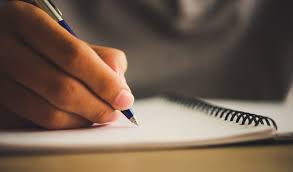 I tend to write much more than I need to, but when I can’t write or get published it’s a very distressing feeling. A good day is when I get articles published in multiple places. My mind tends to become dependent on writing and seems to build up a tolerance to being published.

I find myself writing all day, late into the night and sometimes get up at five in the morning so I can write again. But I do catch myself nodding off in my recliner with my laptop in my well…. lap in the afternoon and early evening. Go figure.

I was nominated for the “Survivor of the Year” for the “Relay for Life” one year and accepted. One of my duties was to give a speech. I started out by writing a speech about my personal involvement with cancer and it was exciting. I felt I needed a hook to engage the audience so I started with humor.

I read my speech out loud for a week so I could get the cadence, mannerisms and inflection down and the day of Relay I was ready.

I went onstage with a thick pile of paper and thought I could feel the unarticulated groan from the people there. At this point I felt I was my plan was working. I dropped the papers on the floor and with great flourish and picked them all up clumsily.

At this point I heard a few muffled giggles. Nobody really knew at this point if I was doing stichk or not. After I composed myself I looked down at the papers and said “I wish to thank the academy, the Hollywood foreign press……” by now there was more quiet laughter but everybody was trying to be polite at this point, still not knowing if this was a comedy routine or a bumbling idiot.

I knew I had had set the hook and I was now ready to reel them in. I then looked up and scanned the crowd and said “Oops wrong speech” and everybody laughed. At that point I had their attention and I read the piece I had written for the occasion. A few people came up to me later and told me that it was the best speech they had ever heard. The heart pounding feeling this gave me made me want more and I thought to myself “I can do this”.

Up until then, I hated writing. Ninety percent of the things I had to write for a school assignment were written on the school bus on the day they were due. No sense in wasting time if we were going to have a snow day and school was going to be closed that day.

I started writing shortly after that I would write about about personal experiences, marriage and my thoughts on driving safety, volunteering and mandatory retirement. I would then submit them to local newspapers, hoping to get published.

After a few of them picked up my work, I started writing about more “hot ticket” issues. Issues that affect us as a city, a state and as a country. These included things that are driving us apart like education, the Vietnam War, the border wall and nuclear power. I got some fans and had some very passionate adversaries complaining about these columns. We all have opinions but I felt I had at least opened the lines of communication.

But writing isn’t successful unless someone is actually reading what you write. I know that it is important in America that we talk to one another about the walls that divide us as a country. That even if we disagree we must have civil discussions about that which comes between us. Any attempt to prevent this is censorship, pure and simple.

I am now being published regularly in three print newspapers, in three online magazines and have had my work published in at least 10 other places.

The First Amendment guarantees “Freedom of the Press” which is the right to circulate opinions in print without censorship by the government. Private entities however can censor the hell out of anything you write and you have, as a reader, the right to read and comment on a piece or just not read it at all. It’s no wonder I love this country.

We all have our own view points but please let us just discuss them respectfully.

Norb is a writer and blogger. His blog is at WhyWNY.home.blog