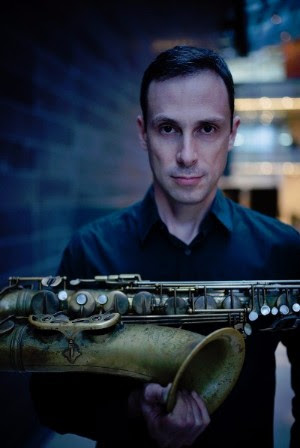 Path of Totality on Whirlwind Recordings to be released February 8, 2019

Six short films will be released between January and June 2019

Internationally acclaimed composer and saxophonist Quinsin Nachoff has commissioned six cutting-edge filmmakers to create original work in response to his new recording Path of Totality out February 8, 2019 via Whirlwind Recordings. The recording features Nachoff’s remarkable ensemble Flux which thrives in the space between genres, styles and inspirations.

Nachoff asked each filmmaker to create an artistic response to miniature versions of individual tracks from the CD.

“I wanted to do something different than a music video and I’ve always loved animation and film,” says Nachoff.  “The compositions on this recording are very expansive and cinematic in scope; they lend themselves well to a creative visual. I provided each filmmaker the background inspirations for their piece and gave them a lot of freedom in their approach. It’s been fascinating to see how each of them interprets the music – both the differences and similarities!”

• Monday, January 14 – Bounce by Lee Hutzulak. The video reflects the piece’s percussive outbursts and thrilling call-and-response built on the mathematical model of a bouncing ball. The film can be viewed at https://youtu.be/EfBNkSxkZx4.

• Monday, February 4 – Path of Totality by Anne Beal, is based on the disc’s title track inspired by the 2017 solar eclipse.
Anne Beal is an animation artist, filmmaker, and installation designer based in Brooklyn. Her fully hand-painted film Balance and Swing premiered at the renowned Annecy International Animation Festival (France) in 2013. Her work has been featured at dozens of international exhibitions including Brazil’s Festival of Electronic Language and London International Animation Festival.  A musician herself, Beal loves to explore relationships among sound and animated imagery. She is developing a watercolor animation and jazz orchestra collaboration with composer Christopher Zuar called Tonal Conversations. The first iteration of the piece premiered in October 2018 at 150 Media Stream, a sculptural video art installation in Chicago. Beal has been awarded artist residencies at the MacDowell Colony and the Corporation of Yaddo in support of her current animated short film This Is Not For You which examines the default male voice in mid-century nonfiction. www.annebealanimation.com.

Udo Prinsen started his career as an animation designer. Having learned many tricks of the trade at Rocketship Animation in Vancouver in the late 90s, he started working as a creator of identity for television and film. In 2000 Prinsen moved to England for the Bristol Animation Course, which was set up by Aardman Animations, the creators of Wallace & Gromit and Chicken Run. He spent a year in England working for Phew TV/BBC Eduation and other production companies and always worked on independent projects on the side. His short film Audition was created with the musical help of Eric Vloeimans and Martin Fondse. Into Spring was made in collaboration with Han Bennink and the short film LOOK!, was inspired by Dutch Sign Language. More recently Udo has been exploring different forms of visual storytelling. Examples are the audio book Last Words in collaboration with Amsterdam Forest; Shapes of Time, an exhibit, art book and musical show based on long exposure photographs created during a Dutch scientific polar expedition to Svalbard; and Wood, a cultural exchange in wood design celebrating the friendship between the cities of Utrecht and Portland, Oregon. www.udoprinsen.com.

Željka Blakši? AKA Gita Blak is an interdisciplinary artist who currently lives and works in New York City. She studied at the Academy of Fine Arts in Zagreb and the Jan Mateiki Academy of Fine Arts in Krakow. In 2010 she received her Master of Fine Arts with Distinction from the School of Visual Arts in New York City. Recent exhibitions and performances include D’EST at Filmwerkstatt Düsseldorf; a group exhibition Performing Words, Uttering Performance curated by TOK and Inga L?ce; Trauma & Revival project, group presentations at Bunkier Sztuki Gallery in Krakow; The Witnessing Event curated by Rashmi Viswanathan at Los Sures Museum in New York; and exhibitions and performances at Framer Framed in Amsterdam, Museum of Modern Art in New York, Recess in SoHo, Herzlyia Museum, Gallery Augusta in Helskini, among others. She was a recipient of the Residency Unlimited & National Endowment for the Arts Award 2017, Session Residency and Via Art Fund Grant 2016, 2014/15 AIR Gallery Fellowship in New York, the District Kunst und Kulturförderung Studio Award in Berlin, and the Paula Rhodes Memorial Award in New York City. www.gitablak.com.

JiYe Kim, born in South Korea in 1984, is a Brooklyn-based artist and film editor. She has worked on a number of films and art projects, ranging from narrative to documentary to experimental. Her most recent editorial credits include High Maintenance (HBO), Share (A24), Halston (Sundance Film Festival), Her Smell (Toronto Film Festival), AlphaGo (Tribeca Film Festival), and others. She has worked with artists Anita Thacher, Judith Barry, Karen Azoulay, and Barbara Hammer. In her artwork, she often works in a variety of mediums—video photo, prints, and installation, building a world using cinematic language. She holds an MFA from the School of Visual Arts, and a BFA from the Korean National University of Arts. www.foundincafeteria.com.

• Monday, June 3 – Trent Freeman’s film for the recording’s closing track Orbital Resonances, which is based on the intersecting pathways of orbiting bodies in space.

Trent Freeman is a Juno Award-winning musician whose unique approach to film has led him to create music videos for Grammy nominees and Juno winners. His inventive eye for the abstract and his celebrated musical mind lead to a seamless connection between music and visuals as he turns kinetic sculptures into an immaculately captivating reflection of sound. www.trentfreeman.com.