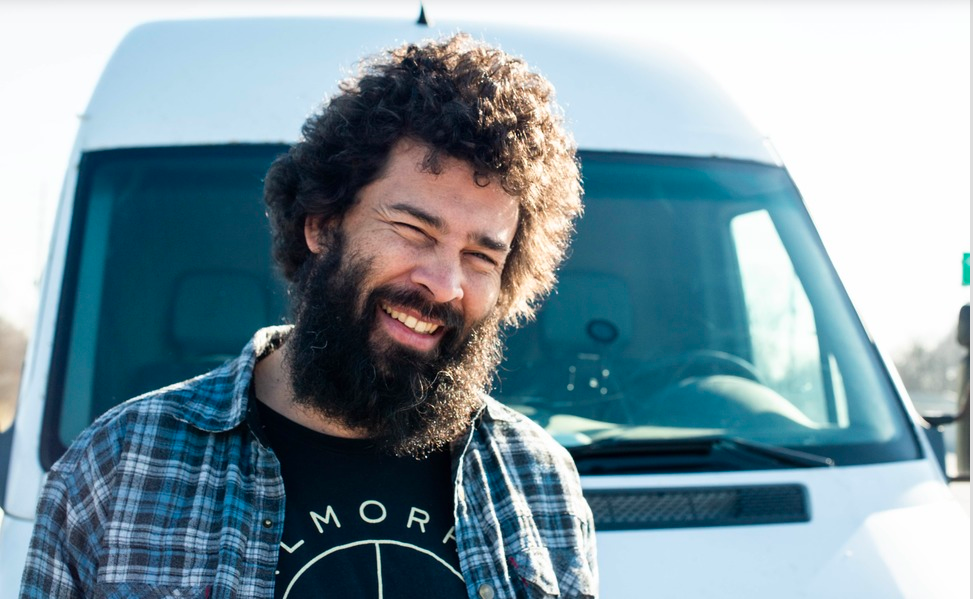 C.J. Boyd has shared his new track “Ride Blind” on The 405. Prior to this, Boyd announced his new concept release Kin Ships on Brooklyn Vegan. When speaking about the project Boyd says, “First, each song is recorded in a different state, and in that state alone, secondly, each song is a cover of a person or band from that state with whom I have played shows. That means I recorded 51 songs, each one in a different state (plus DC). Every song is a cover, and I only covered songs of people with whom I have actually shared a stage.”

The 4-CD set will be out 2/8 on Joyful Noise Recordings along with a digital sampler consisting of 13 songs. The entire 52-song digital version will be available later this year.

C.J. Boyd has literally spent the last ten years of his life on tour. Boyd refers to his obsessive dedication to the road as the InfiniTour. As the ten-year anniversary of the InfiniTour approached, both Boyd and his label (Joyful Noise Recordings) decided the occasion should be marked with the release of a commemorative album. But no ordinary album would suffice, the project would have to match the expansive scope of the massive endeavor being celebrated. From this idea Kin Ships was born.

Kin Ships is a sprawling four disc collection documenting the vast assortment of people and places Boyd has touched, and been touched by over the last ten years. The album was created in accordance with a strict set of guidelines. “First, each song is recorded in a different state, and in that state alone,” Boyd explains. “Secondly, each song is a cover of a person or band from that state with whom I have played shows. That means I recorded 51 songs, each one in a different state (plus DC). Every song is a cover, and I only covered songs of people with whom I have actually shared a stage.”

Despite his adherence to these rules, Boyd’s experimental approach to making music remains intact. Throughout the album Boyd is aided by an enormous cast of collaborators, Kin Shipsfeatures 80 guest vocalists, and 175 guest musicians. Boyd’s multilayered bass and vocals are accompanied by all manner of instruments, including theremin, marimba, kalimba, church organ, and saw just to name a few.

Kin Ships traces Boyd’s winding path across the United States, making use of manyunconventional recording spaces along the way, from an A&W parking lot in Wheatland, Wyoming, to an abandoned grain silo in Buffalo, New York, to the bathroom in the Delaware House Travel Plaza on I-95 in Newark, Delaware. But Boyd is quick to assert that the American landscape framing his sonic adventures is merely circumstantial – none of us get a say in deciding where we’re born, right? “I have absolutely no allegiance to the US or any government,” Boyd emphasizes.

Though Boyd didn’t set out to create a celebration or critique of the United States, some commentary was inevitable. In the liner notes, Boyd shares memories of his encounters with Occupy Wall Street in New York, and the Standing Rock protests in North Dakota. One of the most memorable moments on Kin Ships is Boyd’s somber reading of Adam Matlock’s moving “Song For Ferguson”. In his commentary on the song in the album’s notes, Boyd explains how his bi-racial heritage has shaped his views on race and justice in America.

Boyd’s love for the music and musicians he’s encountered on the road is palpable. At times Kin Ships feels like an intimate curated tour through 21st-century DIY music in America. Boyd has collected an impressive catalog of songs here, including many overlooked and under-appreciated gems. There’s a recurring theme of movement present throughout the music on Kin Ships, reflecting the constant motion of touring, and our continual push towards meaning and purpose in life.

Kin Ships aims for something larger than a standard-issue album, it’s a musical journey that provides listeners with space to explore. Like a great novel Kin Ships takes time to unfold, and sticks with you long after the story has ended.