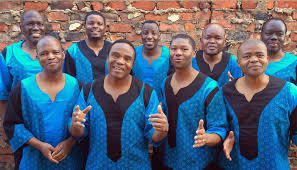 The South African all-male choral group sings from a traditional music called isicathamiya (is-cot-a-ME-Ya), which developed in the mines of South Africa.

The group was founded in the early 1960s by Joseph Shabalala, then a teenage farm boy living on the lands just outside the small town of Ladysmith, in the province of kwaZulu Natal, half-way between Johannesburg and Durban. The singers’ early ability won so many awards at the local South African competitions, that by the end of the 1969 the group was banned from competing. However they were always invited to attend as entertainers.

During the 1970’s Ladysmith Black Mambazo established themselves as the most successful singing group in South Africa. In the mid-1980s, American singer-songwriter Paul Simon visited South Africa and incorporated the group’s rich harmonies into the famous “Graceland” album (1986) – a landmark recording that was considered seminal in introducing world music to mainstream audiences.

A radio broadcast in 1970 opened the door to their first record contract, the beginning of an ambitious recording career that currently includes more than 70 albums, earning 19 Grammy Award nominations and five Grammy Award wins; “Shaka Zulu” (1988), “Raise Your Spirit Higher” (2004), “Ilembe” (2009), “Singing For Peace Around the World” (2013), and “Shaka Zulu Revisited” (2017).

In addition to its work with Paul Simon, Ladysmith Black Mambazo has recorded with Stevie Wonder, Dolly Parton, Sarah McLachlan, Josh Groban, Emmylou Harris, Melissa Etheridge and many others. They have provided music for many movies, have appeared on Broadway where they were nominated for a Tony Award and even had a documentary film, titled “On Tip Toe: Gentle Steps to Freedom, the Story of Ladysmith Black Mambazo,” nominated for an Academy Award.

Ladysmith Black Mambazo carries a message of peace, love and harmony as they travel the world year after year. They bring this message, in song and dance, to every theater they perform in. See more at www.mambazo.com.

Reserved seating tickets for Ladysmith Black Mambazo are $28 to $38 plus service fees and are available at the Smith Opera House Box Office or online at www.thesmith.org.

The Smith Center for the Arts, stewards of the historic Smith Opera House, provides diverse arts and educational enrichment opportunities year-round for Finger Lakes residents and visitors. The Smith Opera House is at 82 Seneca St. in Geneva, NY. Box Office hours are 10 a.m. to 4 p.m. Tuesday through Friday. For more information, call 315-781-5483 during box office hours or visit www.thesmith.org.