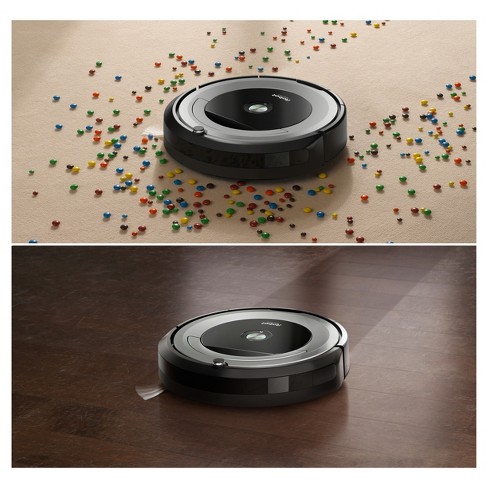 We have a couple of residents at our house. We don’t have to feed them. They never need a doctor’s appointment. We don’t have to take them anywhere. And here’s the best part, they never make a mess. In fact, they clean up after us humans. These tenants roam around the house every day cleaning up the crumbs and debris left behind by us.

Yes, our “tenants” are robots. Not the kind you see on TV with legs, arms and a head. No C3PO or R2D2 here. These robots are the kind that vacuum our floors on their own. I had been watching these for quite for a while and I read several rave reviews on the internet from people who had bought a vacuuming robot of their own. When the one I was reading about finally went on sale, I jumped at the chance to get one. It is a workhorse, cleaning the living room, dining room, kitchen and the master bedroom suite.

It worked so well that I bought a second one for upstairs. We now have downstairs and upstairs “maids” as we jokingly call them. The upstairs maid even speaks to us in a feminine voice whenever she gets stuck. But even cooler than that, we can program her to speak to us in French. I always wanted a French, upstairs maid.

In the time they have been roaming around in our house, vacuuming up dirt, crumbs and hair I’ve grown rather fond of them. They’ve quickly become like a regular member of our family. But they are vastly different than rest of us. They only need to be asked once to do thier work, they never complain, and they never say they’ll get to it later. They never roll thier eyes, sigh heavily or conveniently forget because they are too busy playing video games or texting.

And, OMG, are they efficient. With just a touch of a button, they take off randomly patrolling our floor in their mission to find and collect as much dust, lint, hair and crumbs as they can. Fragments left behind by the rest of us. All they ask is that we empty their dust collection bins after they are done with their work. It’s astounding to see just how much stuff they pick up each time we use them. I never knew that we were that dirty.

These technological “employees” even have remote controls that allow me to choose what days and what times I want them to do their job. That way, I can program them to work when we are not home so we can come home to a clean house.  What’s not to love?

I really admire their work ethic. This flat, round workhorse will vacuum until they have expended almost every bit of energy they have and then they will slowly, ever so slowly, roll their way back to their home bases and gently ease themselves into their dock to recharge. They never call in sick, never have to leave early or ever come to work late. I don’t have to worry about taxes or liability insurance and if one of them breaks by falling down the stairs, I just throw it away and get a new one.

Because they are so thin and low to the ground, they can go many places that an upright vacuum hasn’t been in many, many years. There’s something so very satisfying about resting on the couch after a long day at work, watching TV, and having a robot wheeling around sucking up the dirt and grime that has managed to get into our carpets.

My wife never wanted a Roomba but now that she has one, one more household chore is done for her. I never thought it could do as great a job as it does though and I am surprised just how much dirt and grit is in its collection bin every time we run them. I also like how they leave vacuum cleaner wheel marks everywhere they go.

Of course, they are not without fault, nor do I think they would be. Every now and then, they get stuck on something, trapped under my recliner or entangled in a lamp cord. If I don’t hear them running, bumping into things like a drunken sailor or see them charging on their base, I know I have to go looking for them like a high tech game of hide and go seek. Once we find them, we pick them up and return them to their home base so they can recharge for the next time.

So here’s to the robots who save us time and take us a little closer to Rosie the Jetsons’ maid and housekeeper of the future.

An interesting housekeeping robot just debuted at the Consumer Electronics Show in Las Vegas. Click here not only can it clean your floors, it can fetch you a beer.

You can follow me on my blog at WhyWNY.home.blog

Guest View: Who is really the brains behind the Bronfman trust that pays the attorneys in Nxivm case
More on Hi Caliber- and Knutilla: ‘Who’s caring for the 20-30 horses now?
Comment