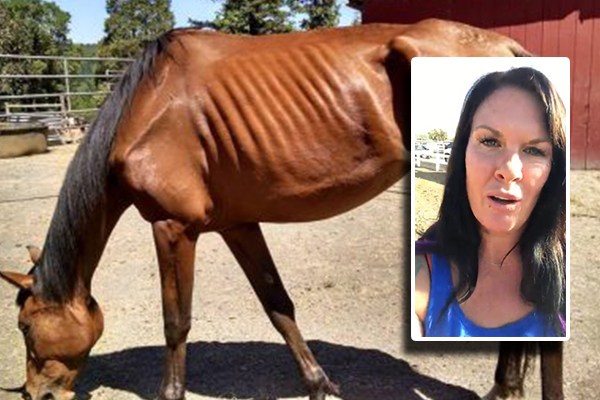 [Frank Report is dedicated to airing both sides of an issue. Since we have had several articles condemning Michelle Knuttila, lately of HiCaliber Horse Rescue, it seems only fair to allow at least one defender to voice her opinion. This is done in the interest of fairness. Undoubtedly people will respond and some I am sure will disagree. This too is good and I will publish the dissenters opinions too.]

I am a true horse lover.

Their ignorant criticisms fall under two categories – alleged cruelty to horses – including euthanasia and alleged financial fraud crimes allegedly perpetrated by the operator of the Rescue Center, the much maligned victim of their attacks, Michelle Knuttila.

The false animal cruelty allegations range from neglecting horses after purchase, not providing food or water, transporting it to the ranch in unsafe conditions, making horses live in unsanitary environments, not giving them proper medical care and unnecessary euthanasia.

All of it is false.

But let me ask you this simple question:  What would have happened to those horses if Michelle had not stepped forward to rescue them?  Most of them would have wound up in the slaughterhouse pipeline – suffering terribly.

Michelle Knuttila is a hero to horses.

Yet the vicious attackers – which now I must include Frank Parlato – created controversies surrounding HiCaliber which caused her so much harm. But the true victims are the horses. Never forget that.

And just as earlier unfair reports seem to have triggered bogus investigations by the California Veterinary Medical Board, the Attorney General, the San Diego DA, Humane Society and the Ontario Police Department,  Parlato’s report, with his large readership, and his bogus allegations, I heard, may have now triggered a federal investigation. And everyone knows how unfair and corrupt the FBI is.

How much grief does one woman deserve? This woman saved over 1000 horses. Now you want to see her in jail?

Michelle Knutilla was 100 percent dedicated to the protection and rescue of abandoned and abused horses. She went out of her way to save horses. She strained and sweated and pleaded with people to get the money to save horses at livestock auctions, local shelters, Craigslist postings, owner surrenders and other reputable rescue organizations. Not to mention owners who sold her horses that were too sick or too lame or thin to be accepted for sale even at the auctions.

She took in the horses that nobody wanted. Who else would take them all in?

If there is a heaven for horses and people who love them, then Michelle will be the archangel there.

And the horses were comfortable and properly secured for safe transportation. Sometimes – in order to save more horses, a horse like the often mentioned Galle had to suffer a tiny bit. But how much more Galle would have suffered if Michelle did not come to the rescue.

Galle was lame and could not bear weight on one of her legs. But Michelle did not create the lameness. Critics said she should have called a vet on the spot – but what could the vet do in the parking lot of the auction? It is just nonsense. She had to bring Galle to HiCaliber where the horse could be cared for or if the vet said it was unavoidable to humanely euthanize Galle.

And how wonderful are Michelle’s videos. She tugged at the heartstrings of thousands of good people – getting them to do something for horses. People who never cared or thought about the suffering of horses before suddenly became aware that horses suffer and much like people..

Michelle is a saint in this respect. A messenger of goodness and greatness for the protection of horses.

Michelle was busy creating live videos of sick and suffering horses from the auction, raising money to save more of them and this is bad?  How do you think horses are to be fed and care for without money?

Once the horses got to the ranch they were so happy. It was a haven compared to where they came from and where they would have otherwise gone – the slaughterhouse pipeline.

The pens were decent for the most part. Sure there was manure. If you have horses, you will have horse manure. Horses are used to it.  It startles me how all these vicious ladies attack Michelle, but what have they done?  Did they offer to clean up horse manure? Did they ever rescue a horse?

Then the critics condemned us for euthanizing horses that could not be rehabilitated.  Michelle taught us that euthanizing is a form of rescue in itself.   It makes sense to do it expeditiously to save the poor creatures from pain and suffering and save on expenses (which is not a bad thing – for every dollar saved is another dollar used to save horses].

Michelle told me that gunshot euthanasia is the fastest, quickest, stress free method for the horses that we cater to.  Euthanizing saves them from the slaughterhouse pipeline to Mexico, where they are treated brutally, hung upside down alive, starved on the way, then killed with multiple strikes or shot anyway after being terrorized.

Michelle, with all the love in the world, came gracefully before the horse and whispering to it messages of love, quickly and humanely shot it ending its terrible misery. If I were a horse suffering so badly I would rather see Michelle before me than be ripped apart at the slaughterhouse.

In most cases, Michelle gave the horse extra time to live and gently led it to the great beyond. I pray there is a horse heaven for these beautiful dear creatures.  And I know that Michelle never euthanized a horse that a veterinarian did not first declare was beyond hope.

But even if she did not Michelle knows at least 90 percent of what vets know. She performed surgeries and administered medicine which saved horses lives.

A lot of people (other than Michelle) are against buying really harmed horses from the abusers, Michelle sought out abused horses and saved them. Some of them she humanely euthanized.

And people who donated got their money’s worth. They saved the suffering horses from the slaughter pipeline.

Sure Michelle sometimes uses colorful language. So what? This is just sexism. If it was a man no one would say a word. People are just jealous that she does so much good that they have to pick on her over little things. Someone condemned Michelle because she made a video of chopping and cooking horse testicles.  But the horse was castrated by a vet. Normally wasteful people would throw out the testicles. But they are healthy and considered a delicacy in some lands. So she ate them. To me this is wisdom. This is not wasting. It is not like she cut off the testicles to eat them. They were cut off as part of an appropriate medical procedure.

In 2016, HiCaliber reported over a million dollars income but they only had $27K left over after all the heavy expenses of running such a wonderful enterprise.  There was absolutely no salary or compensation for Michelle. This selfless woman who sacrificed her life to caring for horses without pay, is now accused of fraud by her critics.

The critics claim she used a few dollars on late-night fast-food and bar tabs, etc.  This is no badge of fraud.  You have to entertain potential partners and donors and others.

How hard it was for Michelle with the enormous expenses in maintaining horses and euthanizing them.

But her critics won the day. They got her closed down. Shame on you Shedrow. For shame Jennifer Marek. For shame Barbara Benson. You closed her up alright.  You say good riddance but because of you tonight somewhere a horses is headed to the slaughterhouse that Michelle might have saved.

She could have been the biggest horse rescuer in the nation. She had that much talent and love.

She could have ended the slaughterhouse pipeline. But her jealous enemies would not stand for it.

Sometimes I wonder if the anonymous Shedrow is really an agent for the slaughterhouses?

How many horses did Shedrow ever save?

How many of the horses, that Michelle would have saved, went to the slaughterhouse this week?

Michelle might be the Angel of Death for poor horses.  But Shedrow and the others – and I include Frank Parlato (who already destroyed a wonderful self-help group and destroyed the acting career of beautiful Allison Mack and many other women) – as part of the cadre I call “the Demons of Death.”

Let us all get on board and support getting Michelle back in the horse rescue operations again and stop the slaughterhouse pipeline. We can do it.  Donate to Michelle.

Heidi: Scientology proprietary info was secreted to Keith Raniere – at his request
One Night in Bangkok: The Judge Must Put a Leash on Marc Agnifilo
Comment