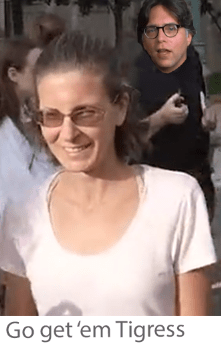 In his latest ruling on this matter, Judge Nicholas G. Garaufis basically slammed the door on the outstretched fingers of Clare Bronfman and Kathy Russell – who both want to be able to freely interact with all of their former NXIVM associates.

In his “Memorandum & Order”, Judge Garaufis, the presiding judge in the case of U.S. v. Raniere Et Al,  issued his ruling as to which NXIVM-related people Bronfman and Russell can communicate with while they are awaiting trial on various criminal charges.

Per Judge Garaufis’ latest ruling, Bronfman is prohibited from having any contact with any of the following individuals unless that contact takes place in the presence of her attorneys:

(2) Anyone whom she knows to be – or believes to be – a current and/or former member of DOS;

(3) Anyone whom she knows to have been – or believes to have been – employed by or to have worked as an independent contractor for NXIVM (and/or any affiliated entity) in the capacity of video-editing; and

(4) Anyone who was listed on the prosecution’s list of alleged victims that was set forth in the superseding indictment.

With one exception, Russell has the exact same prohibitions. The exception is that Russell can communicate with current and/or former members of DOS [provided they are NOT on the Nxivm Coach List.]

Not much was gained or changed for Bronfman and Russell since they pleaded with the judge to let them communicate with their longtime friends and associates.

Per the original bail conditions that were imposed on Bronfman and Russell following their indictment on July 23, 2018, neither of them were allowed to directly or indirectly associate or have contact with – except in the presence of their attorneys – (1) any current or former employees of, or independent contractors for, NXIVM and/or any of its affiliated entities; and (2) any individual who was ever on the “Stripe Path” within NXIVM.

In addition, Bronfman was not allowed to directly or indirectly associate or have contact with any current and/or former member of DOS.

On August 20, 2018, Bronfman requested that Judge Garaufis expand the pool of NXIVM-related people with whom she could interact.

On September 14, 2018, Russell submitted a similar request to Judge Garaufis.

Things had seemed hopeful for a brief interlude.

On December 12, 2018, Judge Garaufis ruled that the original “no-contact” provisions that were imposed on Bronfman and Russell were too broad – and ordered the prosecution to submit new, more limited provisions.

Thereafter, the prosecution submitted its proposed new proposed “no-contact” provisions – and the attorneys for Bronfman and Russell responded to that proposal.

Per the prosecution’s proposal, Bronfman and Russell would be prohibited from having any contact with any of the following:
(1) Anyone who was on the “NXIVM Coach List” as of March 2017;
(2) Anyone whom they know to be – or believe to be – a current and/or former member of DOS;
(3) Anyone whom they know to have been – or believe to have been – employed by (or to have worked as an independent contractor for) NXIVM and/or any affiliated entity in the capacity of accounting, bookkeeping and/or video-editing; and
(4) Anyone for whom a visa was sought based on their affiliation with NXIVM and/or any affiliated entity.

So, the “good news” for Bronfman and Russell is that they can now communicate with approximately 15,700 people who, according to NXIVM, have taken one of its training courses and don’t fall into one or more of Judge Garaufis’ “no contact” categories.

The “bad news”, of course, is that neither of them would ever stoop to communicating with such low-level people.

In essence, Judge Garaufis has ruled that Bronfman and Russell can continue to be members of the NXIVM Country Club.

But they can only hit balls on the practice tees – and can only talk to the caddies and not the members.

And don’t even think of going into the clubhouse!

Congratulations to Bronfman and Russell.

And a hearty “Well done” to their attorneys who worked so hard – and billed so many hours – to achieve this grand result for their clients.

Shadow: Since 2009, the ample Bronfman pocket book has owned and operated NXIVM.
Heidi: Scientology proprietary info was secreted to Keith Raniere – at his request