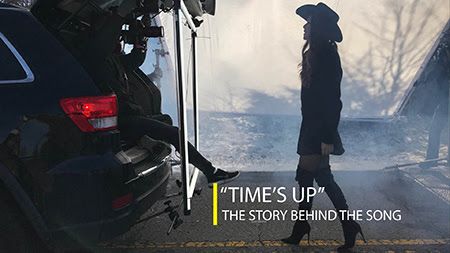 One year ago today, the all-female, singer-songwriter collective Song Suffragettes released the original song and music video for “Time’s Up”, a musical nod to the female empowerment movement that began in January of 2018. The song went on to receive major media coverage, critical accolades and ultimately raised $10,000 for the Time’s Up Legal Defense Fund through single sales and streaming. In celebration of this anniversary, Song Suffragettes just released “’Time’s Up’ – The Story Behind The Song” via their YouTube page which has amassed over 2.6 million views to date.

After the song and video were released, the intense media coverage included the Associated Press, USA Today, Washington Post, San Francisco Chronicle, Voice of America, U.S. News & World Report, Billboard, Rolling Stone, CMT.com, TasteOfCountry.com, SoundsLikeNashville.com and Grammy.com. Most recently, the song was one of sixteen songs featured on TuneIn’s Country Roads “Fab Females of 2018” radio special. TheShotgunSeat.com named the song one of the Top 20 Singles of 2018 calling it “arguably the most important song released in 2018.”