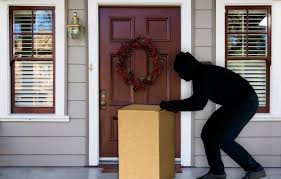 I have enjoyed viewing a video posted by a former NASA engineer who created a piece of equipment to get even with thieves who were grabbing packages off his front porch (https://www.youtube.com/watch?v=xoxhDk-hwuo). He has posted this video showing the perpetrators getting covered with by a glitter bomb and with Fart Spray that started trending on YouTube. It received over 50 million views in the weeks just before Christmas.

This does not surprise me. Thieves called “porch pirates” are more and more common in the age of on line shopping. They hide in neighborhoods ready to steal packages that are recently delivered by UPS, FedEX or the Post Office. Millions of Americans have fallen prey to porch pirates, creating an industry of doorbell cameras and other video-surveillance devices. Local police are also running stings to try and stem the epidemic.

Some lawmakers are even thinking about legislation that would punish these doorway bandits. According to 18 U.S. Code § 1708, the penalty for theft or receipt of stolen mail is imprisonment not more than 5 years or a fine up to $250,000. In addition, the perpetrator may be subject to additional state prosecution.

Precise statistics on porch pirating aren’t really available since many people don’t even bother to report it to the police, especially since Amazon and some other online merchants will often refund money for a stolen item. But a survey by the packaging company Schorr found that about one-third of respondents claim to have been victimized. Another study has estimated that 26 million Americans have had parcels purloined.

Over the last few years, package pilfering has gone from a crime of opportunity, in which someone who happens to spot an unattended item on a porch grabs it and runs, to an organized activity. Today, thieves trail UPS and FedEx trucks, then snatch gifts left unattended. One San Antonio case was an inside job: One of the accomplices was a UPS worker. In another case, on Halloween, a Sacramento woman brought her kids along, in costume, as she snatched packages. In some cases, police, armed with search warrants, have found dozens of packages in the homes or vehicles of those who are apprehended for these heists.

The rise of porch piracy is one reason the sales of home monitoring systems are soaring, especially so-called doorbell cameras that film people who approach your home. Invented merely six years ago, the doorbell cameras are now a $500 million annual business. Online retailers are also fighting the problem. Amazon.com, now offers a “key” service where customers can have a single use electronic “key” connected to their doors, and a delivery person can use a this code to open the door for just enough time to drop off the package inside your house before the door locks again. Another device does the same thing for your car, allowing the door to be unlocked just long enough for the driver to put the packages inside.

As reports of these thefts grow, local cops have gotten even more aggressive about pursuing the crooks. Police in Jersey City have responded to a pandemic of porch pilfering pirates before Christmas that even victimized Mayor Steve Fulop. City cops have partnered with Amazon in a sting that involved leaving packages with GPS devices in them on porches in neighborhoods where the thefts were common. This allowed the police to track down the thieves.

Still, despite their best efforts, police make arrests in less than 10 percent of porch pirate cases reported to them. Criminal penalties are hardly a deterrent, either.  In most cases, even when police nab a thief with a package, the perpetrator is only charged with a misdemeanor and they will rarely face jail time, unless cops can tie him to other thefts.

Home delivery now contains more than just gifts, it also includes medicine and important products for the elderly and the home bound. I have my monthly prescription of Chemo drugs delivered to the back porch. These drugs cost over $10,000 a month and I can’t afford having them stolen. There isn’t a market for them but you can’t tell that from the outside of the box.

South Carolina, is proposing a tough new law. The “Defense Against Porch Pirates Act”, will make it a felony to pilfer packages off a porch. Violators would be subject to mandatory fines and jail time with no chance of probation.

New York lawmakers most likely won’t embrace legislation that deals so harshly with a crime which, even though it’s becoming more common and organized, is also the kind of mischief that local teens often engage in.

But the popularity of the NASA engineer’s revenge video (even amid reports that portions of it were staged) is a reminder that the growing prevalence of porch package piracy permits plenty of people to feel perturbed (sorry I had to do it).

I don’t understand the need for additional laws because there are already laws on the books to cover the actions of porch pirates. Stealing mail is federal crime and in New York State, larceny is covered by N.Y. Penal Law § 155.05. Both of these provide for punishment by a fine and/or a prison term. We don’t need more laws, we need enforcement of the existing ones.