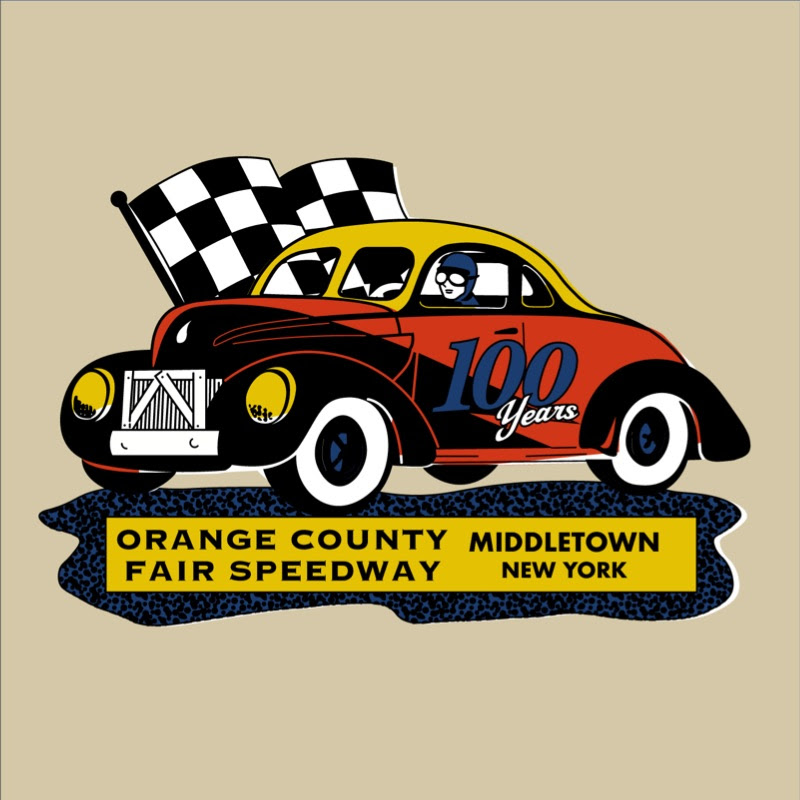 Orange County New York is home to one of racing’s hidden gems and a true historic site, a ? mile dirt track located in the heart of the Town of Wallkill that has been continuously operated since 1919, making it the oldest in the nation.  While New York state plays host to a number of dirt short tracks, none have as rich or interesting a history as what has long been known as “The Orange County Fair Speedway.” In addition to races, cars also compete Demolition Derby’s and get pretty banged up during the excitement.

At the time of the first automobile race on August 16, 1919, “OCFS” was known as “The Harry Clay Oval.”  It had been constructed in 1857 at the Orange County Fairgrounds as a horse racing track. Despite the existence of older horse tracks, The Harry Clay Oval/OCFS may be the oldest continuously operated racing facility in the world.  Starting in 1913, auto racing enthusiast, George Martin lobbied to bring cars to the track, eventually succeeding in 1919 assembling a field of drivers for a crowd of 5,000.

That first race, run mostly by cars with Duesenberg motors, was won by James Benedict of Katonah, NY, driving the “Benedict Special”.  To Martin’s relief, the races were a huge success, with fair directors admitting that by next year, they’d need to accommodate a much larger crowd.

Auto racing at OCFS would continue regularly for the next 100 years, excluding a short government mandated break during WWII due to metal and gasoline conservation efforts.  In 1946, full time racing returned to the newly dubbed “Victory Speedway,” now officially an auto racing track featuring “American Racing Drivers Club” sanctioned Midget Car racing.  Stock car racing officially began at the speedway on September 18, 1948 as Rocky Dinatale is credited with the first-ever stock car win. The first fully contested championship season began on April 16, 1950 and the first race of the season was won by Tex Enright driving the no. 407 Modified coupe.  Eventually, Victory Speedway would transition into being known as “The Orange County Fair Speedway” as it is still today.

Now, in 2019, the track referred to by some as “The Hard Clay” or “The House of Power” features some of the most exciting racing action you’ll see in the country.  Many racing legends like Mario Andretti competed in Middletown early in their careers.  Even Nascar stars like Tony Stewart are known to make yearly appearances, but all season long, local grassroots stock car teams can be seen giving their all in 850+ HP V8 powered Dirt Modified race cars, battling for the OCFS Championship.  For around the same price as a night at the movies, your family can witness this spectacle that has captivated fans for 100 Years.

Orange Motorsports and Entertainment, the new managing company at OCFS as of 2018, will celebrate this hundredth season with a special 3-day Centennial event in August as well as specially curated, year-long tributes to OCFS’ history and legendary cast of drivers, car owners, car builders and track personalities.  Weekly events will feature live music at “The 31st Lap Tavern” the track bar where fans and racers meet for drinks, delicious food and of course some racing talk after the night’s events. Fans of racing, history, Americana, car culture, classic cars or just those looking for a fun night out with the family will be treated to a season steeped in nostalgia, local history and the finest racing you’ll see at this newly upgraded facility.

2018 saw the restoration of OCFS’ half covered grandstand, the addition of party deck seating with high top tables for four, new turn 4 bleachers, new restrooms, new VIP areas, new official merchandise store, the return of the “Super DIRTcar Series” and more. With last year’s upgrades, OCFS offers a more comfortable experience for all in this unprecedented anniversary season.  It all starts the first weekend in April, 2019 with The Short Track Super Series’ “Hard Clay Open,” followed by the OCFS 100th Anniversary Season Opener on Saturday, April 13th.  For a preview of the season to come, fans are encouraged to attend our 2019 Motorsports Show on March 23rd – 24th where they can get up close and personal with the cars, drivers and teams.

William W. Storrs Retrospective Exhibition public opening on Saturday, January 20th
A Tribute to the music of Heart with special guests The Fleetwood Mac Experience live at The Rapids Saturday, May 4th