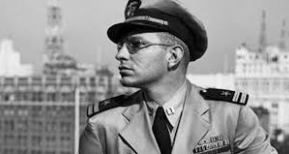 In an earlier post Frank Report looked at the similarity in philosophies about handling enemies of L. Ron Hubbard, founder of Scientology, and Keith Alan Raniere, founder of Nxivm.
The principle difference between the two men’s philosophies in handling enemies it seems is that while Hubbard was decidedly in favor of attacking enemies of Scientology who attack the group, Raniere was was in favor of not only attacking those who attack Nxivm but to attack those who did not and were not going to attack Nxivm – but merely wanted to leave him quietly.
It caught up with old Vanguard and is perhaps the main reason why he is likely to die in prison and Nxivm not likely to survive him.
On the other hand, Hubbard has passed on and Scientology lives on.
While there is much similarity in their methods of attack, even if they don’t agree on provocation, there is a one big dissimilarity between Hubbard and Raniere.
In the words of one who was both a onetime Scientologist and also took a few Nxivm courses, here are some similarities between Scientology and Nxivm – and the One Big Difference.

By a Former Student of Both

“When I took the 16-day intensive of Nxivm, I enjoyed it. Even though I knew Keith had stolen things from Ron Hubbard, I absolutely loved what he did with it. I got a lot of good things out of it, Just like in Scientology, there was some really great, great things, basic profound truth and helpful things that really did help people. Yet the leader Raniere got corrupted and so maybe it’s absolute power which corrupts absolutely. I don’t know.

“Among the things I noticed that he took from Scientology were not only words like parasite and suppressive, but another word is ‘intensives’. When a Scientologist buys a block of hours of private counseling, they call that an intensive. Asking questions is also the method of counseling employed during Scientology ‘intensives.’  Nxivm uses that same word for almost the same thing.
” As for philosophical similarities, among many is the point about not being a victim. This is part of Ron Hubbard’s philosophy and he helps people with his counseling procedures to realize that there are no ultimate victims and that if you are a victim, you have a primary part in causing it to be brought upon yourself. Hubbard gets to people’s victimhood by finding out what they did to  ‘pull that in’.
“It’s just one more thing that Keith lifted from Scientology.
“’Counter survival’ and ‘pro survival’ are major concepts in Scientology. Ethics is the subject used to punish.   The more I study Keith, the more I see the majority, not all, but most all, is lifted from L. Ron Hubbard.  Whereas the methods of NLP and hypnotism are not what’s taught in Scientology, but that’s what is done to them.
“In the end, I realize that Keith Rainiere had not only taken up the technology of Ron Hubbard and used it to  further his own means of technology, but he also took up the litigation procedures that Ron Hubbard recommended and with Raniere some of them were even worse than Scientology which is hard to believe.
“However it would be nice if you differentiated one thing. Ron Hubbard was never in the slightest way accused of sexual misbehavior or misbehavior with minors and God knows he had thousands of minors around him for decades working directly with him and there was never even one accusation, nor were there accusations of extramarital affair’s and so on and so forth.
“So in that regard Keith Raniere and L. Ron Hubbard are very different.”

Perhaps, yet another difference is that Hubbard seems to have created his own material and Raniere seems to have stolen it from Hubbard.

[Editor’s Note to Raniere’s lawyers: Both of the last two photos are not authentic photos but were photoshopped by Frank Report.]

Click here to post a comment
Readers on Rick Ross, Nxivm money laundering, Raniere’s talent, suicide and using Anne Frank for Pea Onyu
Are We There Yet? – The Salzman Women Want A Road Trip