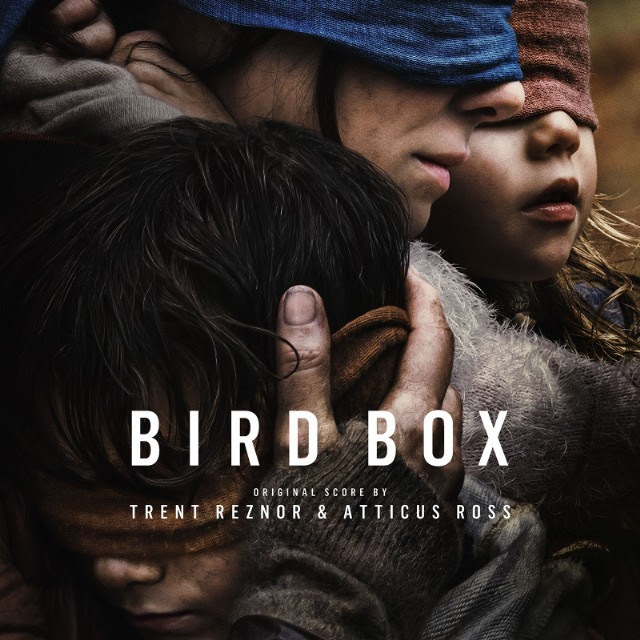 Rolling Stone praised the “haunting, hypnotic, palm-sweating score” composed by Trent Reznor and Atticus Ross for the Netflix film Bird Box. Now fans can purchase the score as a high-resolution digital download HERE and listen to it on streaming services HERE. Bird Box, which was directed by Academy Award®, Golden Globe Award and Emmy Award winner Susanne Bier and stars Academy Award® winner Sandra Bullock, has been viewed by more than 80 million Netflix accounts to date.
“Bird Box…employs an array of techniques to convey anxiety, impending danger, and the sense that safety and happiness are never guaranteed,” said Pitchfork. “…nearly a decade deep into a sideline in the soundtrack business that’s become a second full-time gig—and nearly three decades into Nine Inch Nails as a going concern—Reznor and Ross are finding new ways to draw their listeners in, then make them uncomfortable once they get there.”
In a note posted on NIN.COM, Trent Reznor said, “Like all soundtrack records we release, we aim for these to play like albums that take you on a journey and can exist as companion pieces to the films and as their own separate works. We created a significant amount of music and conceptual sound for Bird Box, a lot of which never made it to your ears in the final version of the film. We’ve decided to present you with this version of the soundtrack that represents what Bird Box is to us. We hope you enjoy. For those interested, we will be releasing a more expansive (read: more self-indulgent) physical-only offering this spring that will contain an additional hour of music and artwork that colors further outside the lines…Enter at your own risk!”
Reznor and Ross are scoring the Fox 2000 thriller The Woman in the Window. The film, helmed by Joe Wright, is based on the best-selling novel by A.J. Finn and will star Amy Adams, Gary Oldman and Julianne Moore. The pair has also been tapped to compose original music for “Watchmen,” Damon Lindelof’s episodic series for HBO, which is based on the original Watchmen graphic novel and film.
The two began working together as film composers on David Fincher’s The Social Network, earning an Oscar® and a Golden Globe® for the score. They have since worked on scores for The Girl with the Dragon Tattoo (winning a GRAMMY® for Best Score Soundtrack for Visual Media), Gone Girl, Patriots Day, among other projects.
Reznor has also won two GRAMMY® awards for his work with Nine Inch Nails, which wrapped up the massively successful COLD AND BLACK AND INFINITE NORTH AMERICA 2018 tour in December. NME praised the band’s 2018 album Bad Witch as “Nine Inch Nails’ best release in a decade.”
Track Listing – Bird Box (Abridged)
1.    OUTSIDE
2.    UNDERCURRENTS
3.    LOOKING FORWARDS AND BACKWARDS
4.    WHAT ISN’T ANYMORE
5.    SLEEP DEPRIVATION
6.    CAREFUL WHAT YOU WISH FOR
7.    A HIDDEN MOMENT
8.    AND IT KEEPS COMING
9.    CLOSE ENCOUNTERS
10. LAST THING LEFT