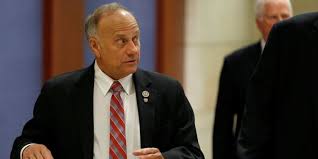 Iowa Congressman Steve King has been widely and rightly condemned for his recent remark questioning the offensiveness of “white supremacy”, “white nationalism”, and “Western Civilization”. From the context of his statement, and based on his strong denials, we can interpolate that King is not a white supremacist, nor did he intend to express support for white supremacism, but his wording in the fateful New York Times interview was nonetheless careless and, well, offensive.

The GOP is right, therefore, to distance itself from this sort of racist rhetoric – rhetoric that frankly flourishes on the Left, where it invariably involves the demonization of white people and attracts little media interest. The hypocrisy of Democrats and liberals notwithstanding, the Republican Party is a party that believes in equality under the law, human rights, respect, and non-racialism. Indeed, one of the chief problems with King’s statement was the fact that he grouped “white supremacy” and “Western Civilization” together. As an instructor in Western Civilization classes and as the author of a Western Civilization textbook, I know as well as anyone that Western Civ is not defined by white domination and racism; on the contrary, the true legacy of the West is our increasing acceptance of the dignity and rights of all people, regardless of race and other factors. King apparently needs to be reminded of this, and so the GOP should do its best to enlighten him.

Had Republicans in Congress merely lent their support to the motion to rebuke Rep. King for his offensive comments, they would have been in the right. Had the Republican National Committee or the Iowa Republican Party decided to expel King, that too would have been a legitimate, if extreme, course of action, consistent with the freedom of speech and freedom of association which Republicans have a right to exercise.

Unfortunately, Minority Leader Kevin McCarthy, who leads Republicans in the House of Representatives, decided to take a different approach. He stripped Steve King of his committee assignments – specifically, his positions on the House Judiciary Committee, the Agriculture Committee, and the Small Business Committee. I strongly disagree with this decision, just as I strongly disagree with King’s wrongheaded interpretation of Western values.

Late in 2018, House Republicans decided to deny two re-elected Republican members of Congress any committee assignments. These Congressmen were Chris Collins of New York and Duncan Hunter of California. The reason was that both men are under indictment for serious crimes. Now Kevin McCarthy has apparently decided to expand the list of reasons why a Republican Congressman can be kicked out of all committees. Steve King is to suffer the same fate – not because he committed a crime, not because he is accused of committing a crime, but simply because he said something that many people deem to be offensive.

This is a terrible precedent to set for the obvious reason: who shall decide in future which remarks are sufficiently offensive to merit similar punishment? McCarthy has set House Republicans on a slippery slope. Undoubtedly there will be more calls – mainly from the Left – to strip more Republicans, and perhaps eventually most or even all of them, of their committee assignments, or even to expel them from Congress, because of statements that certain people find objectionable. We must not forget that, for many leftists, every Republican and every Trump supporter is presumed to be a racist. McCarthy’s policy is thus not sustainable, and nor is it right, for two key reasons.

First, no American should be punished simply for stating his views, no matter how offensive they may be. The growing view, especially in academia, that offensive speech is something that must be suppressed, and that voices outside the (left-leaning) mainstream should be silenced, is not one to which Republicans should subscribe. Moreover, if they choose to placate the advocates of intolerance in one case, they will find that the demands for further concessions will be unending. One day, Republicans and conservatives could find themselves kneeling like supplicants at the high altar of political correctness, as Democrats already do, and that would be a tragedy and a national disgrace.

The second and even more important reason why Rep. King’s committee assignments should be restored is that service on such committees is a vital function of Congressional representatives. Whether you like Steve King or not, the people of northwestern Iowa elected and re-elected him to the United States Congress. They did so because they wanted him to represent them, not only in votes on the floor of the House, but in Congressional committees, where many of the most important decisions are made about the future of our country. Arguably, therefore, stripping King of his committee assignments punishes his constituents, who are guilty of no offense whatsoever, more effectively than it punishes King himself. This is a travesty and an abrogation of the basic principles of American democracy. Simply put, Steve King may or may not be a Republican in good standing, but he is a United States Congressman, and he should receive all the powers and perquisites attached to that high office.

Let us hope that Minority Leader McCarthy will reconsider his penchant for shunning those members of his caucus who embarrass the GOP. There are other, better ways to reproach and discipline a member of Congress than by expelling him or her from all committees.

When the House Republicans come to their senses, they should offer Reps. Collins, Hunter, and King committee assignments consonant with their experience and interests. After all, the democratic rights of the people who elected these representatives in the first place are on the line.