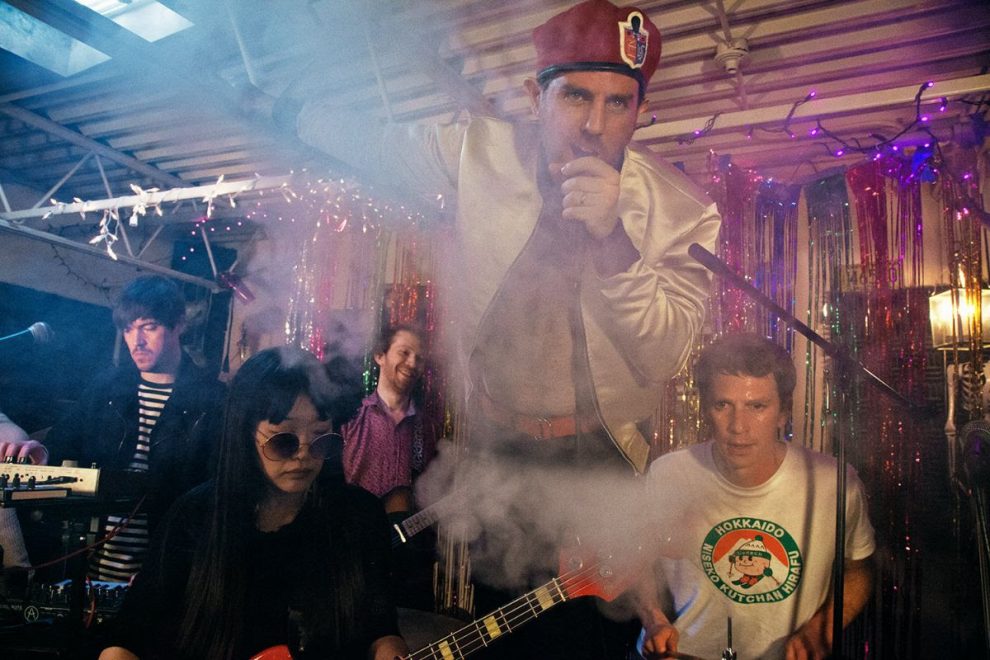 “‘Last Bus’ is one of those songs that feels like it could fall apart at any moment and it is in that tension that Lavie thrives. His dissonant vocals sputter out over crackling electronics, sharp guitars and lithe bass parts.”
– The 405
Northern Transmissions has shared Van Goose’s second single entitled “She’s No Pressure”. When talking about the track, Van Goose’s Shlomi Lavie says, “I read in the newspaper about a woman crashing her own funeral. Her husband hired hit men who ended up showing mercy and didn’t kill her. But they held a funeral anyway, as a setup for the husband. She just showed up and said “surprise! I’m still alive!”. True story. That really intrigued me and made me think of what drives a person to murder their partner.”

When Shlomi Lavie’s mother realized she had a hyperactive kid on her hands, she didn’t treat his ADHD tendencies with pills. She signed Lavie up for a marching band class at a community center. The only problem? Its music director thought the drummer “had no coordination whatsoever” and should play the trumpet instead.
The comment didn’t sting so much as stick, ensuring he’d spend the next couple decades trying to prove everyone wrong. And wrong they were, starting with Lavie’s studio and stage work alongside such acclaimed Israeli artists as Berry Sakharof, Arik Einstein, and Yehudit Ravitz. Not to mention random gigs like a loose recording session with Ryan Gosling and local musician/producer Rona Kenan.

Lavie also lent his steadfast rhythms to two successful albums by the heady band Habiluim. One of Israel’s most unlikely major label acts, they’re known for sneaking dark and subversive lyrics into a restless mix of punk rock, Balkan folk, and klezmer music. Kind of like a Trojan horse, subsisting on a steady diet of irony, rage, and Kurt Weill. That approach brought them as far as a Brooklyn recording studio, giving Lavie his first taste of the city he’d soon call home.

“I always felt like something was missing,” he explains, “like there’s a whole world inside my head about to explode. That’s when I started writing my own music.”

Lavie’s first Brooklyn project after leaving Habiluim was more like a manic theatre piece with an electro-punk soundtrack than a proper band. “I was playing a character—wearing face paint and screaming in a raspy, Tom Waits-y voice,” he explains. “We had people with gas masks handing onions to the crowd, dancers, and a rubber rat. It felt oddly safe.”

To break that cycle, Lavie pursued two entirely different paths: a permanent drummer position in the multi-platinum group Marcy Playground and a solo outlet called Van Goose. While his role in the former has been going strong since 2008, the latter didn’t wrap its debut record until the past year.

Habitual Eater is worth the wait, too, yet another left turn in a career built on complete 180s creatively. Echoing the early days of DFA, the propulsive no-wave and post-punk of 99 Records, and the iconic 12-inches of West End, songs like “Mike Myers,” “Right Wave” and “On My Hand” sound like they were beamed from an old-school disco in outer space. And then there’s “Last Bus,” a twitchy opening track featuring Liquid Liquid’s own Sal P on percussion and a lo-fi blend of lean bass lines, hollow cowbells, and steam-pressed synths.

As for the album’s surreal lyrics, let’s just say it’s no surprise is a big fan of brash directors like Jim Jarmusch and Jean-Luc Godard. Cross that with a childhood spent putting Ziggy Stardust and the Chariots of Fire soundtrack on the same pedestal as Pet Shop Boys and “Pump Up the Jam,” and, Van Goose has got something truly genre-less on its hands here.

Or as he puts it, “I never felt like I ‘belonged’ in a certain scene. I like to keep my options open and be exposed to everything.”