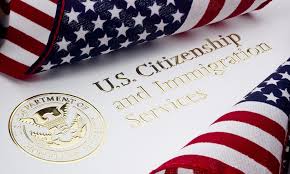 We have an immigration system that is broken not because, as open borders advocate, we need to provide amnesty, but because the immigration system undermines our values and allows individuals to abuse the rule of law. Consider this tragic report in our Corruption Chronicles blog.

While the U.S. government advances policies to prevent child marriage in foreign countries it approves thousands of petitions filed by Americans seeking spouse or fiancé visas for children born abroad. In the last decade more than 8,500 petitions for spousal entry into the U.S. involved minors, according to government figures included in a Senate Homeland Security report (How the U.S. Immigration System Encourages Child Marriages) released this month. In an overwhelming number of the cases girls were the younger party and in some there were “significant age differences,” Senate investigators found. Two were only 13 years old, 38 were 14 years old, 269 were 15 years old, and 1,768 were 16. The remaining 6,609 were 17 years old, according to the records, which were obtained from U.S. Citizenship and Immigration Services (USCIS).

In a disturbing example, the agency approved a 71-year-old American citizen’s visa request for a 17-year-old spouse from Guatemala. In another, the agency granted a 14-year-old U.S. citizen’s petition for a 48-year-old spouse from Jamaica. USCIS also rubber-stamped 149 applications involving a minor with an adult spouse or fiancé over the age of 40. Nearly 5,000 minors in the United States on spousal or fiancé visas received green cards to become lawful permanent residents, federal figures show. “U.S. law and U.S. Department of State policy aim to prevent and reduce the risks of child marriages occurring around the world, yet major loopholes in U.S. law have allowed thousands of minors to be subjected to child marriages,” the senate report states. “Under the Immigration and Nationality Act (“INA”), a U.S. child may petition for a visa for a spouse or fiancé living in another country, and a U.S. adult may petition for a visa for a minor spouse or fiancé living abroad.”

Two government agencies—USCIS and the State Department—must approve spouse or fiancé visas. The request is initially made to USCIS, which does not require parental or judicial consent for minors. Once the agency approves the application, the State Department usually issues the visa. “The State Department returns or rejects few spousal or fiancé immigrant visa petitions after they are approved by USCIS,” the report states. Senate investigators spoke with a “child marriage victim” who was forced to marry her older cousin during a family vacation to Pakistan. USCIS approved her spousal immigration benefit when she was just 13 years old and throughout the forced marriage, she suffered physical and sexual abuse. “She is just one of the thousands of U.S. women and girls forced into a child marriage involving the U.S. immigration system,” the report says.

Ironically, the U.S. government launched an aggressive global campaign years ago to slash an epidemic of child marriages, rampant in third-world countries. India tops the list for child marriage (15.5 million), according to a global nonprofit committed to ending it and enabling girls to fulfill their potential. Two Latin American countries—Brazil (3 million) and Mexico (1.4 million)—also appear in the top ten. As part of the U.S. campaign to reduce child marriage abroad, Congress passed a measure in 2013 requiring the secretary of state to establish and implement a multiyear strategy to “prevent child marriages” and “to promote the empowerment of girls at risk of child marriage in developing countries.” A few years later the State Department launched a Global Strategy to Empower Adolescent Girls to, among other things, “reduce the risk of child, early, and forced marriage (CEFM).” In its lengthy strategy handbook, the agency revealed that there are nearly 700 million women alive today who were married as children and 15 million more are married each year. The State Department also writes that “forced marriage is a human rights abuse and, in the case of minors, a form of child abuse.” It also creates gender inequality, contributes to economic hardship and leads to “under-investment in girls’ educational and healthcare needs.” Why would the same agency approve thousands of visas for children—mostly girls—to enter forced marriages in the U.S.?