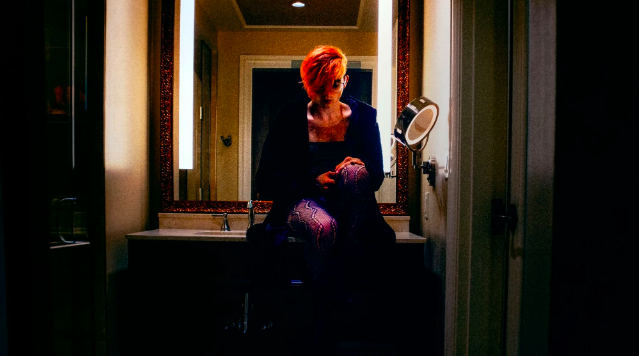 American Pleasure Club has announced their new LP Fucking Bliss as well as a new track “what kind of love?” on Noisey. The new LP will be out 3/29 via Run For Cover Records. They also will be touring with Thursday this spring. Dates are below.

When talking about the track American Pleasure Club’s Sam Ray says, “‘what kind of love?’ is a song about what Gabor Maté referred to as ‘the realm of hungry ghosts’. it’s a song about being a functioning drug addict, about suffering greatly this way but still existing, sort of – a halfway point between the living & dead – still physically present in this space but when you look at the eyes, there’s a kind of tumbling & falling down into a great abyss. however, it’s not a song about addiction itself – the drugs and that lifestyle, they’re irrelevant to it – instead it’s concerned with the sorts of decisions & sacrifices we make to spare the people we love – family, friends, etc – from the knowledge of & exposure to our own suffering, even if that’s sort of a zero sum game in the end. the emphasis is on ‘functioning’ – not ‘addict’. and going beyond addiction, it’s about the moral & ethical dilemma at the heart of that choice – ‘do we keep our pain from the ones we love for the sake of their happiness?’, versus ‘in hiding these fundamental truths about myself & how i feel, am i actually hurting the people i care most about?’ to be clear i don’t think there is an answer to that, even on a case-by-case basis, there might not be an answer. the song is not about trying to answer that, nor is it even trying to make any progress towards answering that question, because i don’t think you can, not properly or completely or satisfactorily – no, the song is the question. the question is the song. the title, “what kind of love?” is both rhetorical and literal, but there’s no answer.”

I recorded this album Fucking Bliss in May 2015. It took nine days; I was going through a horrifying, awful time in my life & without even having to think about it, I wrote this album in one long & seemingly unbroken burst of manic, paranoid energy. At that time, I thought I knew for certain that I’d be dead by the next time an album of mine was released, so I wanted to make sure I was making the right statement in that context. It’s dark, maybe, but I’ve always been resignedly fatalistic in that sense, a bleak pragmatist. There was another project finished, which we were colloquially calling Honeypot at the time, & we’d just gotten back the masters. It was a 26 song double record, over an hour long. The concept for it was a party, like a celebration, it was a celebratory record. It was an album made by a collection of friends, rather than a rock band. We had subtitled it The Big Joyous Celebration – this was not an album to be poured over following a death.

Edouard Levé, in his posthumous, final work Suicide, refers to the character’s death as “[a] tall black tree hides the forest that was your life”. This was how I thought of this record, while writing it. If my life – and my last works – were to be poured over & deconstructed this way, I wanted to make sure I considered what I was saying in them, then. Levé killed himself days after turning in his final manuscript, and while many of the specifics differ, the book was still turned over endlessly for ‘clues’, and consequently the ‘shadow of the tall black tree’ looms large now over his entire oeuvre.

Similarly, while I didn’t intend for this album to be explicitly detailed in terms of my life or mental state, it’s still without a doubt the most personal record I’ve ever made – the only other I consider an equal is an ambient album called Seeing little ghosts everywhere which was made during a similar sort of mental-breakdown, in 2011. Both records get at something very deeply, uncomfortably personal to me, even as one exists without lyrics at all & the other’s words are so deeply obscured in the music that their meaning remains frustratingly and intentionally elliptical. Still, both albums get closer than ever before to sounding and feeling the exact way that I felt at the time that I wrote them. Bliss remains frustrating for me to listen to because of how fully and completely it allows the listener to live inside my head at the time of writing – like the world’s bleakest ‘Being John Malkovich’ slash-fic.

I often say that album I’ve written is, in some way, a suicide-record. Not a note – just that I’ve made each record with the idea in mind while writing that I will die when it’s done. This isn’t an exercise in gross nihilism, so much as a way of ensuring every record I write strives to be the most perfect version of itself, and that I don’t waste my dwindling time on something I – or God forbid the listener – would consider inessential. It’s generally more of an exercise in making sure everything I release is as good as it could possibly be – but in this case, as stated before, it ended up – briefly – as something much more literal.

I haven’t kept track of how many suicide attempts I’ve made in my life. It would be impossible, I think, to do so properly. There are impulsive, desperate actions that accomplish only personal embarrassment; there are calculated, deliberate times where I am like a meteor falling & burning in the atmosphere but unable to strike the ground. I don’t know how to sort them. I’m not even sure how to delineate them, and I’m not sure how many more ways there are to categorize them – nor if it’s even healthy. I don’t think it’s something worth speaking about further. It’s also not worth speaking about the circumstances in my life that lead to me making this record. I will say only that it’s not something I’ve ever felt or experienced before or since, and I hope to never experience anything like it again.

It would be easy to say that this record took so long to be released because I had to work out so many complicated feelings about it – it’s certainly true that I have – but the truth is, as always, much more dull. We wanted to released it after Honeypot to announce our new band name, as this album was the first written as  American pleasure club – but things sort of drifted off & deflated. It felt too jarring, too intentionally abrasive, to do that. Because of that, ‘bliss’ fell to the side, and as time went by I came to love it very dearly – not just for what it represented personally, but just because I now think it’s a very wonderful record. It feels so genuine & strangely warm to me, in a way that I always want my music to be but am often afraid to fully embrace. It’s very true. It uses vocals in a way I always want to – manipulated, buried, obscured, affected, or horrifically mangled – to deconstruct basic pop music and convey something so personal and real, a state of mind, rather than a narrative, really. I could talk for hours about the inspirations behind it, the things it reminds me of, now, in hindsight, but that’s not the point. I can say though, with absolute confidence, that it’s without a doubt my favorite album I’ve made yet, and I don’t think I could have said that when I first finished it, let alone speak at length about it this way, so I’m very, very glad we waited as long as we did, and I’m likewise very glad that it’s going to be released now, finally, so you can hear it.