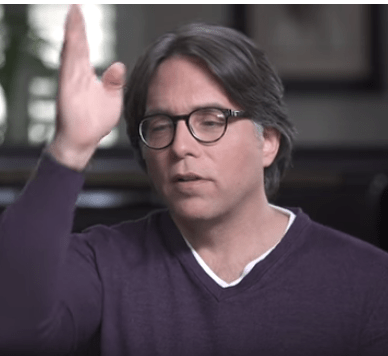 Keith Alan Raniere is the man who for years tortured people using the legal system.  He told people he’d see them in jail or dead.

According to Kristin Keeffe — Emiliano Salinas and Keith Raniere paid off a Mexican judge to falsely accuse and convict several women of crimes they didn’t do in Mexico. Upon entering Mexico, they’d be arrested, put in a Mexican prison, tortured until they were willing to confess to lying about Raniere and NXIVM – to stop the torture. After these confessions, they would be disposed of, never to be seen or heard from again. Luckily, they saw through the plot to get them into Mexico.

Now, Raniere has the nerve to be a crybaby about spending time at the MDC to await a fair and due process trial. His time, since his arrest in Mexico, is far less than any legal torture he’s put anyone through.

Raniere/NXIVM is well known for data dumping in order to complicate legal matters. All that data at Salzmans was most likely planned.

Raniere/NXIVM also liked to drag out legal cases. How long was NXIVM vs Ross? 14+ years.

Raniere/NXIVM likes to file motion after motion that slow down any legal process. Now he’s being a crybaby when the shoe is on the other foot.

Raniere/NXIVM like to gang lie in legal proceedings so the truth is harder to come out.

Hasn’t Clare Bronfman’s claiming attorney/client privileges with every attorney who ever worked with anyone of NXIVM’s legal battles, procedure, legal matters or retained – held up discovery?

Isn’t it she who is gonna pay the legal fees holding up discovery?

Now everyone wants their own separate trial. Those motions take time away from working on discovery.

How about Kathy Russell taking the 5th over 75 times in a two-hour time frame. Isn’t that holding up the truth? How many others have done that?

Keith Raniere sure doesn’t practice what he charged others so much to take.

Nothing in the external world can mess with your inner joy, Crybaby Jane.

How about going to your happy place? Maybe it’s all just bullshit or you’re not evolved enough to apply your own training.

Click here to post a comment
Shadow: What is Kathy Russell hiding about Allison Mack and DOS?
One Night in Bangkok: Kathy Russell will gladly serve three years in prison for NXIVM