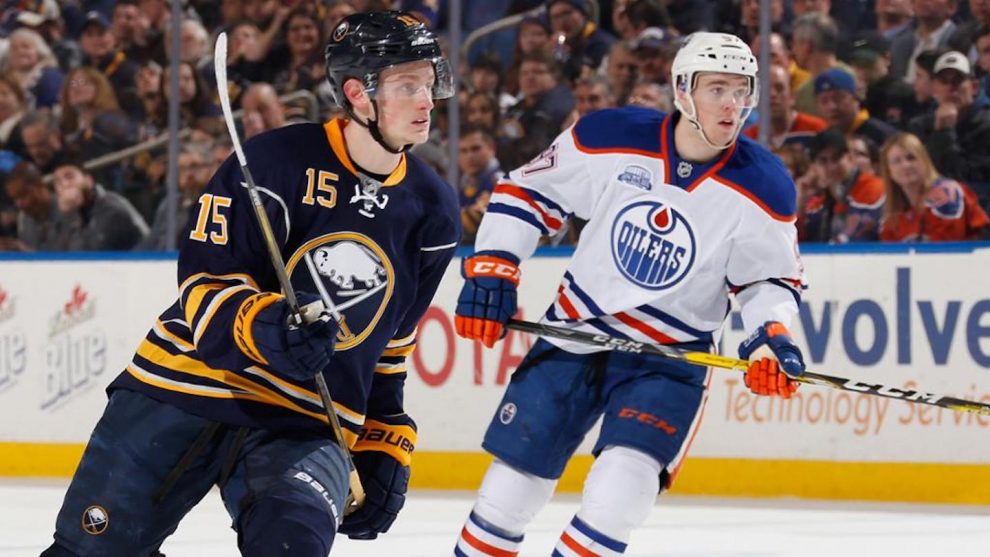 The Edmonton Oilers and their generational player, Connor McDavid, have been in the news of late, and the headlines all have their genesis on that fateful day in late April, 2015.

The Buffalo Sabres waited with breathless anticipation and Draft Lottery day approached. The team had spent the last two seasons playing unwatchable and disastrous hockey, with one prize in mind.

The winner of the lottery would get the opportunity to pick first and land McDavid. Then Sabres General Manager Tim Murray was so focused and so fixated on that outcome, that the team even hosted an OHL game at KeyBank Center featuring McDavid in action earlier that season.

And then Lottery Day, and all eyes were on the bouncing balls, the algorithms to select that winner. When NHL deputy commissioner Bill Daly flipped that card over, it was Edmonton. The winner. Again.

Hearts sank all across Western New York. The Sabres would have to “settle” for Jack Eichel. The “other” top level, advertised as generational player.

Rumor had it that Murray quietly reached out to new Edmonton General Manager Peter Chiarelli to see if anything could be done via trade to swap picks. That went nowhere.

So fast forward to 2019, and even though the Oilers finally stopped their non playoff skid, for one season in 2017, today they are a mess.

First blunder… trading Taylor Hall for Adam Larsson. Hall was a one-time overall first pick by the Oilers, who had a run of good luck winning draft lotteries over the past decades. Those blue chip draft picks have not translated into success.

Second blunder… losing Jordan Eberle, and getting nothing in return.

They then brought on Milan Lucic and his bloated $6 million a year contract, a player past his prime and that nobody wants. And added marginal players such as Tobias Rider and Ryan Spooner. Spooner was placed on waivers Monday.

They are saddled with goaltenders Mikko Koskinen and Cam Talbot at boxcar salaries.

The franchise is in salary cap hell. Beyond McDavid, the team is rudderless and scratching for talent and leadership. And their fan base is getting restless and jumping off the bandwagon in droves.

For the Sabres, it is a different story.

Like the Oilers, they too changed general managers, bringing in Jason Botterill to try and clean up Murray’s mess. Botterill has made some bold moves, pretty much cleaning house while trying to keep the pieces of his core leadership.

So basically, much was made of the Sabres collapse in Edmonton just two weeks ago, getting trounced by a 7-2 score. The Sabres had more shots, more scoring chances and seemed to control the edge in play, but incredibly stupid playmaking and the lack of tight checking resulted in a disastrous finish for the team.

The teams will have a rematch on March 4 at KeyBank Center, the one time each year that the Oilers come to town. And once again, all eyes will be on the McDavid vs Eichel matchup.

That dynamic was on full view at last week’s All Star Game. Particularly, at the skills competition the night before, where both players participated in the fastest skater competition.

Eichel was the second last skater to perform, and logged a 13.582 seconds result to take the lead.

Enter McDavid, who had won this competition the previous two years. He skated last, and bested Eichel by a hair of .204 seconds.

So moving forward, you have two teams, building around their generational players, and coming out of the All Star break, both within striking distance of a playoff spot. The Sabres sit in 9th place, four points out of the playoffs, while the Oilers are three points out, sitting in 13th amongst a crowd of pretenders.

The Sabres, however, are much better positioned for success in the short term and the long term.

To begin with, they hold the rights to three first round draft picks this year, one being conditional and could be moved to 2020. Botterill could use any of those picks to bring in help now for a push to the playoffs. Edmonton CEO and interim general manager Bob Nicholson has little similar flexibility.

The Sabers have much more wiggle room and flexibility with the salary cap than does Edmonton, who in addition to their top paid goalies, have three centers commanding top dollar (McDavid, Leon Draisatl and Ryan Nugent-Hopkins), while being weak at other positions.

The Sabres are not without their own problems. Scoring beyond the top line is a concern. Kyle Okposo is emerging as the latest incarnation of Ville Leino or Matt Moulson, contract heavy and non performing. And the Sabres right now are stuck with him for three more seasons.

By March 4, when these two teams meet again, lots of the direction for these two parallel franchises will be set into motion. The NHL trade deadline will have come and gone. The league will be into its last month and the race will be on for those coveted last playoff spots. And McDavid vs Eichel is always great to watch, these two players who will always be linked to each other via fate and destiny.

Edmonton or Buffalo? Where would you rather be right about now?

Don’t look now, but the NWHL Buffalo Beauts have won four games in a row, all played at HarborCenter, since the team made a shakeup at coach and general manager. The team has one home game remaining, that being on Saturday, February 23 at 5pm against the Metropolitan Riveters.

The strange tale of Patrick Berglund, former Sabre who abruptly quit the team in mid-December and headed home to Sweden was clarified this past month when he gave an interview to a Swedish media outlet. Berglund said he lost his passion for the game. “I just knew I had to go home to find myself again,” he said. He emphasized that he was happy giving up the remaining money in his contract just “to feel good inside”. The forfeited amount was roughly $13,475,000.

Roger Stone, a victim of politicized prosecution
Answers to Your 24 Questions about HiCaliber and Michelle Knuttila