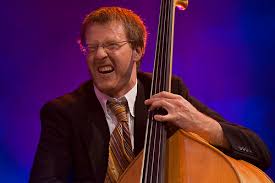 azz Band/Rock Band/Dance Band out February 15, 2019 via Hot Cup Records
2017 and 2018 DownBeat Critics’ Poll
Rising Star Composer, Rising Star Bassist, and Rising Star Arranger
“Šconsistently demanding, but also dependably involving, much like Elliott’s musical career thus far writ large.”  – Derek Taylor, Dusted
“But it takes a talent that you are either born with [or work for] to rise to the top; to express the emotion of the instrument, to let it take over your soul, to immerse yourself in its infinite universe with unbridled virtuosity.  The bassist Moppa Elliott has this in spades.” – Raul da Gama, Jazz Global Media
Album Release Concert on Friday, February 15 at Shapeshifter Lab
Hot Cup Records is proud to present Jazz Band/Rock Band/Dance Band, the triple-album release by bassist/composer/arranger Moppa Elliott. Featuring three drastically contrasting ensembles, this project displays Elliott’s talents as a composer, bandleader, and artist who is willing to constantly challenge his audience – and himself.
The bands featured on these albums include jazz band Advancing on a Wild Pitch (Elliott, Sam Kulik, Charles Evans, Danny Fox, Christian Coleman), rock band Unspeakable Garbage (Elliott, Jon Irabagon, Nick Millevoi, Ron Stabinsky, Dan Monaghan), and dance bandAcceleration Due to Gravity (Elliott, George Burton, Mike Pride, Nate Wooley, Dave Taylor, Matt Nelson, Bryan Murray, Dr. Kyle Saulnier, Ava Mendoza).  Each of these ensembles presents a different side of Elliott’s musical personality and diverse array of influences which have lurked beneath the surface of his work with MOPDtK, but are given full voice on these recordings.  All of the music is united both through Elliott’s foundational bass playing and his penchant for manipulating and subverting traditional song forms, melodies, and harmonies.
Each composition or arrangement is named after a town in Pennsylvania, as has been the case with Elliott’s titles since 2004, and each band is named after the theme around which it was built.  Elliott’s previous release as a leader was 2016’s solo double-bass album Still, Up in the Air.  He founded the label Hot Cup Records in 2001, has led the ensemble “Mostly Other People Do the Killing” since he created it in 2003, and has taught choir, orchestra, music theory, and music history to high school students in the greater NY area since 2004.
On these three recordings, Elliott explores aspects of his musical personality that have not yet been fully documented.  Having grown up in a household where Cecil Taylor, Miles Davis, John Coltrane, Igor Stravinsky, and Steve Reich were all in heavy rotation on the family turntable, Elliott developed an interest in many styles of music, encountering rock and roll through the popular culture of his childhood, and hip-hop while a student at the Oberlin Conservatory.  In addition to the music presented on these recordings, Elliott performs new music with the “Relache Ensemble” in Philadelphia, serves as principal bassist of the Litha Symphony in Chelsea, NYC, and continues to lead the jazz ensemble “Mostly Other People Do the Killing.”

Advancing on a Wild Pitch is comprised of musicians who all resided in Astoria, Queens (pianist Danny Fox has foolishly relocated to Brooklyn) and are avid baseball fans.  The five members have known each other since the mid-2000s, but the quintet was formed in 2016 to explore some of Elliott’s compositions from MOPDtK in another context.  Rather than disassembling Elliott’s tunes in the manner of MOPDtK, AWP approaches the compositions from the perspective of the classic jazz era of the early 1960s.  Some of the tunes are reimagined versions of pages from the MOPDtK book, while others, such as “Slab” never fit the aesthetic of Elliott’s earlier ensembles.

Unspeakable Garbage allows Elliott and his jazz-trained bandmates to explore the sound world and musical vocabulary of 1980s rock and roll, a style that all the members love dearly and has had a profound influence on their musicianship. In the early 2000s, Jon Irabagon briefly led a band called “Starship’s Journey: A Tribute to the Music of the 80s” in which the ensemble would perform cover versions of pop tunes and play all of the instrumental solos in unison.  Elliott composed the music for this band in the aftermath of a difficult breakup, and the cathartic nature of the music is plain to hear.  UG performs “instrumental van Halen” or “Def Leppard with no singing” or “Aerosmith with more chords” or “Pat Benatar singing a TV sitcom theme.”

Acceleration Due to Gravity is the result of the 18-year friendship between pianist George Burton and Moppa Elliott.  The two met at the Pennsylvania Governor’s School for the Arts, a sadly defunct state-funded arts program that they both attended and subsequently taught at.  Given their differences in approach, Elliott formed ADtG to be the type of ensemble in which they could both thrive, and the influence of drummer Mike Pride, a longtime collaborator, contributed to the aesthetic.

The music is based on Elliott’s idea of “dance music” in its many modern forms.  From jump blues to hip-hop, American dance music has revolved around grooves and their myriad possibilities.  Each composition is based on a musical cycle or loop that never repeats itself, exactly.  The model for these compositions was modern hip-hop, R&B, and dance music production in which the music relies heavily on “loops.”  Rather than repeat the same rhythms or musical elements exactly, they change subtly very often. The soloists take turns offering ‘verses” or “bars” and there is deliberately little material that could be considered a primary melody, “head,” or “hook.”