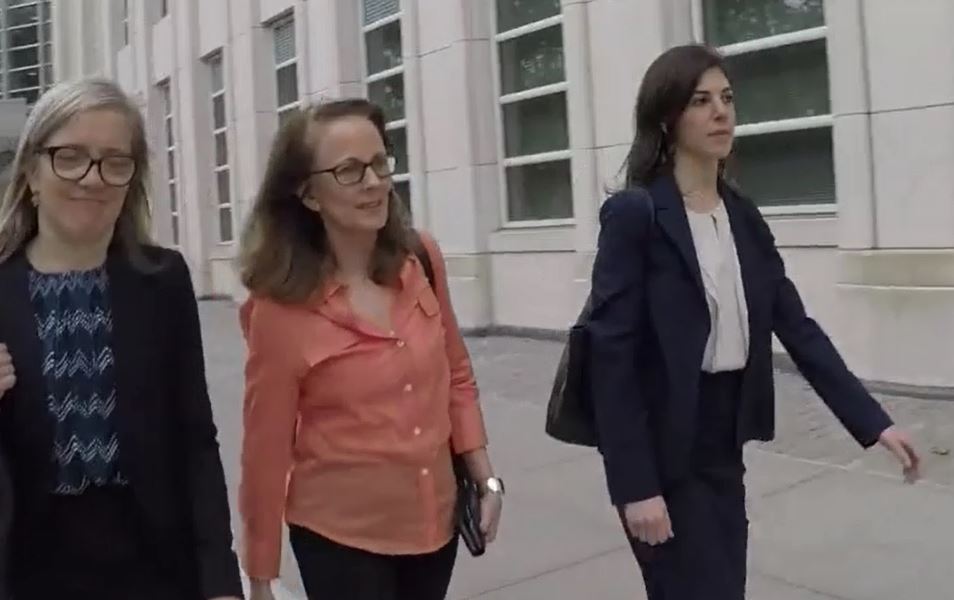 She may be guilty as sin, but Kathy Russell wants Judge Nicholas Garaufis to dismiss her indictment because the prosecution tricked her, she says, in the grand jury chambers.

Her Bronfman-paid attorneys, Justine A. Harris and Amanda Ravich, filed a memorandum of law in support of Russell’s motion to dismiss.  They accuse the government of prosecutorial misconduct.

The filing is nearly 4,000 words, with a table of contents and numerous case law cited. If this didn’t cost at least $25,000 of Bronfman’s dwindling trust fund, I’d be surprised.

They say the government set up poor Kathy [who had been set up years ago by Keith Raniere] to take the fall.

“[T]he government’s conduct and statements at the time of Ms. Russell’s grand jury testimony,” they write, “… wrongly communicated that it viewed her as nothing more than a ‘witness,’ when it was clear from the government’s questioning that she was at minimum a ‘subject’ and likely a ‘target.’”

At this point, it might be well to define these words – as it relates to federal prosecutions.

Witness: A witness in a federal criminal case is someone the Feds believe has information that might be relevant in a criminal investigation to help prove the guilt of other individuals.  As any novice criminal defense attorney knows, if you testify in a federal grand jury – as Kathy did – her testimony is not protected without a proffer agreement. A witness can shift quickly to become a subject or target -as did Kathy.

A proffer is a written agreement between federal prosecutors and an individual which permit the individual to tell the government about her knowledge of crimes, with the supposed assurance that her words will not be used against her in any later proceedings.

Subject:  The DOJ Handbook, defines a “subject” as “a person whose conduct is within the scope of a Grand Jury’s investigation.”  A subject lies between a target and witness. In general, the prosecutor isn’t certain that a crime has been committed, but wants to do more investigating to be sure.

Target: is a person who the prosecutor has evidence linking her to the commission of a crime.

As any beginning criminal lawyer knows, these three categories are ultimately meaningless; anyone can shift from one to another at any time. None of them offer protection because, even if you’re a witness or subject, there’s no guarantee your status will remain unchanged and you won’t become a target – and if you become a target – nine times out of 10 you will be indicted.

Everyone knows the rules who are in federal criminal practice. But Kathy Russell’s Bronfman-paid attorney, William Fanciullo, a former prosecutor himself, led her straight to the grand jury chambers  – armed only with a sheet of paper wherein it was written out for her – the 5th Amendment invocation against self incrimination.

Kathy might have been better represented, perhaps by an attorney not paid by Bronfman money.

Fanciullo might have tried to get a proffer for Kathy. [One was offered to Kathy shortly after her testimony but was declined by Kathy.]

At least Fanciullo should have met with the prosecution before Kathy testified – which he did not.  He chose instead to send her in – without meeting with prosecutors first – giving her a sheet of paper to read off her 5th Amendment invocation.

Kathy’s natural stupidity did the rest.

Rather than admit that Kathy’s Bronfman-fed attorney led her to the wolves, [or she led herself there] her new attorneys [also Bronfman paid – at least for now – though the trust is running low on cash] blame the government and want her charges dismissed, arguing that “The government’s conduct and statements … were likely designed to induce – Ms. Russell to partially waive her Fifth Amendment rights and provide incriminating testimony to the grand jury that indicted her a mere ten weeks later.”

Their argument is in essence that hapless fall girl Kathy Russell is a victim of the prosecution – not her own stupidity, cupidity, and the manipulation of Bronfman-Salzman-Raniere over nearly two decades.

But is the government to blame?

Kathy’s experienced [Bronfman-paid] counsel should have known and prepared Kathy for the “possibility” that she was a “subject” or “target”.

Did Fanciullo know that Kathy was a likely target and not tell Kathy – because he was supposed to protect the people who were actually paying him – Bronfman-Raniere?

Did Kathy, by invoking the 5th some 75 times, prevent the government from finding out about other Bronfman-Raniere crimes? If she had been forthright witness would she have avoided an indictment for herself but have given evidence of numerous other crimes committed by Bronfman-Raniere which the government would have charged them with?

Did she sink her own ship by refusing to testify honestly and in a forthright manner?

Did she take the fall?

In a previous filing, the prosecution raised the question of potential conflict of the Bronfman-paid attorneys representing defendants in the case. They described circumstances concerning another woman, one far smarter than Kathy, who was issued a subpoena requiring her to appear before the grand jury in the Nxivm case.

Here is what happened to her:

On the other hand, Kathy chose to stick with Bronfman -Raniere. She went with Fanciullo, who declined to meet or speak on the phone with prosecutors before leading Kathy to the grand jury

Why didn’t Fanciullo try to find out, with a simple phone call or meeting – which the prosecution told him by email they were available to do – if Kathy was safe or if he could arrange for her immunity in return for cooperation?

Was it her idea or his [or Bronfman’s] not to cooperate?

Fanciullo told her to plead the 5th. Kathy went in there, likely knowing she committed crimes – plenty of them – as she knew also that Keith and Clare committed crimes. She had with her, her little 5th Amendment sheet ready and pulled it out some 75 times.

I can imagine the spectacle of foolish Kathy repeatedly pulling out the sheet with one or two sentences on it [“I refuse to answer on the grounds that it might tend to incriminate me” etc.].

Did she really need to read from a sheet? Could she not memorize it?

I can imagine her answering some questions stupidly, some evasively, some dishonestly, and again and again pulling out her little paper and reading, ‘I refuse to answer…”, etc..

It must have made quite an impression on the jury.

If she was not a target – she likely made herself into one with her stunningly stupid performance.

She acted guilty – as indeed she was.

Of course, it may be true that the government did in fact have evidence that made her chargeable with a crime even before Russell walked into the grand jury.  Perhaps believing Kathy was going to testify honestly they had no intention at the time of charging her.

But I would almost bet the farm Kathy did not testify honestly [She is after all a Nxivm member].

Like Raniere she alternates between ethical lying, telling ethical half truths, truths and in her case in the grand jury taking the 5th.

Possibly at all the wrong times.

In her jumbled up head – she might have been thinking she was safe – her main goal was to protect, lie, scheme and perjure herself to help Bronfman-Raniere.

Which may have been her attorney’s goal as well.

The government claims that at the time of Russell’s grand jury testimony, she was “not a ‘putative’ defendant in the judgment of the government” and it did “not yet have evidence to establish [Ms. Russell’s] participation in racketeering conspiracy.”

The government says during the 10-week period between Russell’s grand jury testimony and her indictment, Russell shifted from witness to target based on evidence they developed in their ongoing investigation.

It may be true that Russell’s bizarre and evasive performance in the grand jury prompted the government to look for some of that evidence.

That does not mean the government used statements she made – under some false sense of security – when she did not invoke her 5th Amendment rights – as evidence against her. In fact the government says it will not use anything she said in the grand jury against her.

But Kathy’s lawyers argue that that does not matter because Kathy might have provided answers to  questions that “furnished a link in the chain of evidence” needed to prosecute Kathy for her alleged federal crimes.  If Kathy had been told she was a target, she might have chosen to plead the 5th to every question.

The prosecutor advised Russell – that since she was a witness – when she could and could not assert her Fifth Amendment rights.  That does not mean Kathy followed that advice.

Kathy was free to step out of the grand jury chambers at any time and consult with her attorney. Every time Kathy invoked the 5th, the prosecution said it honored her privilege. She invoked it 75 times, leading me to suspect that Kathy, instead of being a witness, as the prosecution expected, went in there and persuaded them she was guilty as sin.

Kathy chose not to cooperate. It may have been the fault of her counsel. Or her own plan to take the fall – long ago programmed into her by Raniere.

She might have been told that, at worst, she faces a few years in prison – after which she will be well taken care of.  If she stays loyal to Raniere, when she gets out she will once again keep the double set of books for Nxivm, hide cash for Keith and Nancy, be permitted to clean the sheets and hot tub in Keith’s sex lair, and resume her ballet lessons in preparation for her debut at the American Ballet Theater at the Metropolitan Opera House.

On China, the Trump Adlministration and the US Public Stand Apart by Mel Gurtov
New York’s War on Religious Education