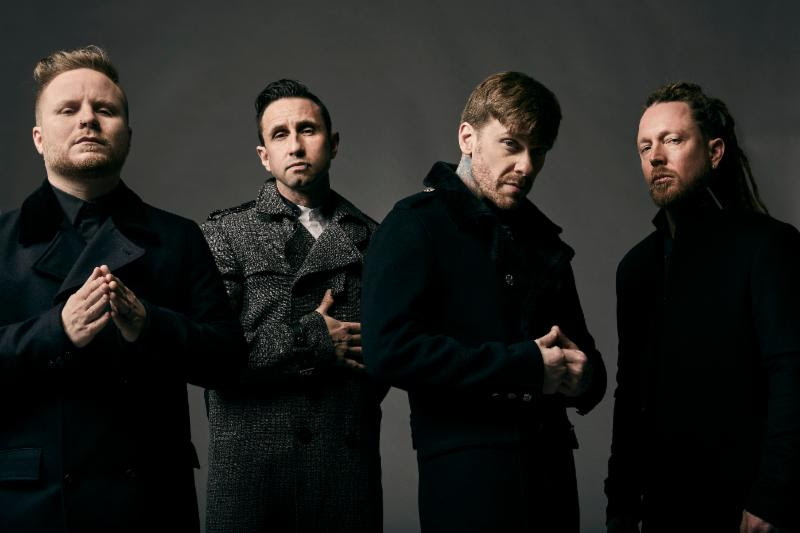 “At it’s core, ‘GET UP’ deals with empathy. Smith’s lyrics reflect a shared experience…pain can be a universal human experience and that sense of unconditional support and solidarity is the driving factor behind the song…” – Salon
“Emotional and personal…cinematic and nuanced…’GET UP’ which began as a song written for a friend and bandmate, is now bringing its inspiring message to millions of listeners.” – HuffPost
“…[ATTENTION ATTENTION is] a deeply confessional brilliant piece of work…most rock bands don’t possess what Shinedown does – unfathomable talent, an unwavering fan base and unbridled tenacity.” – Buzzfeed
“Shinedown have a knack for crafting rock anthems…” – Consequence of Sound
“…conviction, authenticity, and real life intensity. Brent Smith and Shinedown are familiar purveyors of all those artistic qualities.” – No Depression
Multi-platinum rock band Shinedown has announced new summer tour dates on their 2019 ATTENTION ATTENTION World Tour, beginning June 21 through July 27. Badflower, Dinosaur Pile-Up, and Broken Hands will support Shinedownon these coast-to-coast dates produced by Live Nation.
Fan club presale begins February 5 at 10am local time. Citi is the official presale credit card for the tour. As such, Citi cardmembers will have access to purchase presale tickets beginning Tuesday, February 5 at 10 a.m. local time until Thursday, February 7 at 10 p.m.local time through Citi’s Private Pass program.
Shinedown’s ATTENTION ATTENTION World Tour kicks off February 20 in Estero, FL atHertz Arena, which will see the band pack arenas backed by their biggest, most eye-popping production yet. Papa Roach and Asking Alexandria open. Amidst the tour, Shinedown will kick off a more intimate, limited run of shows in May entitled ‘An Evening With Shinedown,‘offering fans an exclusive, up-close-and-personal live experience. These special shows, inspired by the high demand for tickets to Shinedown’s three intimate, year-end shows at the House of Blues in Orlando, begin May 6 in New Orleans at The Fillmore and will include back-to-back nights in Atlanta, Myrtle Beach, and Nashville. Additionally, Shinedown will return to their roots in Jacksonville, FL for an epic set at Welcome to Rockville on May 4, and will headlineWNOR Lunatic Luau 2019 on May 17 in Virginia Beach, VA, MMRBQ on May 18 in Camden, NJ, Rocklahoma on May 24 in Pryor, OK, Inkarceration Festival on July 12 in Mansfield, OH, andRiff Fest on July 13 in Detroit, MI.
The uplifting #1 Active Rock and Top 25 Alternative hit, which was heard during the Super Bowl Pregame show, has amassed more than 27 million total streams,galvanizing listeners around the globe with its offer of hope, empathy and encouragement in the face of personal struggles, whatever they may be. Garnering praise fromthe likes of Huffington Post, Salon, Rolling Stone, Consequence of Sound, Buzzfeed, Parade, Grammy.com, No Depression and more with key playlisting on Spotify and Apple Music, the powerful song speaks to the human spirit in a time of need, something that front man Brent Smith is deeply connected to after battling his own personal demons. “GET UP” became a light in the darkness, born out of Brent watching his friend, Shinedown bassist Eric Bass, deal with clinical depression. When Brent put pen to paper, a beautiful, universal song rooted in Brent and Eric’s raw vulnerability took shape. Reaching far beyond any genre or label, “GET UP”quickly began resonating, soundtracking TODAY‘s look back at 2018, breaking a new record for Shinedown by giving the band the most Rock Airplay Top 10s ever and their 13th #1 on Billboard’s Mainstream Rock Songs Chart (the second most in the history of the chart, tied with Van Halen), and becoming a fan favorite at arena shows on tour where the crowd response is palpable.
Additionally, Shinedown has been nominated for two iHeart Radio Music Awards includingRock Song of the Year for #1 Active Rock hit “DEVIL” and Rock Artist of the Year.
Shinedown’s chart-topping album ATTENTION ATTENTION, out now via Atlantic Records, simultaneously hit #1 on Billboard’s Alternative, Top Rock and Hard Rock Albums Charts and debuted Top 5 on the Billboard 200. The story that unfolds as the album progresses is a poignant and enduring statement about humanity, touching on topics such as overcoming struggles, mental health, not being afraid to fail and the resolve of the human spirit as seen on tracks like “DEVIL,” and the anthemic “THE HUMAN RADIO”. Given the deeply personal nature of the record, Shinedown went in-house for production for the first time ever, enlisting bassist Eric Bass to produce and mix the album in its entirety.
Shinedown – Brent Smith [vocals], Zach Myers [guitar], Eric Bass [bass, production], and Barry Kerch [drums] – has sold more than 10 million albums and 10 million singles worldwide, has 11 platinum and gold singles and four platinum and gold albums, and 14 #1 active rock hits, and more than 1.5 billion total overall streams to date. Each of Shinedown’s 24 charting singles on Billboard’s Mainstream Rock Songs Chart has reached the top five – an unparalleled feat.