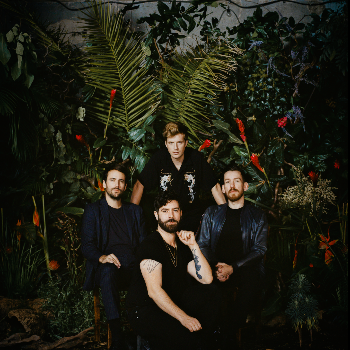 Today, Foals confirm support from Bear Hands, Preoccupations, Omni And Kiev on their twenty-date headlining US tour in support of their forthcoming album Everything Not Saved Will Be Lost – Part 1. Bear Hands will provide direct support, with Kiev opening, on the first leg of the tour in cities including Portland, Seattle, Los Angeles, and Las Vegas. Preoccupations will provide direct support, with Omni opening, on the second leg in cities including Brooklyn, Washington D.C., Boston, and Philadelphia (full details below).

Due to high demand, Foals recently added a third NYC show at Brooklyn Steel on April 12, and a second Washington D.C. show at 9:30 Club on April 18. The initial Brooklyn Steel and 9:30 Club dates sold out in under 24 hours, and the band has also sold out their show in San Diego. Tickets for the third Brooklyn Steel show are on sale now, and tickets for the second 9:30 Club show will go on sale on Friday, Feb. 8 at 10am ET. All other shows on the band’s 20-date North American headlining tour are on sale now here. The band will also perform a headline tour throughout the UK and Europe, and have sold out shows in cities including London, Paris, Amsterdam, Berlin, and Glasgow (full dates below). Twickets is the official ticket resale partner of the tour. To combat touts, resale is restricted to no more than face value. Buying or selling tickets on any other resale platform is strictly prohibited. Learn more here. The band has previously confirmed festival dates throughout North America including Mexico’s Vive Latino 2019 and Atlanta’s Shaky Knees Festival.

Foals have announced that they will return with two new albums in 2019:  Everything Not Saved Will Be Lost – Part 1 & 2, a pair of releases, separate but related, they share a title, themes and artwork. ‘Part 1’will be released on March 8th, with ‘Part 2’ following in the Autumn. From playing chaotic house parties in their home city of Oxford to becoming major festival headliners across Europe, Foals’ trajectory has been remarkable. They’ve earned critical acclaim (NME and Q Award wins, plus Mercury Prize, IvorNovello and BRIT Award nominations) and fan devotion (1.7 million sales of their four Gold-certified albums, plus over half a billion streams at Spotify since 2015) in equal measure. Everything Not Saved Will Be Lost – Part 1 is now available to pre-order here, with lead single, “Exits,” provided as an instant download.

The band have also shared the music video for Everything Not Saved Will Be Lost – Part 1’s lead track, “Exits,” which was directed by Albert Moya, features actors Isaac Hempstead-Wright and Christa Théret, and was produced by CANADA. Watch it here.

Profoundly tethered but possessing their own personalities, the two forthcoming albums capture the most compelling, ambitious and cohesive creations that Foals – completed by Jimmy Smith (guitar), JackBevan (drums) and Edwin Congreave (keys) – have ever produced. “They’re two halves of the same locket,” frontman Yannis Philippakis explains. “They can be listened to and appreciated individually, but fundamentally, they are companion pieces.”

Eager to break the traditional pop song structure which they felt they were becoming increasingly tapered to, the 20 tracks defy expectation. There are exploratory, progressive-tinged tracks which occasionally break the 10-minute mark alongside atmospheric segues which make the music an experience rather than a mere collection of songs.  Yet the band’s renowned ability to wield relentless grooves with striking power also reaches new heights.