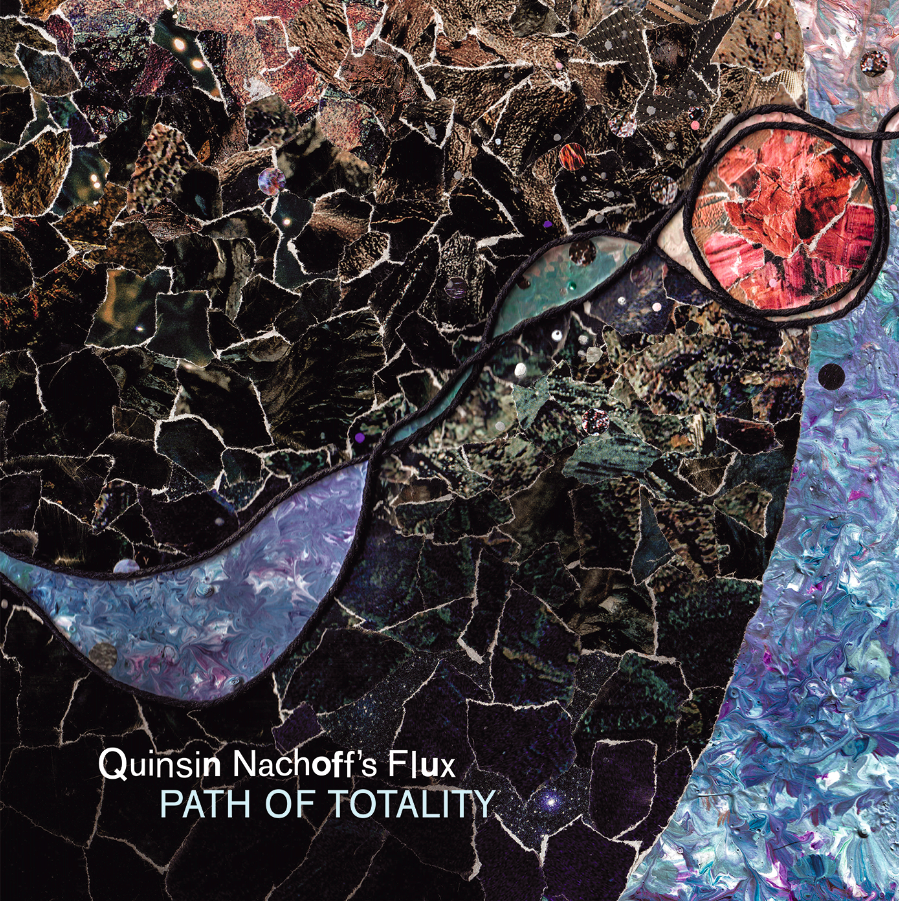 Saxophonist/Composer Quinsin Nachoff Traces the Shadow of the Sun on the Second Release by his Innovative, Genre-Eclipsing Band Flux

Neither Toronto nor New York, the two cities that Quinsin Nachoff calls home, offered prime viewing conditions as the moon eclipsed the sun in August of 2017. But Nachoff, who has long drawn inspiration from the scientific wonders of the universe, couldn’t help but be moved by this rare astronomical phenomenon – and to find a degree of solace in it. After all, here was a shadow large enough to blot out the face of the sun, darkening the Earth and then moving on. In the Path of Totality could be found hope that this, too – whatever “this” might be in the moment, whether political, personal or environmental – will indeed pass.

That faith in change is at the heart of Flux, the name that Nachoff has bestowed upon his remarkable group, which returns on February 8, 2019 with its second release, Path of Totality, via Whirlwind Recordings. Flux is an ensemble, and Nachoff a composer, that thrive in the spaces in between genres, styles and inspirations. At its foundation Flux is a quartet, though at times on this album a quintet and sometimes more, employing a vast array of instruments and a vivid palette of musical colors to create something that is consistently surprising as its shape morphs from moment to moment over the course of these six epic-length pieces.

In saxophonist David Binney, Nachoff has a frontline partner with a keen-edged tone and a refined ear for texture, having integrated electronics into his own work as an artist and a producer that expand and mutate his sonic environments. Matt Mitchell is a rigorous boundary pusher, a pianist and composer who astutely avoids obvious choices in favor of pressing fervidly into the unexplored. Kenny Wollesen couples a similarly adventurous instinct with a passion for the playful, as reflected not only in the eccentric arsenal of invented instruments known as “Wollesonics” but in the buoyant swing he maintains even in his most complex and abstract rhythmic excursions. The new addition this time out is Nate Wood, who alternates and at times shares the drum chair with Wollesen, lending the band an urgency and avant-rock propulsion familiar from his work with Kneebody.

While that combination of voices would offer a wealth of possibility for any composer, Nachoff was handed an even larger palette by Canada’s National Music Centre, a non-profit organization dedicated to promoting Canadian music through exhibitions, performances and educational programs. As one of the NMC’s first Artists-in-Residence, Nachoff was granted access to the Centre’s extensive keyboard collection, an enormous resource of both acoustic and electronic instruments.

“They really want this to be a living collection,” Nachoff says. “So I spent three weeks at the NMC exploring the keyboards and synthesizers in their new, state-of-the-art building, then another two weeks writing during an artists’ residency in Banff.”

Raised in a household where electronic music was not only heard but composed, Nachoff has long been spurred to follow his own, more acoustic path, but the NMC’s collection proved too tempting to resist. Both Mitchell and producer David Travers-Smith have a field day with the array of instruments, particularly on the stunningly pointillistic “Splatter,” recorded at the NMC. Beginning with Mitchell’s Baroque-by-way-of-Sun-Ra solo harpsichord improvisation, the tune progresses through a cosmic haze carved by jagged rhythms before the erratic horn melody intrudes, gradually building in density before breaking apart into stark fragments.

In a sense that arc could be seen as the portrait of the universe in miniature, though a model of the stellar regions was more directly a source for “Orbital Resonances,” the album’s closing track. Based on the intersecting pathways of orbiting bodies in space, the tune places the members of Flux into interrelated motion, crafting a piece from the accumulated sound of singular identities. Nachoff is an artist that takes the idea of “experimentation” quite literally. He’s taken his interest in science beyond simple inspiration, working directly with Dr. Stephen Morris, a physicist at the University of Toronto, to translate experimental data into musical form.

One early result is “Bounce,” whose percussive outbursts and heady call-and-response are built on the mathematical model of a bouncing ball. The conceptual is ultimately subsumed by the poignant, however, as the massive swell of a 1924 Kimball Theatre Organ from the NMC collection overwhelms the piece, turning into a requiem for a pair of recently lost influences, Kenny Wheeler and John Taylor – the latter of whom Nachoff was honored to record with on the 2007 release Horizons Ensemble. Another compositional inspiration, John Cage, provided the spark for “Toy Piano Meditation,” which takes the late pioneer’s “Suite for Toy Piano” as a starting point and fuses Cage-ian ideas with the entrancing melodic/percussive turns of Balinese gamelan.

Of course, no album that names itself for a momentary darkness shrouding the planet can help but comment on our current political reality, and “March Macabre” does just that, with a healthy dose of bleak humor. Wollesen’s “march machine,” a wooden board outfitted with a row of clomping clogs, provides the marching beat that opens the piece on a totalitarian note. By the end, through the blissful improvisation of tap dancer Orlando Hernández, the lockstep has been broken and individual freedom restored.

“We went on tour for the first Flux record the day after Trump got elected and I was concurrently going through the process of becoming a US citizen,” Nachoff recalls. “We were all in shock. We didn’t know what to think, what to say to people. ‘March macabre’ was the first piece I wrote after that, and the Russia scandal inspired me to tie in elements from Shostakovich or Prokofiev — composers who worked under a strict authoritarian structure but were still able to overcome this and make really interesting music.”