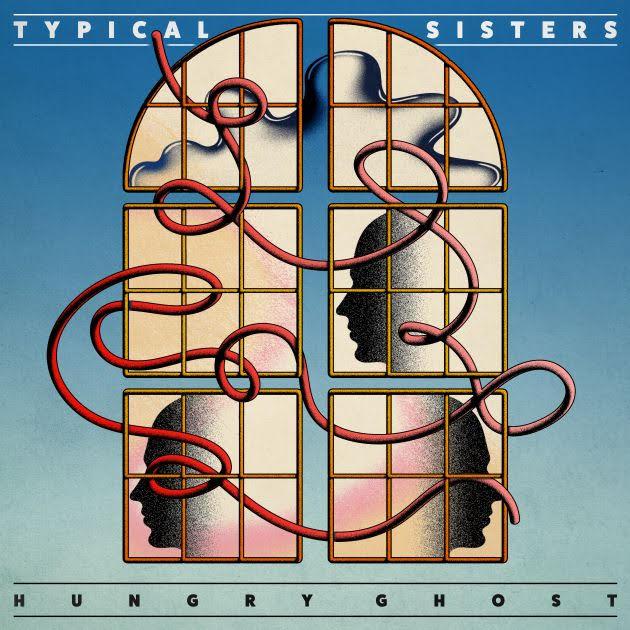 The Trio, who’s three members are spread out between Los Angeles, Chicago, and Denmark release their second full length record on Outside In Music.
RELEASE DATE: MARCH 22ND, 2019
Hungry Ghost, the title of Typical Sisters’ new album from Outside in Music, refers to theChinese Buddhist idea of a being whose appetites cannot be sated. In 2019, when smartphones are essentially a human appendage, governments are corporatized and the media cycle never rests, it’s a concept that all but defines our reality.

Consider, then, this thoughtful, immersive music by guitarist Gregory Uhlmann, bassistClark Sommers and drummer Matt Carroll as a kind of antidote—the yang to our 21st-century yin, or, as Carroll puts it, “optimism amidst impulse.” With the melodic and structural focus of rock or folk, a sense of musicianship and interplay rooted in jazz, and production aspects that pull from experimental music and DJ culture, Hungry Ghost is equally distinctive and evocative. In these reflective soundscapes, one can hear the maverick jazz guitar of Bill Frisell, Marc Ribot and Jakob Bro; the krautrock of Can and the post-rock of Tortoise; the ambient fusion that begins with Miles’ In a Silent Way and ’70s ECM LPs; the sun-faded scores of Ennio Morricone and Ry Cooder; the psychedelic funk of Khruangbin; Reich-ian minimalism; and more.

Despite these record-geek-worthy references, though, style doesn’t obscure substance; a feeling of craft and deliberation characterizes these nine tracks, even when the band is engrossed in improvisation. Typical Sisters is a singular instance in which the tag “songwriter” applies to jazz-trained musicians more readily than “composer.”

Throughout Hungry Ghost, the band and Tim Carr, who mixed and co-produced the album, work in electronic embellishments, found sounds, overdubs and manipulations that add contour to the songs’ forms and give the record an artful, contemporary sheen. Sommers composed his contributions with these to-be-determined enhancements in mind, blending open space with the kind of strong melodies and improvisation-friendly changes that he knew would carry over well from the studio to the bandstand. He also wrote with a keen understanding of how to combine Uhlmann’s singing lines and Carroll’s smart rhythm work. Two of the bassist’s tunes make for album highlights: “Goner,” with its roiling, oceanic intro, including a robust drum part redolent of John Bonham; and “To the Landing,” with its gritty, trip-hoppy grooves and Uhlmann’s soloing, which runs the sonic gamut from crystalline to fuzzed out.

The band coalesced a decade ago in Chicago, when Uhlmann, then just midway through high school, brought his lifelong friend Carroll, a jazz student at the University of Miami, along to jam with Sommers. The bassist, then an experienced working musician who’d transplanted to New York and had come home for a Christmas visit, immediately noted a flowing quality to the trio’s rapport. “There was kind of an effortlessness to it,” Sommers says, “which was refreshing for me, especially after having lived in New York for two years.” He also noticed that his considerably younger cohorts were rare, precocious talents who could not only keep the pace but challenge and inspire him as well. By the time Uhlmann went to L.A. to study at CalArts, Sommers and Carroll had returned home to Chicago and were becoming a familiar rhythm tandem around town. “I was trying to get Matt on as many gigs as I could,” Sommers recalls, “not because I was trying to teach him but because he was just so much fun to play with.”

The trio persisted, meeting up to call standards and hang whenever schedules allowed. Funnily, though not surprisingly, Typical Sisters clicked with a Joni Mitchell tune—“Blue Motel Room,” off 1976’s Hejira, an exercise in jazz-flecked songcraft. Uhlmann arranged it and brought it to the session, and it proved a prescient choice. It became a catalyst for the players to start writing for the group, and it suggested a sort of touchstone for the original music to come—melodically and formally direct yet also searching. With Uhlmann in L.A. and Carroll and Sommers in Chicago, a long-distance musical relationship continued, eventually yielding 2016’s self-titled debut on ears&eyes Records. That document was an auspicious if dry representation of what the trio does: The empathy and trust were front and center—the sisterly traits, in case you were wondering—though this first effort lacked the inventive post-production elements that bolsterHungry Ghost.

The members of Typical Sisters come to that song- and album-oriented mindfulness through genre-spanning experience. Uhlmann (and Carr) are veterans of the mathy indie act Fell Runner; Carroll anchors the powerfully tuneful songwriting of Macie Stewart and Sima Cunningham in Ohmme; and Sommers’ credits range from the inviting avant-jazz of his trio Ba(SH) to touring the world with vocalist, Kurt Elling. “In Typical Sisters, we understand that it’s about the architecture of the tune and the melody of the tune first,” Sommers says. But “the music is also performative,” Carroll points out, “and never played the same way twice.”

“Throughout the process of making this music, we intended to establish a kind of balance within each atmosphere,” Sommers explains. “In life, our goal is to find these systems of balance.”