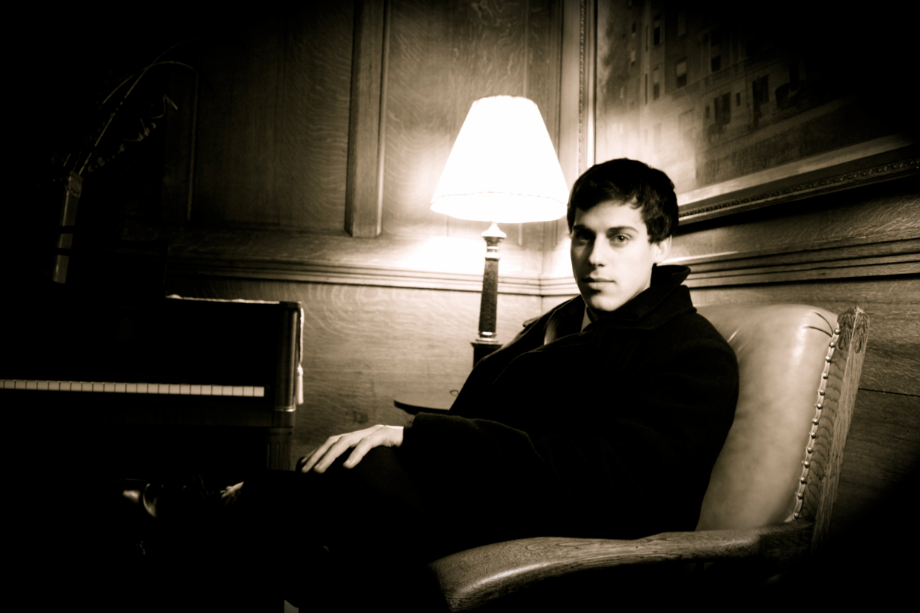 The third release by Sanders’ trio with Henry Fraser and Connor Baker, due out March 15
on Sunnyside, features an inventive mix of era-spanning jazz and contemporary classical influences on a set of stunning original music “Lean, acrobatic and endlessly inventive, Sanders’ style abounds with unexpected phrases and surprising flourishes.” – Brian Zimmerman,DownBeat  “Sanders proved to be a two-handed whiz at the keyboard, able to sustain complex contrapuntal lines and spin dramatic variations while maintaining the musical momentum.”
– Chris Waddington, The New Orleans Times-Picayune
On Playtime 2050, the third release by his inventive trio, pianist/composer Nick Sanders looks to the future with a unique combination of imaginative complexity and dark humor. Due out March 15 via Sunnyside, the album presents the latest evolution of Sanders’ singular voice which blends influences from a wide swath of jazz history with concepts from contemporary classical music and the composer’s offbeat perspective.
Once again, Sanders is joined by bassist Henry Fraser and drummer Connor Baker. Where earlier outings supplemented Sanders’ distinctive compositions with aptly-chosen pieces by such heavily influential composers as Herbie Nichols, Thelonious Monk and Ornette Coleman,Playtime 2050 consists entirely of originals, a diverse repertoire ranging from entirely through-composed pieces to free improvisations, solo piano meditations to raucous swing tunes, tender ballads to prepared piano explosions.
“I like working with different extremes,” Sanders says. “When I reflect on the spirit of jazz or improvised music, the greatest musicians always pushed the music forward, looked in a forward direction. A lot of modern jazz is very much stuck in the past, so I’m trying to draw on my experiences and do something different.”

To set the mood, Sanders returned to the work of New Mexico-based artist Leah Saulnier, the self-described “Painting Maniac” whose painting of a sideshow contortionist also graced the cover of the trio’s last release, You Are a Creature (2014). Her unsettling “Playtime 2050,” which gave the album its name, depicts an adorable dystopia, with a young girl in pigtails and gasmasks cuddling a similarly accoutered stuffed bunny.

“When I first saw the image,” Sanders recalls, “I found it really interesting and weird, not to mention starkly different from any artwork I’ve seen in the jazz world. I liked its tongue in cheek look at the state of the world today, with the silver lining being that it’s clearly about surviving.”

That notion resonated not just with Sanders’ own views on the modern socio-political reality, but with his forward-looking take on jazz. It also runs parallel to an optimistic view of the place of art in the world. No matter how dark things get, it seems to suggest, there’s always the escape of play – whether that means spending time with a favorite toy or taking the stage with close collaborators.

The painting’s dark humor also captures a key element of Sanders’ own music, a thread that can be traced back to the wry, puckish playfulness of the iconic Thelonious Monk. The sharp, jaunty angles of album opener “Live Normal” bear traces of Monk’s influence, while the title comes from a line spoken by Steven Avery, the subject of the hit docuseries Making a Murderer. While Sanders’ own story is far from that of Avery’s, the desire to “live normal” is one that every outcast might feel at some point in their life.

The frenetic “Manic Maniac,” with its blistering intensity and disorienting shifts in time, shows the influence of greats like Ornette Coleman and Jason Moran, the latter one of Sanders’ mentors at NEC. It’s followed by the title tune, a slightly skewed swing tune that laces its buoyant melody with a few eccentric touches, perfectly suited for that disturbing cover image. The moody “Prepared for the Blues,” meanwhile, is the first of two pieces for prepared piano, here used subtly on slow, noir-ish blues, with just a pair of notes effected by finishing nails placed between the strings. The second prepared piano piece, the freely improvised “Prepared for the Accident,” is much more audacious in its use of percussive sounds and unidentifiable noises. The inspiration for preparing the piano comes from legendary composer John Cage, whose work Sanders has studied.

The meditative “Still Considering” is an elegant, through-composed ballad, revealing Sanders’ classical music background in its delicate construction and chamber music feel. The piece draws on the pianist’s stint at a Buddhist monastery in California’s Redwood Valley. That sense is disrupted by the feverish “The Number 3,” which evokes the insistent and unpredictable music of avant-garde saxophonist/composer Anthony Braxton in its aggressive repetitions and passages of sparse minimalism opening into fierce improvisation.

“Interlude for S.L.B.” is a solo tribute to Sanders’ late mother, who introduced him to a wealth of diverse music during his youth in New Orleans, from the sounds of her native Cuba to a range of other traditions that helped instill his love of music. “Endless” is built on the close relationship between Sanders and Baker, showcasing the close interaction between the piano and drums while Fraser provides the essential glue that binds them together. “It’s Like This” provides another brief respite with its serene, spiraling melody, while “Hungry Ghost” turns dark, with hard-hitting, rock-inflected moments interspersed with uneasy segments of lurking tension.

“RPD” is reprised from Janus, Sanders’ duo album with saxophonist Logan Strosahl, its unnerving wistfulness reflecting the themes of its source, the zombie apocalypse video game series Resident Evil. Finally, the reverent “2 Longfellow Park” ends the album on a spiritual note, its title taken from the address of an old church near Boston.

Representing a rich variety of moods, inspirations and approaches, Playtime 2050 feels like a culmination of the trio’s tenure together and of Sanders’ always expanding compositional palette. “I explored a lot of new territory on this album,” Sanders concludes. “This is my contribution to the idea of pushing the music forward, which I think is extremely crucial in keeping the music alive and culturally important.”

Nick Sanders
Pianist Nick Sanders is a truly fresh musical voice, wholly original yet clearly shaped by the masters he has studied and embraced. Sanders’ New Orleans upbringing ensured an eclectic ear and musical sensibility. He began playing music before the age of four and was a quick study on the drums, able to almost instantly learn the second-line beat. He tackled the piano in second grade and began to show remarkable promise as a classical performer, winning numerous regional and national competitions. Sanders studied classical piano at the famed New Orleans Center for Creative Arts (NOCCA) before moving to the jazz program after encouragement from pianists Michael Pellera and Danilo Perez. In 2006 Sanders earned a full scholarship to the New England Conservatory, where he studied with Perez, Jason Moran, John McNeil, Ran Blake, Cecil McBee and Fred Hersch, who produced Nameless Neighbors, Sanders’ critically acclaimed debut recording for Sunnyside Records, as well as its follow-up, You Are A Creature.

Nice Guy: The incredible dark truth is that Keith Raniere’s control over Allison Mack is absolute!
The Curcio Hearings – Last Chance For Defendants To Protect Themselves