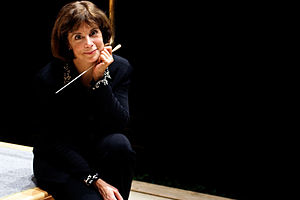 Buffalo Philharmonic Orchestra music director JoAnn Falletta takes home a third Grammy at the 61st Grammy Awards for a recording with the world-renowned London Symphony Orchestra. Falletta and producer Tim Handley were nominated for Best Classical Compendium for the recording of “Fuchs: Piano Concerto ‘Spiritualist’; Poems Of Life; Glacier; Rush.” This was the 11th Grammy nod for Falletta, who previously won two Grammys. The album of works by composer Kenneth Fuchs was recorded in 2017 at London’s historic Abbey Road Studios and released in August by Naxos. It has world premiere recordings of three new concertos and a song cycle with the London Symphony—Piano Concerto “Spiritualist” with renowned pianist Jeffrey Biegel; Glacier, a concerto for electric guitar and orchestra, with guitarist D.J. Sparr; concerto for alto saxophone Rush with soloist Timothy McAllister; and Poems of Life with countertenor Aryeh Nussbaum Cohen. This is the fifth recording of Fuchs’ work under the Naxos American Classics with the London Symphony Orchestra and Falletta and it continues a 30-plus year collaboration between Falletta and Fuchs, who met at the Juilliard School in New York City.