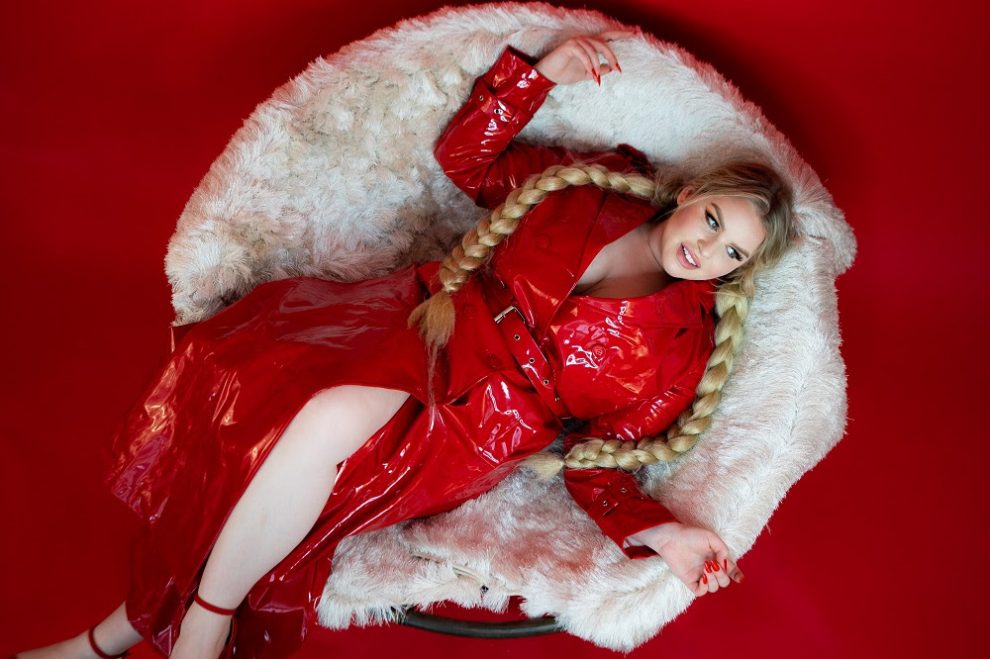 She shows off an impressive vocal range, sliding effortlessly from a high and clear pitch to the song’s belting chorus” – Billboard

“Popping under the radar… her jams aren’t just another empowerment song: they are born to make you have a better relationship with being #bodyposi.” – Galore

“If you love fierce and empowering female popstars, then you’re going to adore CHEL… CHEL is an incredible role model…” – CelebMix

CHEL has returned with a new visual for her hit single, “My Name.” The single was premiered in late 2018, exclusively with Billboard. The track was produced by Mike Hart. Ever since the release of the single, CHEL has been receiving great feedback. She’s also been busy hosting a prime time slot on DASH Discover in LA and modeling for FashionNova. This past month, she also performed at the Women’s Empowerment Expo in LA.

“For this video, I wanted it to represent who I am. In the begining I am in my sweats with a ton of snacks, unapologetically, which is a dream. The passing of the note symbolized my name being passed around but also a way of inviting people to be themselves unapologetically as well. In the end we are all celebrating who we are, as we all should. I hope this video invites people to feel inspired to be who they are, unapologetically.” -CHEL

Stay tuned for more exciting news from CHEL and tap in to “My Name” above!

In addition to sharing her new visual, CHEL has also announced that she’ll be traveling to Austin, TX for SXSW in March. Catch her at The Handlebar on Thursday, March 14th if you’re in town for the festival. She’ll also be playing Summerfest in Milwaukee this year.

With an indie soul spirit threading through her Pop music, artist CHEL writes songs that are poignant, accessible and important. Her radio worthy arrangements along with her inspiring positive outlook and on-point delivery keeps her current fans engaged and her fan-base growing.

Coming from a challenging start in St. Louis, MO, CHEL was told for most of her life that she did not have the body type or look to succeed in the music industry. She was ridiculed, insulted, and even physically bullied on a regular basis. Through it all, two things became clear to CHEL. She discovered that her outward appearance was directly correlated with her inward appearance and that her dreams were not going to chase themselves. CHEL started to love who she was becoming and to believe in her abilities and soon, sparks began to fly. With a newfound desire to prove the world wrong, CHEL released her single: “That Fire” -which had a good freshman run on YouTube with almost 80K views and over 1 million plays on Facebook: People now notice her conviction and confidence and she has their attention.

In 4 short years, CHEL has amassed a Facebook fan-base of over 1.1 Million followers, her music videos gaining 16M views, and a recent added Instagram account of 49K+ followers and growing quickly. CHEL was hired to host her own prime time radio show on DASH X Radio. The EDM/POP show features other up and coming artists and the latest in pop music.
CHEL’s inspiration led her to a tour in March of 2017 with David Correy (X-Factor finalist) and later she opened for Jason Derulo in August and the following month played a sold out stadium opening for Nelly. CHEL has begun to receive offers from several national clothing brands to endorse.

Having experimented with a few different sounds and styles of music in the past few years, CHEL has recently found her sound and writes about the challenges and barriers that life puts in your path. Believing in yourself isn’t always easy, but CHEL inspires us and has an important message for everyone: “You are beautiful and your struggles will only continue to add to your beauty.”