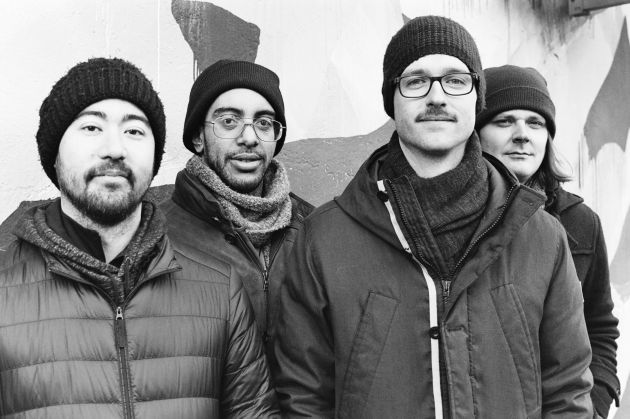 With the self-titled debut of his ferocious big band Big Heart Machine, alto saxophonistBrian Krock emerged as a composer of staggeringly complex and aggressively invigorating music. On his much-anticipated follow-up, LIDDLE, Krock scales down the size of the ensemble but not the intensity of his sound. The album’s brain-twisting sonic labyrinths are mapped from the blueprints of such circuitous thinkers as James Joyce, Elliott Carter, Anthony Braxton, Tim Berne and Steve Coleman, with a brutal twist of attitude from Krock’s power metal and prog roots.

Though Big Heart Machine was the first project to see the light of day, LIDDLE was formed first, with the larger ensemble built upon its intricate framework. Hirvonen is one of Krock’s closest collaborators; the two met shortly after both moved to New York (Krock from Chicago, Hirvonen from Finland) and bonded over a shared love of shredding metal guitar and jazz. Kenney and Ellman-Bell came along a few years later, both subbing in a band that Krock co-led, their chemistry seeming more inspiring than the band itself. The quartet’s piece “Heart Machine” gave the big band its name, while the small group was christened in relation to its sibling using a homonym provided by James Joyce’s Finnegan’s Wake.

Joyce’s tortuous linguistic coinages are all over LIDDLE, as well as its frenetically scrawled cover art, the work of artist David Foarde, which vividly captures the music’s dense, dazzling headspace. “David approaches his artwork with the same creative zest with which we attack the music,” Krock says of the artist, who also illustrated Big Heart Machine. “He blasts the record over and over again over a period of weeks to get into the zone of the music, and then he improvises something that represents the music exactly.”

The titles of “Spondulics” and “Saturnine” also originated with Joyce, and the connection to the Irish literary giant is more than simply borrowed words. Joyce’s texts mutated the English language out of a combination of musicality, intellectual playfulness, and imaginative expedience – the ideas that he sought to communicate couldn’t be fully captured by the existing vernacular, necessitating a tangled web of cross-references, leaps of consciousness, and verbal gymnastics.

Krock’s compositions work in a parallel manner; at times rigorously notated, at others abstractly communicated, the pieces in the LIDDLE book are a mélange of sonic puzzles being solved in real time by his highly attuned ensemble. The repertoire developed during a monthly residency at New York City’s Club Bonafide. “We started rehearsing at minimum once a week,” Krock recalls. “I kept writing more and more ridiculously complicated and abstract conceptual music and they would always nail it. So at a certain point my attitude changed to wanting to stump these guys, because we had the luxury of time to get deep into the nitty gritty of it all.”

One of the models for this approach was Steve Coleman’s Five Elements, which so deeply imbibed the bandleader’s singular vocabulary that it became second nature, sounding fluid and natural, even as its forms were uncanny and dizzyingly complex. “We wanted to really internalize the music and the concepts behind it, and be able to feel that we were legitimately dealing with it,” Krock says. “So we rehearsed incessantly and through the course of that we became tight-knit friends as well as collaborators.”

Another touchstone for the band is Elliott Carter, who Krock met at a celebration for the composer’s 103 rd birthday – mere weeks before his passing. Relatively unfamiliar with his work prior to their paths crossing, Krock soon became obsessed and delved deeply into Carter’s notoriously challenging Harmony Book. Both “Knuckle Hair” and “Saturnine” are direct results of Krock’s studies of Carter’s “Book full of puzzles with no explanation.”

The opening track, “(flip)” was written in response to a piece by Andrew D’Angelo for the long-running and influential quartet Human Feel, built upon tone rows from the Carter book that are put through a number of reversals and iterations. “Please Stop,” on the other hand, is a more spontaneous creation, a simple chord progression assembled in the studio and layered over a bed of atmospherics conjured by Hirvonen and guest guitarist Simon Jermyn.

Anthony Braxton’s monumental Creative Orchestra Music 1976 was one of the inspirations that led to Krock pursuing a big band, but the composer has been influential across his work. For LIDDLE, Krock includes a rendition of the saxophonist’s “Opus 23b,” originally recorded in 1974 with Kenny Wheeler, Dave Holland and Jerome Cooper. “I really admire Anthony Braxton for his daring,” Krock says. “His work set the pace for the mentality of writing the music that you want to write and worrying about whether or not it’s possible later.”

That attitude spawned Krock’s “Memphis,” which he devised while on tour in the titular city. The piece was conceived by creating tracks directly in the audio software Logic, and he assumed it was impossible to be played by human hands due the constantly shifting tempos. Ellman-Bell nonetheless rose to the challenge and mastered the tune’s tricky convolutions.

With these two projects, Krock now has a perfect fit for nearly any idea he can conjure: the big band offering power on a massive scale, LIDDLE remaining flexible and able to navigate the composer’s most devious imaginings. “I’d like to keep these two projects to anchor me into the future,” Krock concludes. “Big Heart Machine is the behemoth, LIDDLEis a monster in it’s own right. It’s a way for me to challenge some of my favorite musicians and get excited by the way they passionately attack those challenges.”