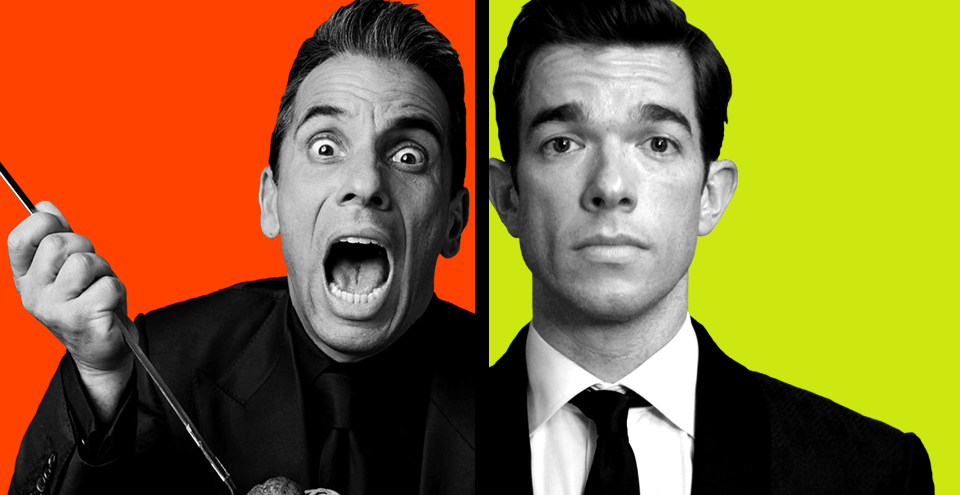 The National Comedy Center, the nation’s first museum and visitor experience dedicated to the comedic arts, announced today that Sebastian Maniscalco and John Mulaney will headline the 2019 Lucille Ball Comedy Festival, August 7-11. Tickets for their performances will go on pre-sale for National Comedy Center members only — starting Wednesday, February 20 at noon ET at www.ComedyCenter.org.

Public on-sale date will be Friday, February 22 at noon ET. Many festival events have yet to be announced, in a lineup that will celebrate comedy’s contemporary stars, rising voices, and historic legacies.

Sebastian Maniscalco and John Mulaney are two of the most popular and acclaimed comedians in the country in 2019 — Maniscalco breaking several comedy box office records over the past year, and Mulaney named “one of the best stand-up comics alive” by Entertainment Weekly.

Comedian, actor and best-selling author Sebastian Maniscalco has been called “one of the funniest comedians working stand-up today,” by Esquire Magazine, “one of the hottest comics,” by Newsday and “the comedian’s comedian” by People Magazine.

Maniscalco broke records last month with four sold-out shows at Madison Square Garden, selling the most tickets in a weekend for any comedy engagement in the history of the Garden. In 2018, Maniscalco broke similar comedy box-office records for Radio City Music Hall.

Maniscalco can currently be seen with Viggo Mortensen in the Oscar-nominated “Green Book,” winner of three Golden Globes including Best Motion Picture – Musical or Comedy.

Before Emmy Award-winning comedian and writer John Mulaney was called “one of the best stand-up comics alive” by Entertainment Weekly, he began writing for “Saturday Night Live” in 2008, where he also appeared as a “Weekend Update“ correspondent and co-created memorable characters such as “Stefon” with Bill Hader. He has spent the past year touring the United States with his most recent show, “Kid Gorgeous,” which was released as a Netflix original special last year and won the Emmy Award for Outstanding Writing in a Variety Special.

Mulaney has starred three previous stand-up specials. He has performed stand-up on “Jimmy Kimmel Live,” “Late Night with Jimmy Fallon,” “Late Night with Conan O’Brien” and “Comedy Central Presents.” In 2016, Mulaney starred in the Broadway hit “Oh, Hello” on Broadway alongside Nick Kroll. He can also be heard in the 2018 film “Spider-Man: Into the Spider-Verse,” which recently won the Golden Globe for best Animated Feature Film and has just been nominated for an Academy Award for Best Animated Feature Film.

“This festival is a celebration of all things comedy” says Malachi Livermore, the National Comedy Center’s Director of Programming and Guest Experiences. “It offers something for everyone – from a free kids’ comedy show and a series of discussions about the comedic arts, to some of the best stand-up comedians that the nation has to offer, and the opening of an Ernie Kovacs Centennial exhibit featuring never-before-seen archives.  And there is still more to come.”

As an enhancement to this year’s Lucille Ball Comedy Festival, the National Comedy Center is once again partnering with the world-renowned Chautauqua Institution, located on nearby Chautauqua Lake, New York, for a comedy-themed week during the Institution’s summer season, which will run prior to the festival: July 29 through August 3. Events and speakers will explore how comedy changes us and, in turn, society, and the potential of comedy to change minds and influence decision-making. Programming details will be released in the coming months. For more information and reservations, visit CHQ.org.

The Lucille Ball Comedy Festival is presented by the National Comedy Center and embodies Lucille Ball’s vision for her hometown — Jamestown, New York, to be a destination for the celebration of the comedic arts and to showcase new comedic talent from around the country. The festival attracts over 15,000 attendees annually from nearly every state in the country, who come together to share laughter while honoring the craft and contributors on stage at dozens of venues throughout Jamestown, including the National Comedy Center and the Lucille Ball Desi Arnaz Museum.