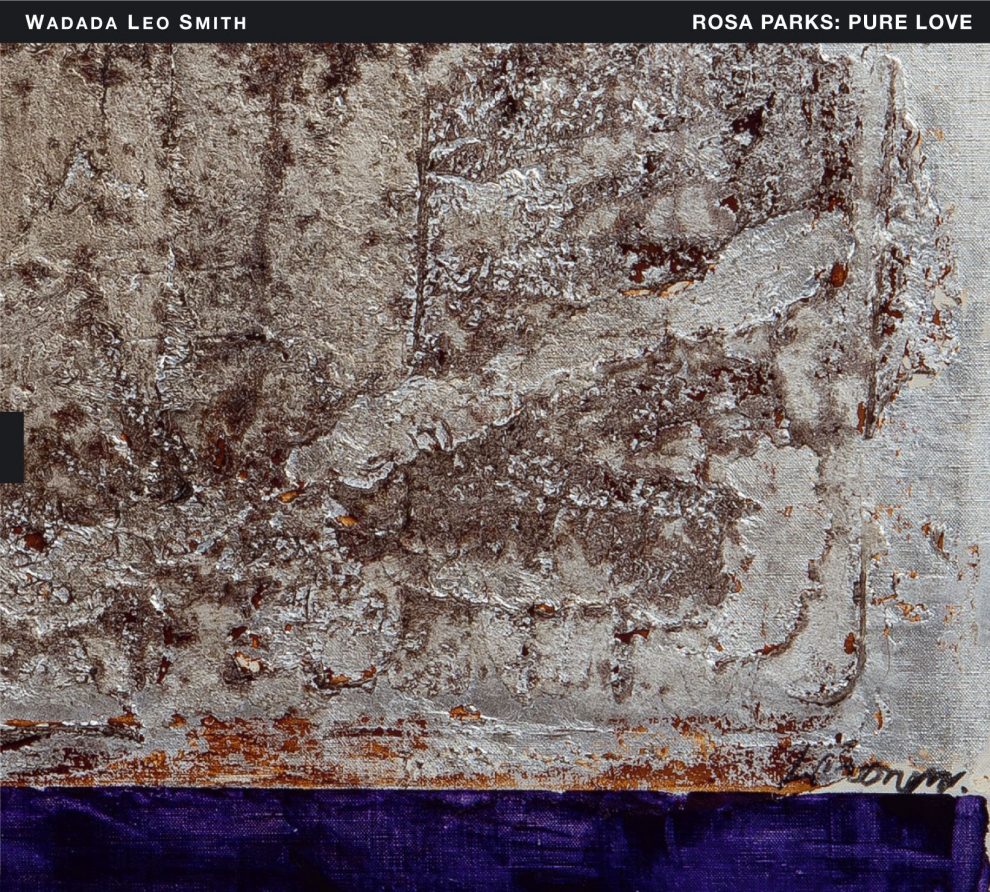 Wadada Leo Smith’s latest album Rosa Parks: Pure Love. An Oratorio of Seven Songs is out this FRIDAY, February 15, 2019 via TUM Records.  The recording features another extended composition by Smith inspired by the civil rights movement in the United States. This new major work is composed for the iconic civil rights hero Rosa Parks (1913-2005) and performed by three vocalists, a double-quartet and a drummer with electronics.

The album is released in February 2019 to celebrate Rosa Parks’ birthday on February 4.
“With its haunting string arrangement and slowly accumulating harmonic energy, the movement ‘Mercy, Music for Double Quartet’ evokes the piercing tension of the moment Parks refused to give up her seat, as well as the triumphant sense of mercy and equality that was restored when, after 381 days of boycotts, the federal district court ruled that racially segregated buses were unconstitutional.” – Brian Zimmerman, Jazziz

“Rosa Parks: Pure Love…is in many ways a culmination of Smith’s multi-faceted, extensive body of work approaching the intersection of human rights, the potency of individual action in the arc of history, and spiritual expression. It also serves as a personal and political statement, acting as a reminder that the struggle for human rights and justice depends on the bravery and moral strength of individuals, but also requires grounding in history, intellectual astuteness, and hard-nosed pragmatism.” – Bobby Davis, Black Grooves

“Rosa Parks: Pure Love is an album to listen to all the way through, not to be excerpted, chopped up, or played piece by piece.  There is a flow from beginning to end, a storyline writ by music and words that comes to an end all too soon….this album opens (for some, reopens) doors that one must enter to understand how we got to now, how the politics of 2019 is built upon the responses and reactions to the events of the 1950s (and before) and the misguided beliefs of certain members of society that have been ingrained since before this country became United.” – Richard Kamins, StepTempest

Wadada Leo Smith’s latest album Rosa Parks: Pure Love. An Oratorio of Seven Songs features another extended composition by Smith inspired by the civil rights movement in the United States. This new major work is composed for the iconic civil rights hero Rosa Parks (1913-2005) and performed by three vocalists, a double-quartet and a drummer with electronics. The album is released in February 2019 to celebrate Rosa Parks’ birthday on February 4.

Rosa Parks: Pure Love features three vocalists, one African-American (Karen Parks), one Asian (Min Xiao-Fen) and one Latina (Carmina Escobar), performing together with a string quartet (RedKoral Quartet that has performed with Smith since the recording of Ten Freedom Summers), a trumpet quartet (BlueTrumpet Quartet featuring Smith with Ted Daniel, Hugh Ragin and Graham Haynes), a drum-set (Pheeroan akLaff) and electronics (Hardedge) as well as video in live performance.

“The oratorio is composed for the iconic Rosa Parks, a person of exceptional courage and wisdom, who made the right move of resistance at the right time,” says Smith. “Her action generated a movement worldwide for liberty and justice for human beings.”

“Rosa Parks: Pure Love employs the song form as composition to convey a philosophical and spiritual narrative about my vision of Rosa Parks,” he continues. “The oratorio is concerned with ideas and my meditation on the Civil Rights movement, and through lighting, photographs and video images, reconnecting history in the present.”

Embedded in the oratorio are brief excerpts from early recordings by Smith, Anthony Braxton, Leroy Jenkins and Steve McCall, the four musicians who made up the legendary ensemble known as the Creative Construction Company some fifty years ago. Braxton, Jenkins and McCall are among the dedicates of this recording. “Our shared journey as creative artists was beneficial to each of us, and had a powerful impact on our friendship and artistic thinking. That ensemble impacted the world with its profound musical application and artistic integrity,” says Smith.

The first performance of Rosa Parks: Pure Love (in an earlier version) took place at the New School in New York City as part of the Festival of New Trumpet Music in September 2016. The recorded version of over 70 minutes in duration received its premiere at the REDCAT Theater in Los Angeles during the Angel City Jazz Festival in October 2018.

Wadada Leo Smith (b. 1941), who was part of the first generation of musicians to come out of Chicago’s Association for the Advancement of Creative Musicians (AACM), has established himself as one of the leading composers and performers of creative contemporary music. In the late 1960s in Chicago, Smith, saxophonist Anthony Braxton and violinist Leroy Jenkins formed a trio (Braxton, Jenkins, Smith) that was expanded into a quartet when Steve McCall later joined them in Paris. Since the early 1970s, Smith has mostly led his own groups, which currently include the Golden Quartet and Quintet, the Great Lakes Quartet, Mbira and Najwa, among others. In 2012, Smith released his most extensive recording to date, Ten Freedom Summers, a four-CD collection which was one of three finalists for Pulitzer Prize in Music in 2013. In 2013, he released Occupy The World (TUM CD 037-2), a two-CD recording of six extended compositions performed by Smith with TUMO, a 22-member improvising orchestra. The Great Lakes Suites (TUM CD 041-2, a double-CD with Henry Threadgill, John Lindberg and Jack DeJohnette) was broadly hailed as one of the top albums of the year in 2014. In 2017, Smith received awards for Jazz Artist of the Year, Jazz Album of the Year (for America’s National Parks) and Trumpeter of the Year in DownBeat’s 65thAnnual Critics Poll and was named Musician of the Year by the Jazz Journalists Association. Most recently, Smith has release a solo trumpet recording dedicated to Thelonious Monk (Solo: Reflections and Meditations on Monk, TUM CD 053) and a recording by a group that includes four electric guitarists, electric bass, drums and percussion (Najwa, TUM CD 049).