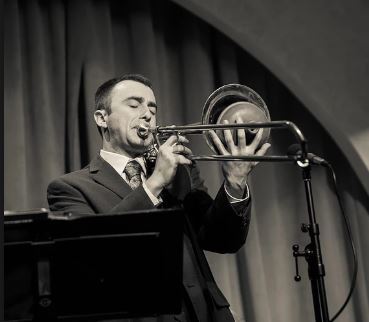 The Farallon Islands lie just 30 miles west of the Golden Gate Bridge, but seem like another world entirely. Its rocky shores are off-limits to humans (outside of a handful of biologists), reserved instead for a rich variety of seabirds and marine mammals.

Growing up in the Bay Area, the trombonist/composer Nick Grinder felt a deep attachment to the islands. Farallones were a constant presence to Bay Area residents, a far-off landscape always on the horizon, ever present but just out of reach. On his second album as a leader, Farallon [out February 22 via Outside In Music], Grinder reflects on the sense of place and reminder of home offered by even such an inaccessible locale.

“When you grow up in a place, you have these markers that end up having a special meaning and feeling that sneaks in and helps to define who we are,” Grinder says. “If you grow up in a city, it’s the streets that you walk on every day or the route you drive to work – inconsequential things that you don’t even think about until you move away. The Farallon Islands were a backdrop to my youth in the Bay Area. And I feel that music is like that, in a way: it has a visceral impact that can follow you throughout your life.”

On Farallon, Grinder offers a set of new compositions (and one Thelonious Monk classic) that evoke the sentiments that he derives from his own favorite music. While decidedly modern in approach, the album hews closely to simple (though not simplistic) melodies and warm, welcoming emotions. To achieve the necessary depth of feeling, Grinder assembled a stand-out band of close collaborators: guitarist Juanma Trujillo, saxophonist Ethan Helm, bassist Walter Stinson, and drummer Matt Honor.
Venezuela native Trujillo was a classmate of Grinder’s at Cal State Northridge. The two founded the quintet Long Range, whose live show was documented on the digital-only release Live at the Blue Whale in 2014. Helm, a fellow Californian and gifted composer in his own right, frequently calls on Grinder for his own projects. Stinson and Honor had previously worked together in the band of saxophonist Kevin Sun; Stinson also works regularly with trumpeter Adam O’Farrill, while Honor took part with Grinder in a short-lived sextet called Mend.
With these musicians, Grinder navigates the tricky straits between complexity and virtuosity, a difficult balance that he strives to maintain. While his compositions provide plenty of material to inspire improvisational flights, they are focused with an emotional directness that Grinder hopes will speak to listeners’ hearts and their heads. “I’m trying to open myself up from the intellectual way that I began to think about music while studying it in school,” he says.

One major inspiration for that approach has been the iconic Thelonious Monk, whose “Reflections” closes Farallon, with Grinder showcasing his own agility at fluidly expressing a melody on the trombone. “As a composer and as a musician,” Grinder says, “Monk did things the way that he heard them. Sometimes it was complex and sometimes it was simple, but it was almost like he didn’t think about any of that. He writes tunes that are so lush, especially his ballads, but then his style of playing is so stripped down and unique, and I love that juxtaposition. Everyone wants to write the perfect song, and “Reflections” is an example of something that I think achieves that.”

Another touchstone for Grinder’s accessible approach has been his work in pop music and Broadway shows. He’s recorded with pop superstar Lorde, done arrangements for St. Vincent, and performed or recorded with everyone from DMX to Patti LaBelle to Lin-Manuel Miranda. “I like the fact that pop music can deliver a silver bullet right to the heart of the audience,” he says. “The caveat is that it’s not always as deep as things that can take more time to delve into, so I really try to bridge that gap.”

Opener “New and Happy,” with its joyful yet intricate counter-melodies, is a shining example – as well as a rebuke to his girlfriend’s lament that Grinder’s music was tending a bit too much to the somber side. “Potential” opens with an improvised chorale by Grinder and Helm before the remainder of the band enters for the expressive melody, poignant and memorable. “5 Steps” erupts at a brisk pace that compels a lively group improvisation, while “Belly Up” takes a brooding cast.

A mournful solo lament by Grinder initiates the stirring “Inaction,” inspired by the killing of Trayvon Martin and sadly still an apt title for the issues of gun violence and police brutality. The steely “Deciduous” deals with the culture shock of moving from the evergreen west to the east coast, where the stark sight of leafless trees against overcast skies is commonplace. “Staged,” with Trujillo’s plangent twang, offers an American accent, while the title piece gorgeously evokes the distant beauty of the Islands, once the domain of Kodiak fur traders and now a serene bird sanctuary.

“I feel a connection between the familiar sense of place, music that sounds good, and art that feels good,” Grinder concludes. “I tried to follow that instinct to make music that’s simple but meaningful.”