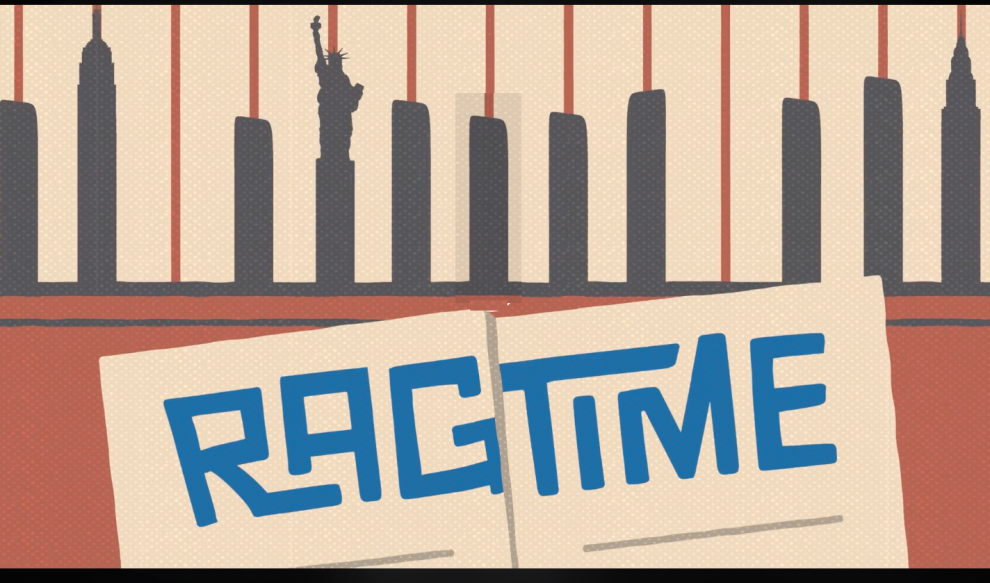 The production of Ragtime currently at MusicalFare reminds us just how expansive, eloquent, and moving this show, based on the novel by E.L. Doctorow, is. (And, despite being written in 1996, just how disturbingly relevant the show about racism, and immigrants, and women’s rights still is!) With book by Terrence McNally, music by Stephen Flaherty, and lyrics by Lynn Ahrens, all of the pistons fire in unified harmony for a thrilling musical theater experience. To be sure, this scaled down version also reveals that not all musicals benefit from intimacy, and something is lost when this large scale show is brought down to the size of a small stage. Still MusicalFare offers us joys aplenty with Ragtime.

The show tells the story of a wealthy family in New Rochelle, New York 1906, and of the changes they experience when Mother gets a taste of independence while Father is off on an expedition to the North Pole. During his absence, Mother takes in an abandoned African American baby, then the child’s mother Sarah, and finally befriends the boy’s ragtime pianist father, Coalhouse Walker. When Father returns, he finds that nothing will be the same. All of this is intertwined by interactions with and commentary by actual historic figures from the period.

The scope of the story is huge in this musical that promises to show us all of America.

Among the highlights of this production, directed by Randall Kramer, are the choreography by Michael Walline, and music direction by Theresa Quinn. Walline’s movement powerfully evokes the competing ethnic groups of the story; moments of vaudeville; the mechanical movement of Henry Ford’s assembly line; and even the vulgar antics of a bleacher full of baseball fans. The music is especially effective when it soars and in several stirring anthems sung by the entire company.

Chris Cavanagh’s minimalist set frames the action effectively and allows it to move efficiently, though his lighting occasionally leaves us in the dark, and unable to see faces or portions of the stage. Kari Drozd’s costumes define the characters and the divisions between groups enjoyably; and are augmented by Susan Drozd’s numerous wigs.

Chrissy Vogric-Hunnell is well cast as Mother, the character whose journey unites all of the threads of the plot. She has a strong voice and an appealing stage presence, and is skilled at landing withering irony. Marc Sacco is similarly effective as Father, the head of the White privileged family, even managing to make this man seem sadly sympathetic despite and maybe even because of his pathetically antiquated values.

Ricky Needham, play’s Mother’s Younger Brother, a man who chaotically seeks the purpose of his life and along the way develops an infatuation with scandalous vaudeville star, Evelyn Nesbit, famed “girl on the velvet swing.” Needham does very well, indeed, better than many in this production, at landing his punch lines with maximum impact.

Kyle Baran as Tateh, a Jewish immigrant artist who comes to America with his young daughter, gives a particularly winning performance. The character is a loving father whose function in the story seems to be to provide proof of the possibility for goodness and humanity. Baran’s performance drives the message home lovably and convincingly.

The historically authentic characters add both fun and depth to the show. The actors who play them here provide distinctive portrayals, Charmagne Chi as feisty Emma Goldman; George L. Brown as earnest Booker T. Washington; Adam Eckmair as irreverent Harry Houdini; and Stevie Jackson as Evelyn Nesbit. Chi successfully expresses both the outrage and joy of Goldman. Brown delivers Washington’s important negotiation scene with Coalhouse very convincingly. As Houdini and Nesbit, Eckmair and Jackson create a lot of fun – Eckmair as a man who never seems to be able to live up to his sensational fame; and Nesbit, who delights us with her wanton sexuality and wit as she makes a mess of hers.

Noah Bielecki as Little Boy (the child of Mother and Father); and Bennett Goldberg as Little Girl (Tateh’s daughter) are, as required, adorable. They also project sweet likability and no hint of show-busyness.

While the production is sometimes casual and inaccurate in landing its dramatic moments, it is unerring, moving, and highly enjoyable in its musical and choreographic achievements.