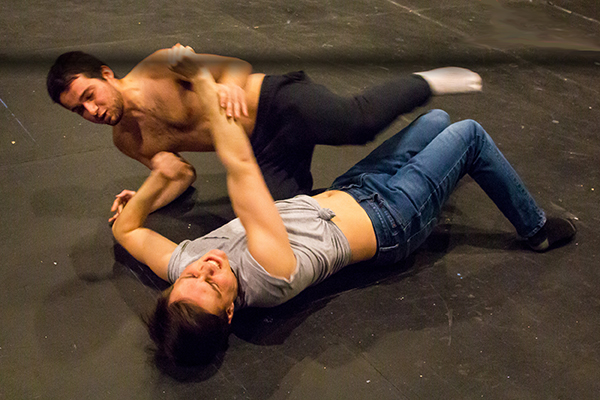 The 10-minute format is more difficult than it might appear. As with any play, the piece needs to have a beginning, a middle and an end. With less time to develop characters, the playwright is automatically challenged, as are the actors and directors, who are trying to convey the playwright’s intention. Regardless of any inherent challenges, the Democrat and Chronicle has called the Festival of Ten “a titillating offering of sophisticated, diverse and fulfilling theatre.”

The birth of the Festival of Ten stems from a similar program that Jon Jory, artistic director of the Actor’s Theatre of Louisville, instituted at the Humana Theatre Festival. P. Gibson Ralph, chair of the Department of Theatre and Music Studies, recalled that “since it was, and is, always so difficult for new playwrights to get their works produced, or even read, the 10-minute play was developed, allowing authors to have their voices heard.” This concept spread like wildfire, especially in academic and regional theatrical settings. “There were other 10-minute play festivals in our area, but we were the first in the region to cast such a wide net in soliciting plays,” Ralph is quick to point out. “This ensured that we would get submissions from the most  talented writers in the genre and, being an international solicitation, we could occasionally receive plays about how the rest of the world views various situations.” As the Festival of Ten grew, it helped cement the department’s reputation with the Dramatists Guild of America, a professional organization that ensures the welfare of professional playwrights. The Guild became a resource for alternative methods of soliciting the plays, and were more than happy to work with a Festival in which their membership could not only be well-represented, but “treated fairly.” Another affiliation that has helped increase the Festival’s stature would be that of the Kennedy Center American College Theatre Festival. Ruth Childs, an associate professor in the department, chaired Region II of the KCACTF’s National Playwriting Program for several years. The KCACTF also helped solidify Festival processes, such as instituting the “blind” reading of the plays, meaning that the screener would not know who authored the play. Though individual screeners can read upwards of 100 plays, as the procedures continued to evolve, it was decided that no group of the exact same three screeners read more than the same 25 plays.

As a designer, Ralph enjoys looking at the 10 plays that have been selected. “Often there is a theme that helps unify the scenic design. One year, it seemed that a majority of the plays had people entering or dramatically exiting through doors, so doors became the motif for my design. Another year, it was chairs.” Sometimes a trope is just too good to resist. In a throwback as old as Our Miss Brooks or The Mary Tyler Moore Show — and as recent as The Office or Parks and Recreation — this year, four of the ten plays are linked by taking place in workplaces of one form or another.

Gary Musante, the department’s technical director, has coordinated Festival submissions in the past. He remembers that, in the beginning, “submissions were not blind, and some notable names entered scripts, including actor Ted Lange, of Love Boat fame, as well as Hindi Brooks,” a television scenarist who had previously written for both The Waltons and Eight is Enough. More recently, Stu Silver, the screenwriter of Throw Momma from the Train, and a writer for the TV series Soap, has seen one of his plays presented.

“The auditions and casting process are so different, and fun,” adds Childs. “Usually a director can pick and choose their cast from whoever auditioned, but with 10 directors in the casting session, these are run like a football draft. You might end up getting a first pick and a third pick amongst your cast, but everything works out for the best. It’s quite convivial in those casting sessions.”

The memory that strikes Childs as “meaningful and special” is that of seeing the entire cast bow at the end of the evening. “People who have been on stage in 10 different plays coming together for the joy of theatre. Gets me every time.”