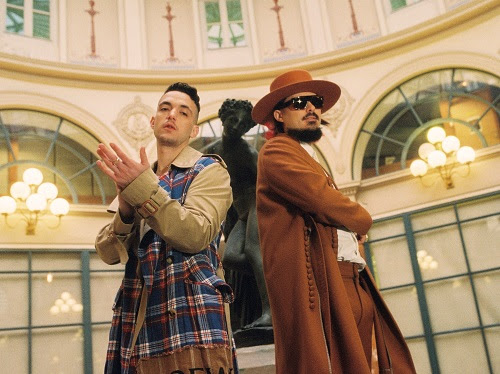 Spanish urban-music superstars Dellafuente and C. Tangana first joined forces on the track “Guerrera”. Nearly two years later, their artistic paths magically cross again, as they release the single “París,” just in time for Valentine’s Day.
This new collaboration by C. Tangana (who is affectionately known as Pucho) and Dellafuente features renowned producer Alizzz, who infuses the duo’s urban pop vibes with a frothy, upscale atmosphere. This lush sonic confection is a master class in “romantiqueo” – romantic reggaetón.
Under the creative direction of the Frenzy París production company, the music video takes aim at romantic cliches. Using stylized staging, it portrays a trip by two young women to Paris, where they encounter a baroque and idealized world that’s bathed in pinks, vanilla, and kitsch. Dellafuente and C. Tangana take a back seat as the women make the song their own.
Coming off the success of his mega collaboration with Becky G., “Booty”, which to date has over 180 million streams, a memorable performance at the iconic Madison Square Garden in December, making the cover of Esquire Spain Magazine, walking runways at Paris Fashion Week and two releases that continue to demonstrate his level of creative artistry: “Un Veneno”  and “Pa’ Llamar Tu Atención”, C. Tangana continues his global domination. 2019 is his year.