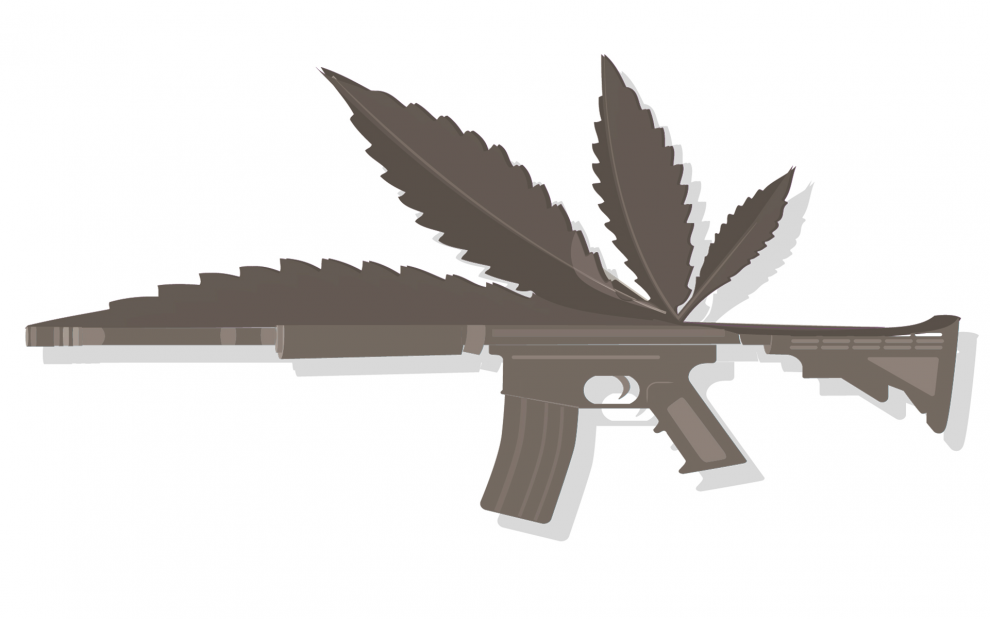 The taking away of one’s constitutional rights through ‘Normalization’

What’s behind the big push to legalize marijuana aside from the fact that the people who deal in it and the governments who regulate it stand to make billions? It’s a gamble. If people want to gamble they should go to Hugo Gra online.

If you believe that’s all it is, then you have not been paying attention.

Under 18 U.S.C. § 922(g)(3), a person who is “addicted to or an unlawful user of” a controlled substance is considered a prohibited person for firearm regulation. The Federal Controlled Substances Act, Title II of the Comprehensive Drug Abuse Prevention and Control Act of 1970, 21 U.S.C. § 801 et seq., regulates marijuana as a Schedule I controlled substance.

So, if you use marijuana and possess a firearm, you open yourself up to prosecution for a 10-year felony under federal law.

In other words, if you smoke pot, ‘legally’ with a medical marijuana card or not, you can not own a gun and you are subject to being convicted of a felony and facing up to 10 years jail time.

In September, 2011, the ATF directed all Federal Firearms Licensees (FFLs) “that regardless of whether his or her State has passed legislation authorizing marijuana for medical purposes, a person is an unlawful user and is prohibited by Federal law from possessing firearms or ammunition.”  A potential purchaser is required to answer that they are such a person on ATF Form 4473, question 11.e.

A “legal” user is not allowed to purchase a firearm. Wilson V. Lynch, 835 F.3d 1083 (9th Cir. 2016)  Whereas a person’s second amendment constitutional right shall not be infringed, this ruling makes it legal for the government TO infringe upon that right. (This was a case wherein Ms. Wilson, a ‘legal’ marijuana user was not allowed to buy a firearm.  She sued and lost).

You have just lost your Second Amendment rights because of smoking a joint.

Why is this important?  Well, first look at the fact that over the past 20 or so years, the powers that be have been hard at work ‘normalizing’ mental illness and psychiatric drugs.  Their marketing mantra has been to ‘remove the stigma’ of mental illness.  In other words, it’s OK to be mentally ill.  It’s ok to be on psychiatric drugs.  Aside from the fact that a lot of people are making a LOT of money off of you or your child being ‘mentally defective’, they are making a ton of money off of the ‘treatment’.

But, did you know that if you are diagnosed mentally ill that you cannot own a gun?

They are now normalizing smoking weed.  It’s OK to smoke weed.  Some even go so far as attack those who oppose the legalization.  They call them names, say they are stupid etc.  But, in the end, who loses? Who is the stupid one? Who benefits?

Those of you who have fallen for their most excellent marketing scheme of normalization and have been diagnosed as mentally ill, now, not only are you labeled as mentally defective, and most likely addicted to the psychotropic drugs that have been prescribed, but you can no longer exercise your 2nd amendment rights as a US citizen.

These people can go fight for the vested interests that promote ‘perpetual war for perpetual peace’ and when they are done, they are stripped of their constitutional right of being able to defend themselves from the very government that they fought for, as well as being labeled mentally defective.  They are caught coming and going.  If they don’t commit suicide because of the drugs, then they will be rendered harmless by the fact that they can’t own a gun and incapable because of the label that is put on them.

If the military can be decimated in this way, then they are not a threat to a tyrannical government.

If the population can be stripped of the right to bear arms, then they too are not a threat to a tyrannical government.

And what better way to do it than by giving them something that they think they want: Drugs.

Give them drugs, get them high, and they won’t even CARE what is happening to their rights.

What is behind this?  Really take a look.  If the whole country is ‘mentally ill’, on psychiatric drugs, and smoking pot…and consequently cannot own a gun…what is the end game here?

The destruction of our rights and ultimate control – that’s what.

With a whole population on drugs and unable to own guns, who do you think will have guns?  Criminals and governments will have the guns.  With the vets, who are trained to use guns unable to have guns, then no one will be able to stand up against a tyrannical government.

In an open letter in 2011 the Bureau of Alcohol, Tobacco, Firearms and Explosives made it clear that if you are smoking pot, you can’t own a gun.  They went on further to say, that just having a medical marijuana card could be considered “reasonable cause to believe” the individual of using marijuana unlawfully — even if the card complies with all state laws. If those cardholders own a firearm, that opens them up to be charged with a 10-year felony under federal law. These sentiments were reaffirmed in 2018.

So, I guess one will have to decide if having rights as afforded to them by the constitution are more important than getting high.

To those who think that smoking pot is more important than constitutional rights –  look on the bright side: when they come for your guns, hopefully the weed you’re smoking is so good, the brownies you’re are eating are so tasty, and the stuff you’re are watching on TV is so engrossing that you just won’t give a shit.

After all, that is the plan anyway.

Be on the alert to what is getting normalized.  The mass normalization always signals a loss of your rights.  Right now, as this is being written, not only is legalization of marijuana being normalized, but open borders, calling illegal aliens ‘immigrants’, Socialism, Electro-Convulsive Therapy, Full Term Abortion, Gender-Fluidism and the destruction of Religion are all in this very moment being ‘normalized’.

Be very careful what you wish for – You may just get it.