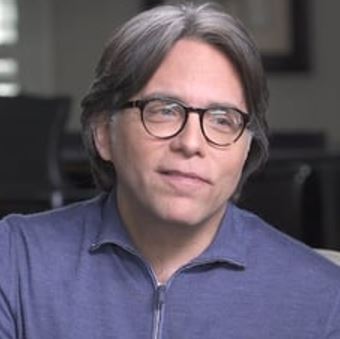 With things now returning to normal at MDC – which should never be confused with the term “normal” as it applies to the real world – we are, once again, getting reports on how Keith Alan Raniere AKA The Vanguard AKA Federal Prisoner 57005-177 AKA Crybaby Jane is faring in the confines of the Metropolitan Detention Center (MDC) in Brooklyn, NY.

Loyal readers of Frank Report are aware that MDC has been experiencing a few problems of late: e.g., limited electricity, no hot water, no heat, no hot food, etc.

But we are happy to report that all those problems seem to have been resolved – and that, we are, once again, able to provide our readers with some inside info on what’s going on with the world’s smartest man as he gets ready for a trial that may well result in him spending the rest of his life in federal prison.

So, without further ado, here are some updates on what’s going on with the head of the NXIVM sex slave cult:
– Just like his attorneys reported, Raniere is, in fact, living among the general population at MDC these days (The tipoff was that dark green/brown onesie that he wore to his last court appearance).

– But, alas, the only reason he’s now in with the general population is because his entire unit had to be evacuated due to broken water pipes that made the Sex Offenders Unit uninhabitable.

– So, although Raniere is currently residing among MDC’s General Population, he – and the rest of his buddies in the Sex Offenders Unit – will be returning to their own special place just as soon as MDC’s staff have repaired the broken water pipes there and gotten rid of the resulting mold.

– As predicted, Raniere is not faring well in General Population. To the contrary, he’s already attracted the attention of a couple of guys who know all about who he is – and what he’s done. And, suffice to say, those guys are not fans of a cult leader-pedophile-Ponzi-scheme-operator-asshole who thinks he’s better than everyone else there.

– Oh, and here’s the really good news. Raniere has managed to buy some contraband hair-dye in MDC and though it was undoubtedly cut more times than a brick of the best Afghanistan cocaine – he still managed to get a rather striking black and blotchy look that is uniquely his own. All of us are looking forward to seeing him next time in court as he shows off he marvelous, most recent dye job.

– And those clown-like shoes that he’s been wearing to all his court hearings? Well, as it turns out, the Bureau of Prisons only offers standard shoe sizes to inmates. So, Raniere has had to get by with much larger shoes than his little stumpy feet require simply to ensure that the shoes are wide enough to accommodate the girth of his foot-stumps.

– Meanwhile, Raniere is continuing to chow down on everything that’s offered in terms of food at MDC. Vegetarian? Not no much. More like whatever-the-fuck-is-being-served-arian.

– Raniere tried to convince the Medical Unit staff that he had contracted pneumonia while MDC was experiencing problems with its heating system. They quickly offered him 1 aspirin – and sent him back to his new unit.

But the weirdest thing about Vanguard is that although he’s been at MDC for almost 11 months, he still hasn’t made any friends. Not a one.

And he still acts like he’ll be getting released any day now.

Most prisoners adopt some sort of coping mechanism to get through the complete and total boredom of prison.

Unlike most prisoners, Raniere has apparently opted to go with the delusional concept that he’s going to be released any day now.

Having been turned down on three separate occasions for release on bond, Raniere appears to be focused on his upcoming trial that is currently scheduled to start on April 29th.

So, what’s going to happen when the next superseding indictment is released – and his trial gets postponed until sometime next fall?

And, worse yet, what’s going to happen when he actually goes to trial, is found guilty on all counts, and ends up with a sentence somewhere between 20 years and life?

Click here to post a comment
Heidi: It was always KAR’s plan to cultivate a squad of sexy assassins, blackmailers, etc.
Bangkok: Rainbow Cultural Garden no worse than any religious sect school – like Amish or wackadoodle Christian schools