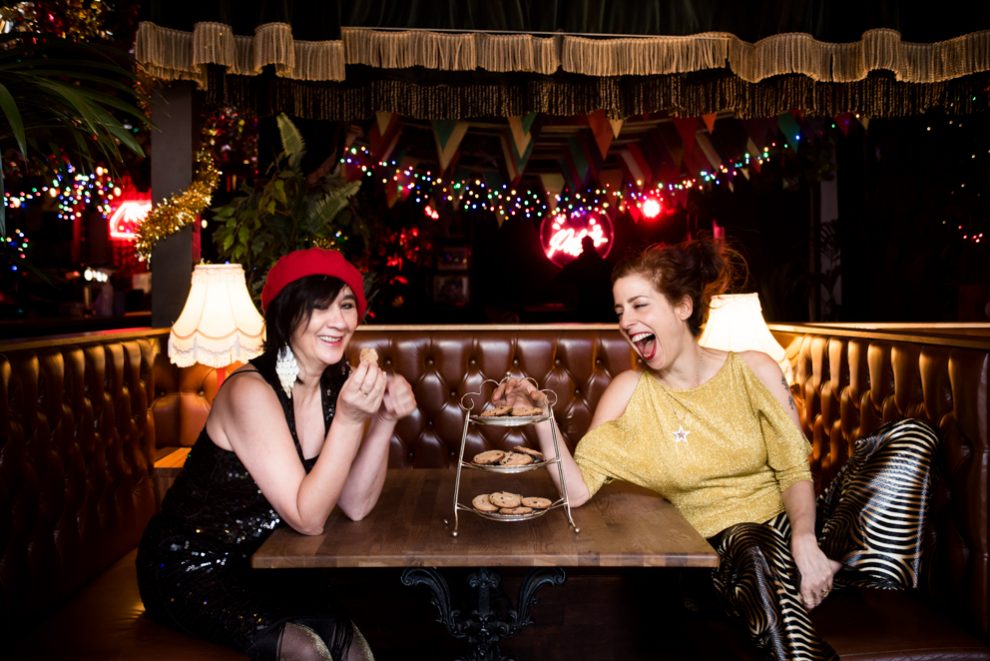 Disco-Nect
29 March 2019
The Scratch and Sniff ‘Cookie DJs’ create live-mixed improvisational dance music firmly rooted in Disco grooves and sprinkled with classic Bhangra, Electro and Reggae sounds – all while baking small batches of gourmet vegan cookies live on stage, which they serve to salivating crowds. It’s a five-sensory experience, all about fun, connection, music and love.

While living parallel lives in 1990s London as solo musicians, vocalists, songwriters and electronic music producers, Marilyn and Fiona hung out at the same clubs, recorded at the same studios and even worked at the same restaurant, without their paths ever crossing, it wasn’t until late 2016 that the duo finally met in Scotland. Marilyn was in the audience at The Art School, Glasgow to see Michael Rother of Neu, and was floored by Fiona’s audio-visual electronica supporting performance. “The seas parted for me, I knew I was going to be her friend and play music with her”, Marilyn recalls.

They discovered a mutual love of Disco, and Marilyn suggested they resurrect her New York collective, DJ Scratch and Sniff. At that time each were busy with their own solo projects, Fiona was touring to promote her experimental electronic album ‘Alien Lullabies’ and Marilyn was over from Brooklyn for a UK tour of her own avant-groove album ‘Leaves, Sadness, Science’. After becoming totally besotted with Scotland while on tour, Marilyn re-located to Edinburgh in 2017, and finally in early 2018 the DJ Scratch and Sniff plan was fully baked and made ready to be served up to the public. After a storming debut gig at Irvine Welsh’s book launch, they went on to perform at Edinburgh’s Meadows Festival, Kelburn Garden Party and the Edinburgh Fringe pop-up venue, Fireside.

Their debut single ‘Disco-Nect’ will be released on 29th March on the Colliderscope imprint, with remixes from London producer/DJ Robot 84, and Berlin-based Grunberg. 2019 shows include the Neu! Reekie relaunch at Leith Theatre, Edinburgh, on 22nd February, a Brexit day commiseration/single launch party/’Disco Ceilidh’ with Deveron Projects Aberdeenshire on March 29th, and Liverpool’s Threshold Festival on March 30th.

Marilyn Carino gained notoriety as the singing and songwriting half of Brooklyn, NY-based “post-trip hop” band Mudville. Her contributions to Mudville’s three critically-acclaimed albums were lauded as “Nina Simone coming back from the dead to front Morcheeba” (New York Times). Carino has written, recorded and/or performed with members of R.E.M, Neil Young and Crazy Horse, David Byrne, and legendary producers Sly and Robbie. Her songs have been featured prominently in the sci-fi TV series ‘Regenesis’ as well as several feature films and her song ‘Wicked’ won an Independent Music Award for Best Song.

Fiona Soe Paing is known for her mesmerising, surreal audiovisual shows combining her off-world electronica and live vocals with animation by collaborator Zennor Alexander. ‘Alien Lullabies’ has been performed in New Zealand and throughout the UK, and the show in the Edinburgh Festival Fringe was selected by Creative Scotland’ for their curated ‘Made In Scotland’ programme of the best in Scottish performance in the Fringe, 2015. The soundtrack album of Alien Lullabies, was released as Fiona’s debut solo album in 2016. Critical feedback included “stunning debut” by Electronic Sound magazine, and “a bewitching and powerful album” by Almost Predictable. Radio play has included the BBC World Service, live sessions on BBC Radio 3 for the “Exposure” series and the Vic Galloway show. Fiona has performed alongside Brit Award winner Beth Orton, legendary bassist Danny Thompson and SAY award winner Kathryn Joseph. Fiona is also curently working with National Theatre of Scotland, on a collaborative piece for the Just Start Here Festival of new Scottish work in Aberdeen.

“DJ Scratch and Sniff are amazing. They played the Meadows Festival after-party and had everyone on their feet dancing. Not only are they great DJs but they bake cookies at the same time as creating organic, feel good music full of soul. I mean, real cookies that they offer the crowd! Highly recommend checking out these badass ladies – definitely not your run of the mill DJs”. – Johanna Hartley-Zels, producer, Meadows Festival events

“Imagine you’re dancing around in your underwear at home to your favourite music while smelling your favourite comfort food. You’ve never felt more like a sexy beast and everyone’s your friend. Now you know what a Scratch and Sniff performance is like. They are the cure for all negativity.” – Michael David, Director and Curator, Life on Mars Gallery, Brooklyn, NY