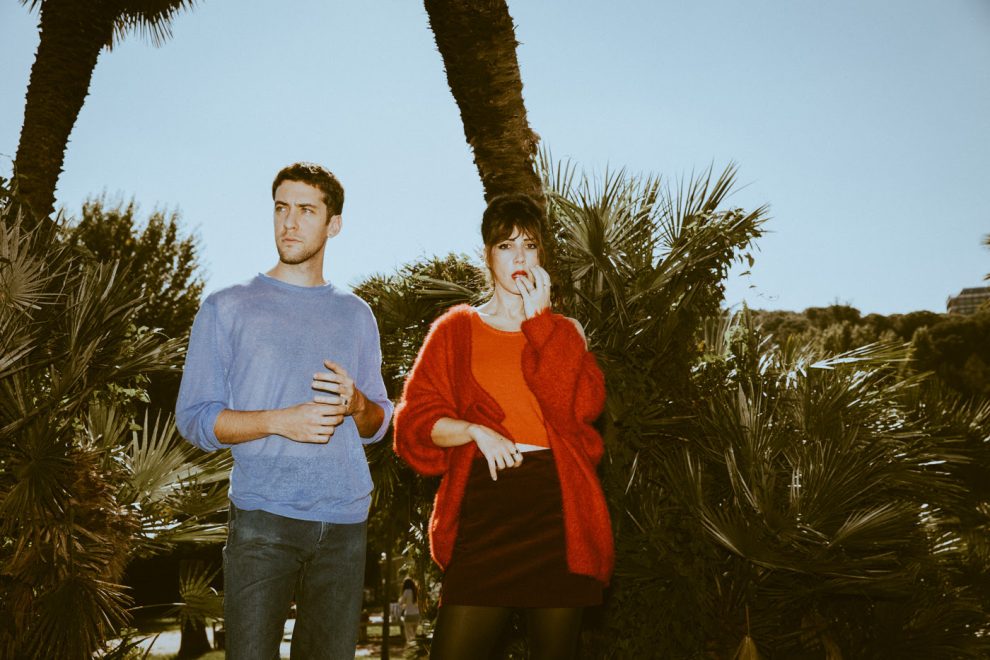 Lo-fi pop duo Malihini, aka Rome-based couple Giampaolo Speziale and Federica Caiozzo, have premiered the video for their single “Delusional Boy” with Rolling Stone Italy. Taken from their forthcoming debut album Hopefully, Again (out through Memphis Industries on 8th March). The duo has also announced they will be playing The Great Escape Festival 2019.

Directed by Nick Middleton (Dutch Uncles), the video sees Giampaolo and Federica star in a modern rendition of the ancient Greek story of Orpheus and Eurydice, as Nick explains:

For ‘Delusional Boy’, I wanted to flip the gender switch on the Orpheus story; in my version, Eurydice must rescue Orpheus from the underworld. The story takes a twist after the fated gaze – transporting the lovers to a kaleidoscopic world of colour. Who or what is that ghost made of fabric? Everyone I’ve shown the video to has asked me that. I’d prefer to leave it open to interpretation. Some things haunt us through life, but they can be banished if we really try.

We made the video over four days in Tuscany and Ostia, near Rome. I was inspired by Tarkovsky’s Italian film ‘Nostalghia’ – one of the locations, the abandoned church with a stream running through it, is from that film. Apparently, it was built on an old pagan temple that the locals thought of as the entrance to the underworld. I heard that the women in this area are known as being particularly strong, and I could certainly feel that in the scene we shot there when Fedi rescues Giampaolo. Fedi’s acted in Italian films before and she knew instinctively what I wanted. Together they have this really magnetic energy and I think that really comes out of the screen at you.

Malihini has been attracting attention since their first singles were released in 2016, earning praise from the likes of Clash Magazine, GoldFlake Paint, Line of Best Fit, Consequence of Sound, Stereogum,DIY and Wonderland for tracks that marry a European pop sophistication to a DIY aesthetic.

The project first coalesced in Speziale’s native Rome, with their first encounter occurring at 5am one morning in 2015, when Speziale, driving back to Rome, picked up a distraught, hitchhiking Caiozzo.

“I took her home – she was having a hard time with her ex-boyfriend”, he recalls. “I didn’t see her again for two or three months, but then we met by chance at a concert. We sort of avoided each other at first… eventually we spoke and later we went back to her house. We’ve been together ever since”.

The idea of working artistically together took time to germinate, however. “I’ve always been drawn to male musicians and singers”, admits Caiozzo, “but we decided not to play or sing together at all at first. Then we took this trip through Italy, Germany and Poland and eventually we thought, ‘Why not?’ So we started writing ideas for songs and ended up playing shows together in small bars along the way.”

The pair subsequently relocated to London, where they signed with Memphis Industries in 2016, debuting with a hypnotic single, “Waiting”, towards the end of that year, with another, “Miss”, following in early summer 2017, as the band began playing around the capital, building buzz following opening stints for Warpaint and Haley Bonar. They then retired to the island of Vulcano, off the coast of Sicily, to being work on their debut album, before relocating to rural Wales to record with producer Richard Formby (Wild Beasts, Spacemen 3, Darkstar).

“We always wanted to have just a few instruments,” says Speziale, explaining the band’s minimalist approach to the record. “We write using only a guitar, a Casiotone keyboard, a toy synth and a drum machine. We’d start with loops and then just improvise melodies over the top, not listening back for three or four hours”. The lyrics would come later. “Some of the songs definitely take inspiration from personal events in our life, but sometimes I imagine things from someone else’s perspective”, says Speziale, reflecting on Malihini’s candid, personal narratives.

The title track, “Hopefully Again,” premiering today with a DIY visual accompaniment created by the band, is a case in point: its languid drums and woozy electric guitar hook-line ushering in a sort of conversation between circling lovers – Caiozzo taking the first verse, Speziale the second, the two combining for the redemptive and addictive “Love is coming back” chorus line.

“It’s about when you’re first really into one another”, explains Speziale. “When you try to be someone, as seen through the eyes of the other”.

The album closes with ‘Song #1’, so named as it was the first composition the couple ever embarked on together during their odyssey through Germany. A slow-building ballad that eventually takes flight on brushed guitar chords and bell-like glockenspiels, it comes to a brief but glorious, almost gospel-like climax, the two vocalists at their most soaring and enmeshed delivering what is tantamount to a hymn to vulnerability (“All of our terror at sea/And a breakable, breakable me”). It’s an apt place to close, Malihini at once embodying fragility, yet doing so with the élan, confidence and simpatico synergy of artists-cum-lovers who have found their perfect idiom.