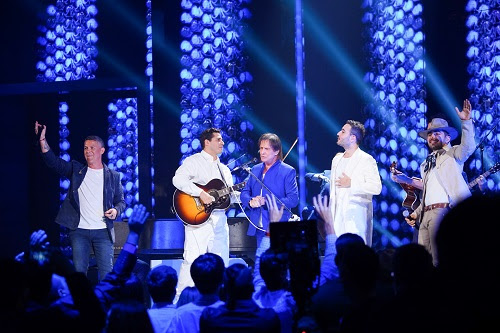 Roberto Carlos, the best-selling Brazilian singer and songwriter of all time, finds himself at the peak of his career, thanks to the star-studded tribute and Lifetime Achievement Award he recently received. He also has a new album and single out, and will launch his international tour in early March.
During the 31st annual Premio Lo Nuestro awards which took place February 21 in Miami, millions of Univisión viewers witnessed a gorgeous tribute to this artist who has delighted generations of Latinos with his music for over 55 years.
The young Mexican singer and songwriter Joss Favela kicked off the festivities, singing “Amigo,” Roberto’s chart-topper from 1978. The Mexican pop group Reik performed “El Gato Que Está Triste y Azul’’ his big hit from 1972. The audience got to its feet when Roberto appeared on stage, accompanied by the Spanish singer Alejandro Sanz. They performed “Esa Mujer”, a song included on Roberto’s latest album Amor Sin Límite. For the grand finale, all of the artists gathered on stage to perform his classic song “Un Millón De Amigos”.
At the end of the medley, Alejandro Sanz presented the Lifetime Achievement Award to Roberto Carlos, emphasizing the importance of his musical legacy for millions of Latinos around the world.
His latest single “Que Yo Te Vea” is a new song with a retro feel, thanks to its instrumental blend of guitars and percussion and its touches of salsa and mambo. Amor Sin Límite includes three other brand-new tracks, plus six Spanish versions of songs that he had previously recorded in Portuguese. From front to back, it’s a gem from Brazil’s most beloved vocalist of all time.
In early March, Roberto will launch an international tour that will take him to the United States, Argentina and Europe. See below for details.