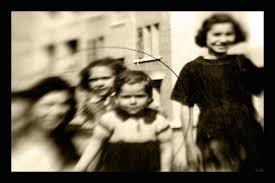 The Jewish Community Center of Greater Buffalo will be presenting Robert Hirsch’s Ghosts: French Holocaust Children, a haunting photograph installation that commemorates the lives of French children murdered during the Holocaust. Hirsch is an artist, curator, educator, and historian, former Executive Director and Chief Curator of CEPA Gallery, founder of Southern Light Gallery, and co-founder of North Light Gallery. His work has been exhibited internationally in more than 200 solo and group shows and he is an author whose books include Seizing the Light: A Social & Aesthetic History of Photography. The exhibit will be on display in the Bunis Family Art Gallery at the Jewish Community Center Benderson Family Building, 2640 North Forest Road, Monday, May 6 – Friday, June 28, and is free and open to the public during JCC business hours.

Ghosts: French Holocaust Children, tells the history of how during World War II, more than 11,000 Jewish children were deported from France to Auschwitz and other Nazis death camps in convoys that continued until Paris was liberated on August 18, 1944. It’s a three-dimensional  installation of  sculptural and photographic work, which acts as an ethereal commemoration to these children’s abbreviated lives. The project  was created  based on documents and photographs collected by author, lawyer, and Nazi-hunter  Serge  Klarsfeld, whichhave been reinterpreted and presented in the form of three 1/5-scale boxcars containing over 600 expressionistic portraits of the deported children, plus a series of mural-sized individualportraits.

“It   makes a case that  contemplative picture-making can imagine the unimaginable. This  encourages viewers  to  foster  different  ways  of  understanding  the Holocaust (genocide) that cannot be achieved through traditional documentary photography, encouraging both critical thinking and empathy,” says Hirsch.

“It’s special because Robert Hirsch, the photographer, has taken these pictures of French children whose lives were lost in the Holocaust, put them into smaller scale boxcars on the wall, has put them into large scale portraits, and consequently created a powerful and moving exhibit, “says Casey Weber, executive director of the Fairfield University Art Museum where the exhibit was recently on display.

A free Opening Night Reception takes place Monday, May 6, 2019 from 7pm—9pm in the Lippman Lounge (2nd floor) and Bunis Family Art Gallery at the JCC Benderson Family Building. The evening will include a light reception, tours of the gallery, and the opportunity to meet the artist.

In conjunction with the exhibit, and the JCC Book and Arts Fair, Hirsch will deliver a lecture presentation: “Ghosts: An Artistic Mediation on the Holocaust and Anti-Semitism.” The lecture and discussion will take place in the Lippman Lounge at the JCC Benderson Family Building on Wednesday, May 22 from 7pm—9pm. Hirsch will examine the artistic, cultural, political, and personal principals that informed his art exhibit, Ghosts: French Holocaust Children. He will discuss how he created the installation, the history that informs the project and Israel’s place on the world stage. Additionally, Hirsch will review the interconnections involving photography and history.

“My hope is that this exhibit will reach further than the Jewish community and that people will take the opportunity to visit the exhibit, attend the lecture and reflect on the realization of how important it is to remember history, to continue to share the stories, and to learn from the past,” says Katie Wzontek, Cultural Arts Director at the JCC.  The exhibit does not include written text or labels however the saying “A picture is worth a thousand words” holds true and the untold stories of these children, whom we have no connection to becomes a part of us,” says Wzontek.

“The involvement of the Buffalo Jewish Community Center is critical as change is the result of local action.  In this time of rising anti-Semitism and as remaining survivors pass-on, it is vital to keep the knowledge about the Shoah alive so that future generations can call out and act to counter barbarous behavior from being inflicted upon any group of people,” says Hirsch.