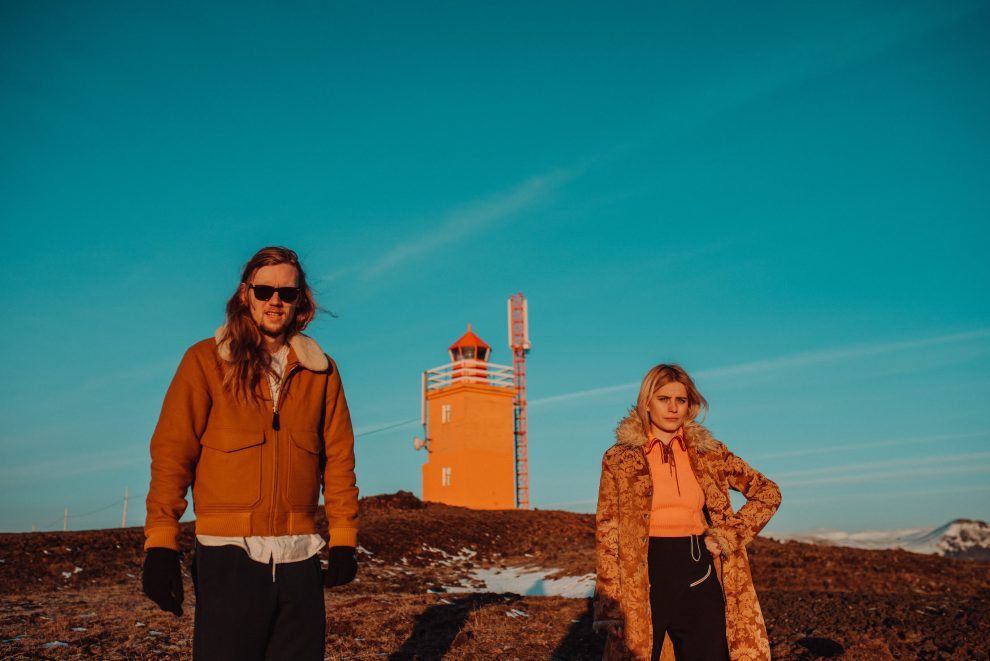 Today, Icelandic/Russian Psychedelic duo (take a deep breath, that was a lot), Pale Moon, share their debut single “Exile.” The track is the first to be released off the band’s upcoming EP, Dust of Days, expected April 5th, 2019.

After taking a spiritual and solitary journey to give his music the time and focus it deserved, Arni (vocals, instrumentals), recorded “Exile” somewhere during those outlawing days on his own to underline the feeling of his newfound lonesome working experience. All the while, Nata (vocals) was supplying him with a constant chain of new ideas for songs.

“It’s the first song that was recorded for the band. The main theme and idea for the song was written in Mexico on a banged up guitar while we were visiting friends there. On the plane back to Iceland I was whining about never having time to work on music due to daily errands. Nata said: quit your yapping and take your music gear to your parents’ farmhouse in the country site. My parents had recently bought a new farm where they moved their whole horse breeding operation, so the old farmhouse was basically up for grabs.

I moved my whole studio there and started working on “Exile” and “Waiting for the Sun” which are the two songs that we wrote on that Mexico trip. The title of “Exile” has nothing to to with the lyrics but I just had read Keith Richards biography, in that book he’s talking about the Rolling Stones record “Exile on Main street”. I was very inspired by that amazing record as with the whole idea of seeking exile to get away from life for a while to work on your kraft.  The song opened op a new chapter of our lives and made us take our songwriting collaboration more seriously.”  — Arni of Pale Moon

Pale Moon — something that can sound as moon condition we yet have to discover is in fact an upcoming musical duo from Reykjavik — Árni and Natasha. This Icelandic/Russian Psychedelic group carved their path in music with haunting, captivating melodies and lush Neo-Psych textures that might sound as well as it came from 70s. The collaboration began in the Catalan city of Barcelona where they first met. It wasn’t until a month trip to Mexico the power duo crafted their first demos and decided it was time to pull up the sleeves and record these massive mama jams.

Inspired by the Rolling Stones album “Exile on Main St.”, they set up a recording studio in an old farmhouse in South of Iceland. Árni’s parents, who used to breed sheep and prize winning stallions there, moved the operation to another land and lucky for Pale Moon it was vacant. It seemed like the only way to escape everyday hustle and bustle of the city and give music time it deserved. Arni took on his own spiritual and solitary journey.

The first song he recorded during those outlawing days was the song “Exile”, to underline his feeling of this new lonesome experience of working. Supply of new song ideas came constantly from Nata and EP started to take shape. They asked a fellow musician from the powerful Gudjonsson family to mix the tracks. Arnar Gudjonsson took on the task gladly, who is notable for work with bands like Leaves, Kaleoand Warmland. In 2018 started off on the small stages of Reykjavik, band practiced their show in Mexico providing some good vibes for the kind locals.

Natalia Sushchenko, who prefers Nata or Natasha, was raised in the cold and unforgiving landscapes of Siberia. Later she escaped, in the middle of the night, due to her political and feministic beliefs. She started her explorations in music back in Russia. She took part in small bands, but decided to take a road in design eventually. She scored a paid scholarship in Barcelona and graduated in fashion. Árni was the one to suggest they should record her songs. Her main influences, Carol Kind, Fleetwood Mac and The Doors shaped Natasha´s songwriting style.

Árni Guðjónsson was born and raised in Iceland. He’s been playing in bands before he could speak. His first band, Royal Funclub got some local approval when he was just 13, but the breakthrough in his career happened in 2010. Raggi, his flatmate invited Árni in a new band “Of Monsters and Men” for his piano skills and it didn´t take long for their first album to become platinum around the world.

But Arni left the band due to a vicious love triangle and because he knew too much. He participated in many projects and bands. Arni has released music with Prog-balkan band Orphic Oxtra, who performed for KEXP. One Week Wonder is another project worth mentioning. The band released one album ”Mars” in Iceland and Netherlands. In 2016 they won the “video of the year” prize in the Icelandic music awards and went to play at SXSW in Austin,Texas in 2018 and were the least talked about band.