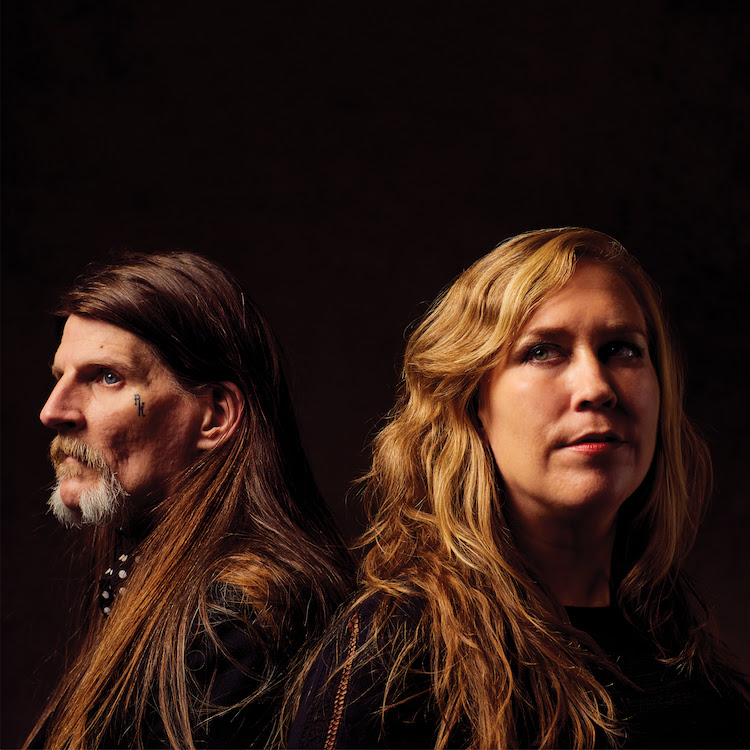 Commemorating thirty trips around the sun as one of metal’s most monolithic bands, Earth have announced plans to release their ninth studio album, Full Upon Her Burning Lips. A purge of the embellishment and panache from previous releases, Full Upon Her Burning Lips intimates Earth’s commitment to the minimalism of their primordial days.
Deconstructing the tried-and-true dynamic consisting of Dylan Carlson on guitar and bass and Adrienne Davies on drums and percussion,Full Upon Her Burning Lips taps into the Platonic ideal of Earth—an incarnation of the long running band bolstered by the authority of purpose, where every note and every strike on the drum kit carries the weight of the world. In addition to scaling back the flourishes of their hulking, drone-driven opuses, Full Upon Her Burning Lips was composed sans narrative, relying instead on their collective subconscious to hone in on the overarching muse as the songs developed.
The record was engineered, mixed, and mastered by longtime associate Mell Dettmer at Studio Soli. Showcasing Carlson’s sepia-toned Bakersfield Sound guitars and Davies’ death knell drums, Full Upon Her Burning Lips mines for the expressive, nuanced, and tonally rich components of Earth’s arsenal of sound. And indeed, anyone that’s followed Earth on their journey will bask in the unadulterated hums, throbs, and reverberations conjured by Carlson and Davies.
“I wanted this to be a ‘sexy’ record, a record acknowledging the ‘witchy’ and ‘sensual’ aspects in the music… sort of a ‘witch’s garden’ kind of theme, with references to mind altering plants and animals that people have always held superstitious beliefs towards. A conjuror or root doctor’s herbarium of songs, as it were,” Dylan Carlson said of the record’s aspirations.