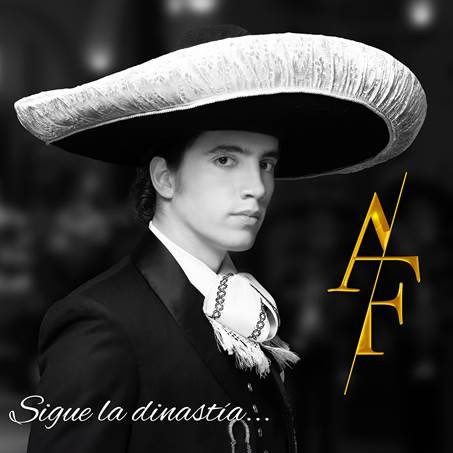 Sigue La Dinastía – that’s the title of the mariachi-themed debut album by Alex Fernández. A production that combines the best of Mexican tradition with the talent, poise and energy of a worthy heir.

Less than six months ago, he released his debut single “Te Amaré”. Last month, we were treated to second single “Lo Primero Que Haría”, which has surpassed 8 million streams on digital platforms. Alex has also performed live to enthusiastic audiences.

As Alex has noted in several interviews, work on Sigue La Dinastía began as soon as his grandfather, the Living Legend Vicente Fernández, discovered his vocal gifts. Though Alex hadn’t intended to pursue a musical career, he realized that he couldn’t hide his abilities from ranchera-music fans, a gift that this album makes ample use of. With the guidance of Don Vicente, he has worked hard to honor the family tradition.

Knowing that fans of his father and grandfather would hold him to the highest of standards, Alex was gratified when “Te Amaré” crossed generational lines to hit #1 on the monitor LATINO Mexican airplay chart, which tracks 700 terrestrial radio stations.

In addition, he has captivated audiences with his live performances at radio festivals, including shows at Mexico City’s Foro Sol and Arena Ciudad de México. Audiences have come away impressed with his maturity and confidence on stage and on the microphone.

Sigue La Dinastía… features songs written by such prominent composers as Gustavo A. Santiago, Manuel Monterrosas, Luis Elizalde and Massías. The album features production by Francisco Javier Ramírez López, who has worked with the Fernández family for years, with executive production by Vicente Fernández himself.

Ensuring that mariachi remains a vital force on the contemporary music scene, Alex invigorates this genre with his passion and his unbridled energy. Sigue La Dinastía is the work of a promising talent, of an heir to the Fernández tradition, as he comes into his own as an artist in full.