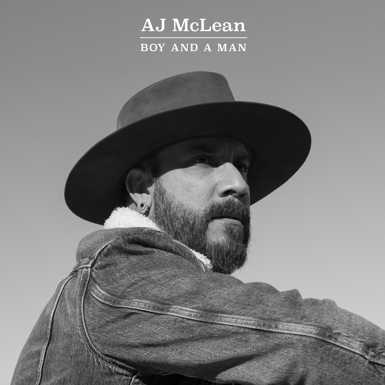 AJ McLean has released the moving video for his gorgeous new single, “Boy And A Man” today! The video, produced and directed by René Elizondo is a beautiful tribute to everlasting love and the bond between two people who grow together, live with and for one another, and the devastating reality that time will eventually separate even the strongest of love. The aesthetically stunning “Up” inspired video was filmed at Disney’s Golden Oak Ranch and features a cameo from McLean’s real life wife Rochelle McLean. The video also has an epic twist with McLean taking on a very special (and surprising!) role… This is a definite must see! Catch the video now on CMT and CMT Music. The single was amongst the top ten most added at country radio last week alongside artists like Maren Morris, Jason Aldean, and Dierks Bentley and premiered with People Country.  AJ will play the song live when he performs at the 7thAnnual ACM Party for a Cause® in Vegas next month.
“Boy And A Man” is a perfect intro into AJ’s upcoming LP, “Long Road” set to hit later this spring. The single, written by Rob Crosby (Lady Antebellum, Martina McBride) and Dave Fenley (NBC’s The Voice) and produced by Jason Massey (Kelsea Ballerini) is a perfect showcase of heart and soul, an invite into AJ McLean’s world, a story of longing and love wrapped in his signature throaty vocals and a melody that’s all twang and warmth. Of the track, People Country states, “AJ McLean is officially making his mark in the country music world!” “Boy And A Man” is available to stream and purchase everywhere now!
No stranger to the country world, AJ and the Backstreet Boys teamed up with multi-platinum selling Florida Georgia Line in 2017 for the hit single “God, Your Mama, and Me,” off their Dig Your Roots album. The much buzzed about collaboration included a performance of the #1 single (as well as the Backstreet Boys’ “Everybody”) at the 2017 ACM Awards and a joint CMT Crossroads showcasing both of the groups biggest songs, as well as a stadium tour that saw them performing to sold out crowds across the country. The Backstreet Boys and Florida Georgia Line won the 2018 CMT Award for Performance of the Year and the Backstreet Boys performed their hit single, “Don’t Go Breaking My Heart” live at the awards show. Hard at work in Nashville on his first solo LP aptly title “Long Road“, AJ has spent the past year immersing himself in the sound he loves with the likes of acclaimed songwriters Clint Lagerberg (Keith Urban/Blake Shelton/Rascal Flatts) and Brett Tyler (Maren Morris/Chris Young/Joe Nichols).
There’s the AJ McLean you think you know: the member of one of the most successful groups of all time, the multi-platinum selling Backstreet Boys. A group that has become the best selling boy band in history, having sold over 140 million records, and have earned themselves a star on the Hollywood Walk of Fame. Then there’s the real AJ McLean, the ultimate trendsetter and a raw singer/songwriter, an artist dripping with soul and bare emotion. A legend of the 90s boyband era, AJ has always been a cultural vanguard. You’ve seen him in the front row at New York Fashion Week, you’ve seen him on stage, on the small screen and even on the big screen and now you’re going to see him at his best…