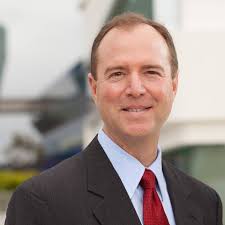 The plot deep within the Justice Department to bring down President Trump is but one of three legs: The DOJ/FBI maneuver has been given covering fire all along by the media, and it has been buttressed by members of the Congress, whose unhinged behavior has seriously eroded that institution’s credibility.

No one has been more eager to get in front of the cameras and spout knowingly false conspiratorcy theories than Adam Schiff, the California Democrat who is, remarkably, chairman of the House Permanent Select Committee on Intelligence.

We are asking that Rep. Schiff be investigated in connection with recent revelations that he met with Simpson in Aspen, Colorado, in July 2018 and that he and his staff coordinated with Michael Cohen on Cohen’s recent testimony to congressional committees. Cohen’s testimony is alleged to be false in several important respects.

You will recall that we filed an ethics complaint on April 13, 2018, against Rep. Schiff and Rep. Jackie Speier (D-CA) for improperly confirming classified information in violation of House rules but the Committee has yet to take any public action on the complaint.

Rep. Schiff has an ethics problem. His and his staff’s irregular communications with anti-Trump witnesses reflect poorly on the credibility of the House and its committees’ investigations. It has long been apparent that Rep. Schiff can’t be trusted to lead the Intelligence Committee, so we hope that Democrats on the Ethics Committee stop protecting Mr. Schiff and take action.

In our complaint we elaborate on our concerns:

Judicial Watch is a non-profit, non-partisan educational foundation, which promotes transparency, accountability and integrity in government and fidelity to the rule of law. We regularly monitor congressional ethics issues as part of our anti-corruption mission.

This letter serves as our official complaint to the Office of Congressional Ethics (OCE) concerning the activities of Rep. Adam Schiff. Rep. Schiff appears to have violated House Code of Official Conduct, Rule 23, clauses 1 and 2, by inappropriately communicating with witnesses. Clauses 1 and 2 provide:

At the time of the encounter, Simpson was an important witness in the House Intelligence Committee probe who had given sworn testimony about alleged, but still unproven, collusion between Russia and the Trump campaign.

Mr. Simpson’s leadership of Fusion GPS and his centrality to events resulted in his having to testify before congressional committees or their staffs. Specifically, Mr. Simpson testified before the House Intelligence Committee, of which Rep. Schiff was the ranking Democratic member, on October 16, 2018 – approximately three (3) months after the Aspen Security Forum.

We note that following revelations in 2017 that Rep. Devin Nunes had informed President Trump that U.S. intelligence agencies had been engaging in “incidental collection” of his campaign’s communications, Rep. Schiff demanded that Rep. Nunes, then Chairman of the House Intelligence Committee, recuse himself from any investigations involving alleged Trump collusion with Russia. Indeed, Rep. Schiff wrote the following on twitter:

This is not a recommendation I make lightly … But in much the same way that the attorney general [Jeff Sessions] was forced to recuse himself from the Russia investigation after failing to inform the Senate of his meetings with Russian officials, I believe the public cannot have the necessary confidence that matters involving the president’s campaign or transition team can be objectively investigated or overseen by the chairman.

The July 2018 contacts between Rep. Schiff and Mr. Simpson create, at a minimum, the appearance of impropriety. As a result of Rep. Schiff’s previously undisclosed, private discussions with Mr. Simpson, the public’s confidence in Mr. Schiff’s ability to objectively and impartially carry out his duties as Committee Chair of the House Permanent Select Committee on Intelligence has been gravely damaged.

Further, Rep. Schiff’s contacts with Mr. Michael Cohen should also be scrutinized in the same light as the Simpson contacts. Journalists have reported:

President Trump’s former personal attorney Michael Cohen told House investigators this week that staff for Intelligence Committee Chairman Adam Schiff, D-Calif., traveled to New York at least four times to meet with him for over 10 hours immediately before last month’s high-profile public testimony, according to two sources familiar with the matter – as Republicans question whether the meetings amounted to coaching a witness.

The sources said the sessions covered a slew of topics addressed during the public hearing before the oversight committee – including the National Enquirer ‘s “Catch and Kill” policy, American Media CEO David Pecker and the alleged undervaluing of President Trump’s assets.

Again, Rep. Schiff’ s conduct creates the appearance of unethical collusion and synchronization of efforts that calls into question whether Cohen’s testimony was a legitimate congressional hearing or well-rehearsed political theatre.

During Mr. Cohen’s congressional testimony, he was questioned by Rep. Mike Turner concerning the number, nature and subject of his [Cohen’s] contacts with the House Permanent Select Committee on Intelligence. Rep Jim Jordan pressed Cohen on the subject in subsequent questioning. Cohen hesitantly acknowledged that he had spoken with Schiff “about topics that were going to be raised at the upcoming hearing.”

A pattern of conduct on the part of Rep. Schiff in these matters would exponentially increase the gravity of the prejudice and harm to the public’s confidence in the institution of the House of Representatives.

Rep. Schiff’s conduct and contacts with witnesses must be treated with the same gravity that Reps. Schiff and Pelosi accorded Rep. Nunes’s actions. Rep. Nunes recused himself for a time from certain oversight responsibilities with respect to the Russia-Trump investigations.

In the least, Rep. Schiff and his staff communications with Glenn Simpson and Michael Cohen, undermine the “credibility of the House” and its committee proceedings, especially given Mr. Cohen’s subsequent alleged false testimony.

We call upon the OCE to investigate Rep. Schiff and his previously undisclosed, inappropriate contact with key witnesses in congressional investigation over which that Member holds significant sway.

Thank you for your attention.

The ethics process in the House is a mess so I don’t expect something quickly to happen, but it is important that we put the House on official notice so no politician there has an excuse to let Adam Schiff’s untoward behavior slide.