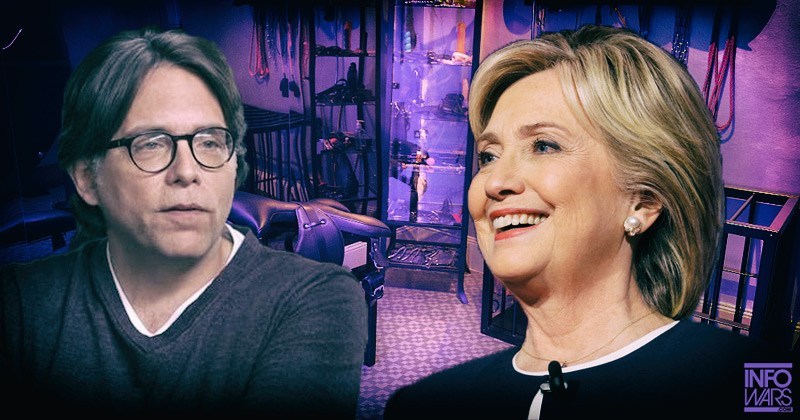 Is this an improbable story? Probably. But it’s worth reporting because even if it does not show the true world of Nxivm, it at least shows how it is perceived by others – even if they are on the fringe. The “conspiracy” website, WhatDoesItMean.com published a story, written by correspondent Sorcha Faal, claiming that Keith Raniere […]

Is this an improbable story?

Probably. But it’s worth reporting because even if it does not show the true world of Nxivm, it at least shows how it is perceived by others – even if they are on the fringe.

Both Frank Report and Artvoice are linked as sources in this story, along with the NY Post, Gateway Pundit, Heavy.com, NBC News New York, News Busters, and the Albany Times Union.

It was published March 14, 2019, the day after the second superseding indictment came out and Nancy Salzman pleaded guilty to one count of racketeering conspiracy in Brooklyn federal court.

What Does It Mean.com is not an insignificant website. Based on Alexa.com, it is ranked in the top 40,000 websites worldwide, [21,309 in USA] which would mean, I estimate, more than 1 million views per month.

Here is the story by Sorcha Faal, reprinted by permission of WhatDoesItMean.com.

By Sorcha Faal, and as reported to her Western Subscribers

A brief, but highly-classified “of special importance” new Security Council (SC) report circulating in the Kremlin today states that after Trump-Russia investigator US Attorney Andrew Weissmann attempted to force US Attorney General William Barr to keep this hoax going by continuing a cooperation agreement with General Michael Flynn this week, he was shot down in flames by Barr who quickly forced Weissmann out of the US Department of Justice entirely—that was followed hours later by Barr ordering new child pornography criminal charges to be placed against NXIVM sex slaver cult leader Keith Raniere and his reaching a guilty verdict plea agreement with this cult’s co-founder Nancy Salzman—the critical importance of which lies in the fact that the NXIVM sex slave cult has in its possession tens-of-thousands of classified emails they hacked from Hillary Clinton.  [Note: Some words and/or phrases appearing in quotes in this report are English language approximations of Russian words/phrases having no exact counterpart.] According to this report, while the American people were are continuously pummeled with false claims of President Trump colluding with Russia to win his election, being deliberately kept from them by their corrupt mainstream propaganda media is everything having to do with the sex slave cult NXIVM—a secretive organization that passed itself off as a multi-level marketing company whose members include both moneyed and celebrity elites long protected by President Bill Clinton stretching back to his time as Governor of Arkansas—and in exchange for, has seen NXIVM cult members giving uncounted millions to both former President Clinton and his wife Hillary Clinton.

One of the richest members of the NXIVM sex slave cult, this report details, is the multi-billionaire heiress to the Seagram Company business empire Clare Bronfman—who implanted a “key logger” virus on the computer of her late father, Edgar M. Bronfman Sr., so officials with NXIVM could secretly monitor his emails, including his exchanges with world leaders and Democrat Party presidential candidate Hillary Clinton.

Having complete access to these stolen Hillary Clinton emails, this report continues, was top NXIVM lawyer Doug Rutnik—who  used the information contained in them to blackmail Hillary Clinton into turning over her US Senate seat to his daughter—who is now known as US Senator Kirsten Gillibrand—and during the 2016 US presidential campaign, frequently saw US Senator Gillibrand and NXIVM co-founder Nancy Salzman paying multiple thousands of dollars to buy tables at campaign events hosted by Hillary Clinton. Being protected from criminal prosecution for over 30-years by the Clinton-Bush-Obama regimes, and by the mainstream media, too, whom this sex slave cult would launch massive lawsuits against if they even dared mention their name, this report concludes, this past March-2018, President Trump loyal forces in the US Department of Justice launched a massive attack against NXIVM with a criminal indictment showing how this cult branded women to make them sex slaves for elites—with their further capturing this sex slave cult’s leader Keith Raniere at his Mexico mansion hideaway and throwing him in jail—and whose already grim fate was made worse this week by US Attorney General Barr slamming him with additional child pornography criminal charges to make sure this monster will never walk free again—information, no doubt, obtained by Barr who successfully managed, for the first time in history, to penetrate the decades-long wall of secrecy erected around NXIVM by America’s most powerful elites with his guilty plea deal agreement with this cult’s co-founder Nancy Salzman—and whom after appearing in US Federal Court yesterday and confessing that her actions “were not just wrong, but criminal”, makes it understandable why top Clinton Family spokesman Paul Begala erupted in frightened rage and anger on CNN a few minutes later calling Trump a “criminal” and Trump’s daughter Ivanka, along with her husband Jared, “cockroaches”—and is a reaction one would expect from someone knowing the walls are not only closing in on them, they are falling. March 14, 2019 © EU and US all rights reserved.  Permission to use this report in its entirety is granted under the condition it is linked back to its original source at WhatDoesItMean.Com. Freebase content licensed under CC-BY and GFDL.

[Note: Many governments and their intelligence services actively campaign against the information found in these reports so as not to alarm their citizens about the many catastrophic Earth changes and events to come, a stance that the Sisters of Sorcha Faal strongly disagree with in believing that it is every human beings right to know the truth.  Due to our missions conflicts with that of those governments, the responses of their ‘agents’ has been a longstanding misinformation/misdirection campaign designed to discredit us, and others like us, that is exampled in numerous places, including HERE.]

[Note: The WhatDoesItMean.com website was created for and donated to the Sisters of Sorcha Faal in 2003 by a small group of American computer experts led by the late global technology guru Wayne Green (1922-2013) to counter the propaganda being used by the West to promote their illegal 2003 invasion of Iraq.]

[Note: The word Kremlin (fortress inside a city) as used in this report refers to Russian citadels, including in Moscow, having cathedrals wherein female Schema monks (Orthodox nuns) reside, many of whom are devoted to the mission of the Sisters of Sorcha Faal.]

To get an idea of some other articles on What Does It Mean, here are a few links found on the same page as the above story:

How Covert American Agents Infiltrate the Internet to Manipulate, Deceive, and Destroy Reputations

The Epistle of Saint Helena: Why German Scientists Are Sounding Grave New Alarm

War Has Just Been Declared On Me, On Me Personally—Now I Am Alone, On Enemy Territory

Former Cult Member: ‘Barbara Bouchey, get on with your life– there was no good in Nxivm’
Didn’t Enroll in Medicare Part D… Now We Owe Big Dollars!!
Comment