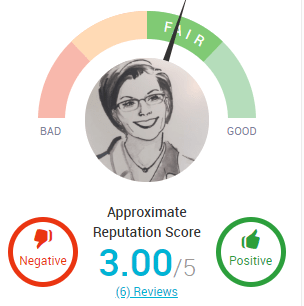 One year ago today, Vanguard was enjoying his last full day of freedom at a seaside villa in Puerto Vallarta with his slaves, Allison Mack, Nicki Clyne, Clare Bronfman, Loreta Garza and Lauren Salzman. He was to be arrested the following morning and deported from Mexico to the USA where he was charged on a […]

One year ago today, Vanguard was enjoying his last full day of freedom at a seaside villa in Puerto Vallarta with his slaves, Allison Mack, Nicki Clyne, Clare Bronfman, Loreta Garza and Lauren Salzman.

He was to be arrested the following morning and deported from Mexico to the USA where he was charged on a federal criminal complaint the same day.

He has been behind bars ever since, having failed at three attempts to make bail.

Magistrate Judge Scanlon’s report and recommendation is to admit into evidence everything that Keith Raniere and Clare Bronfman sought to suppress. A whole lot of evidence will therefore be available to the jury – if the trial goes forward and/or Judge Garaufis does not overrule her.

As for the evidence, as Nancy Salzman’s attorney said when she took her guilty plea:  “There is no viable defense’ to the charges.

The best, last hope of the defense was to get evidence suppressed so that the jury would not see the magnitude of the criminality of the Nxivm racketeering and sex trafficking enterprise.

Some of the evidence that now will most likely be admitted will be from the subpoenaed contents of a storage unit in Clifton Park. The unit was rented by one of Clare Bronfman’s Nxivm-member employees, but the contents belonged to Clare.

Clare has fought, with her attorney Dennis Burke, to suppress this evidence. it appears she has failed.

When asked by Frank Report, “Will Keith survive in prison”?, a former federal prisoner said, “Once he gets sentenced and is transferred to a regular prison, he’ll be at great risk if he’s in general population. Unless he puts himself in protective custody. There’s nothing worse than someone hurting a child. Sexual predators are walking targets for gang members to claim rank and move up in prison status. On top of that, he is a white guy who preyed on Mexican girls. This will make it really bad for him.

“If he became suicidal, one way to preserve Keith’s life would be ‘suicide watch.’ His attire would be a ‘turtle suit.’ It’s a nine-pound Velcro dress.  Its box-like shape will match his boxed feet.  But suicide watch is only a short-term option. No one stays there for more than a few days. I worked as a ‘watcher’ for a few weeks. No, Keith’s long term options are very bleak. If I were betting, I would bet that he leaves federal prison, box feet first.”

On a wonderful website, MyLife.com, Nancy Salzman’s reputation is rated. She’s doing pretty good. She is rated as solidly in the “Fair” category, neither good nor bad.
Not bad for the recently convicted leader of a racketeering enterprise.
Her bio, according to the website, is as follows:
Nancy Salzman is 64 years old and was born on 07/16/1954. Nancy’s Reputation Score is 3.00. Nancy Salzman lives in Clifton Park, NY; previous city includes Albany NY. Nancy also answers to Nancy Pike and Nancy L Salzman, and perhaps a couple of other names.

Right now Nancy is a Cult Member at NXIVM. Currently, Nancy is single. James Pike, Michelle Salzman, Michael Salzman, Lauren Salzman and Edna Chura, and many others are family members and associates of Nancy. View All Details 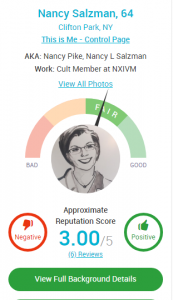 The Votes Are In – And We Have Two Winners
Branding Dr. Danielle Roberts to appear as guest at Science of Human Optimization Conference on April 27–28 in Long Island at Hyatt Regency
Comment